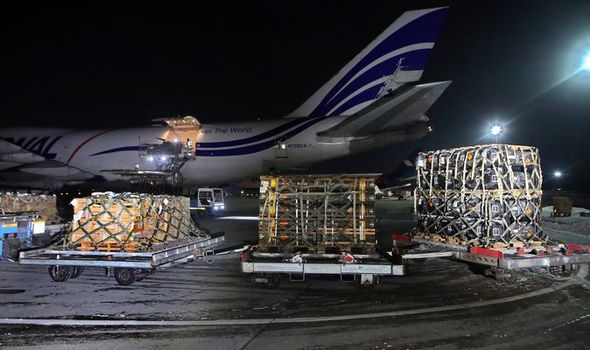 Ukrainian leaders are insisting the situation is “under control” and there is “no reason to panic”. As 127,000 Russian soldiers massed on the border and it launched new military exercises, defence chiefs in Ukraine admitted the situation could change quickly. It said the number was “not enough for a full-fledged offensive”.

Deputy defence minister Anna Malyar said: “The Russian Federation uses the concentration of troops near our borders primarily to politically blackmail the West and put pressure on Ukraine. Russia’s tactical goal is to provoke internal divisions in our society, sow fear and panic, destabilise the internal situation.”

Ukraine’s national security and defence council chief, Oleksiy Danilov, said Russia’s forces had not formed battle groups “which would have indicated that tomorrow they would launch an offensive”.

James Heappey, UK Armed Forces Minister, revealed intelligence pointed to Russia having already sent an advance force into Ukraine. Former MI6 head Sir Alex Younger said it was “hard to see how [Putin] can avoid having to follow through to some extent”.

Looking for a new home, or just fancy a look? Add your postcode below or visit InYourArea