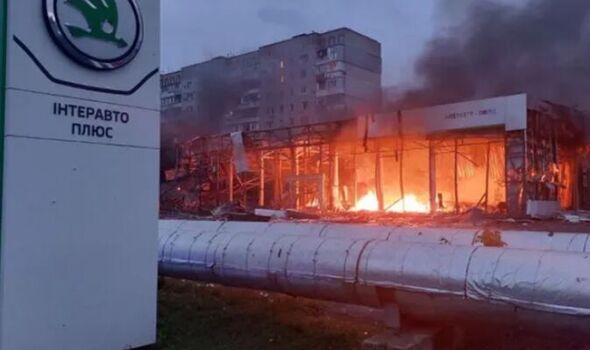 Russia has unleashed fresh missile strikes, hitting a school and killing one person at a car dealership in Ukraine. The attacks came as air raid sirens rang out across the country.

Residential buildings and a medical facility were also struck as Russian rockets rained down on Zaporizhzhia.

Explosions were heard across the city in the south of Ukraine as Putin reportedly launched a dozen S-300 missiles. It comes after Russia unleashed a barrage of missile strikes across Ukraine in revenge for Kyiv’s attack on a bridge linking Crimea to the Russian mainland last Saturday.

Blasts were also heard in Odessa and Vinnytsia along Ukraine’s Black Sea coast. A Russian missile was shot down by fighter jet over Kyiv.

It comes as raid sirens were activated across every region in Ukraine.

“Two rockets hit a car dealership, as a result of which one person died, a fire broke out, and the emergency services managed to put it out.”

Firefighters were seen battling a huge blaze at a Skoda dealership where one person was killed.

Video footage shows sheets of metal and a mangled body strewn across the ground. Another shows an apartment block with its windows blown out.

READ ABOUT A BRUTAL SEAGULL KILLER BEING JAILED 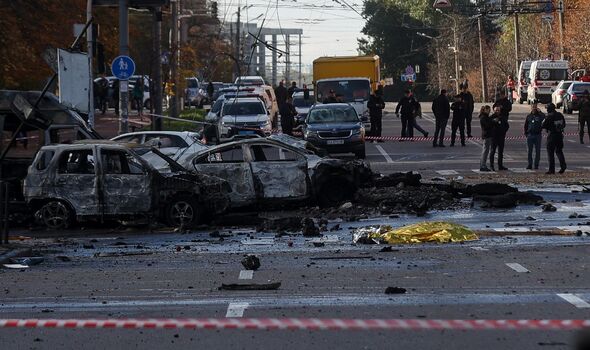 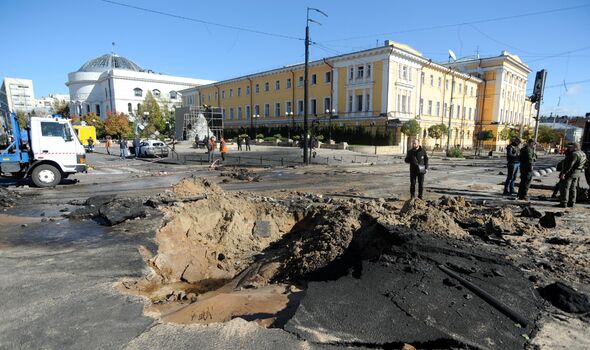 He wrote on Telegram: “As a result of the morning rocket attack, an educational institution, a medical institution and residential buildings were also damaged. Unfortunately, there are victims. Russia is a terrorist country.”

Meanwhile, the Ukrainian emergency services have put all of Ukraine on alert for more missile strikes.

Officials warned on the Telegram messaging app: “During the day there’s a high probability of missile strikes on the territory of Ukraine. Please remain in shelters for your own safety, do not ignore air raid signals.”

In the most widespread wave of air strikes away from the front lines since the war began on February 24, Russian missiles rained down on Ukraine early on Monday, hitting power generating facilities as well as non-strategic targets such as parks and tourist sites, leaving devastation, terror, and power cuts in their wake.

Ukraine’s President Volodymyr Zelensky in an address late on Monday said: “We will do everything to strengthen our armed forces. We will make the battlefield more painful for the enemy.”

As many as 301 settlements in the regions of Kyiv, Lviv, Sumy, Ternopil and Khmelnytsky remained without electricity on Tuesday morning.

Faced with blackouts, Ukraine has halted electricity exports to neighbouring Moldova and the European Union at a time when the continent already faces surging power prices which have stoked inflation and hampered industrial activity.

After the strikes on Monday, the United States said Russia’s attacks on such a scale could not have been put together in just a couple of days.

White House national security spokesperson John Kirby told CNN: “It likely was something that they had been planning for quite some time. That’s not to say that the explosion on the Crimea bridge might have accelerated some of their planning.”

After weeks of setbacks on the battlefield, Russian authorities are facing the first sustained domestic criticism of the war, with commentators on state television demanding ever tougher measures.

Putin responded to Ukrainian advances by ordering a mobilisation of hundreds of thousands of reservists, proclaiming the annexation of occupied territory and threatening to use tactical nuclear weapons.

On Saturday, Russia made its third senior military appointment in the space of a week with Air Force General Sergei Surovikin taking over as commander of forces in Ukraine. He previously commanded Russia’s brutal air campaign in Syria.