A year ago, all was well in Amanda Smeltz’s professional world.

She was the wine director at the Manhattan restaurants Estela and Altro Paradiso, where her selection of hard-to-find, often naturally produced wines was a major attraction. She put together the list, educated and oversaw a staff, and was part of the management team.

Everything changed with the pandemic, and her story is similar to those of many other sommeliers around the country. She has been furloughed, then rehired, twice as New York restaurants cycled through closings, reopenings and transitions to outdoor dining.

Perhaps most worrisome, she contracted Covid-19 last May, before many of the symptoms were understood. She lost her sense of smell and taste, alarming to anybody who depends on these for a living. (Luckily, her case was mild, and she recovered quickly.)

Covid-19 has posed daunting challenges for restaurants, which were ordered to close or operate at diminished capacity while still paying their rent, often with little governmental support. When the pandemic struck, wine was one of the few resources that could quickly be turned into cash.

Some restaurants converted themselves into retail operations, offering wine to go. Others, like Del Posto, in Chelsea, auctioned off significant portions of their rare and valuable wine collections to raise money.

If anybody still saw the American restaurant business through a romantic haze, the last year has blown it away. The pandemic, along with national reckonings over racism and sexual harassment, have revealed dysfunctional, fragile businesses that largely depend on workers living paycheck to paycheck, sacrificing any semblance of the “work-life balance” that corporate America professes to want for its employees.

Along with the hard questions that will have to be considered as the restaurant industry resurrects itself, it seems almost frivolous to ask: How will wine fit in when this is over? 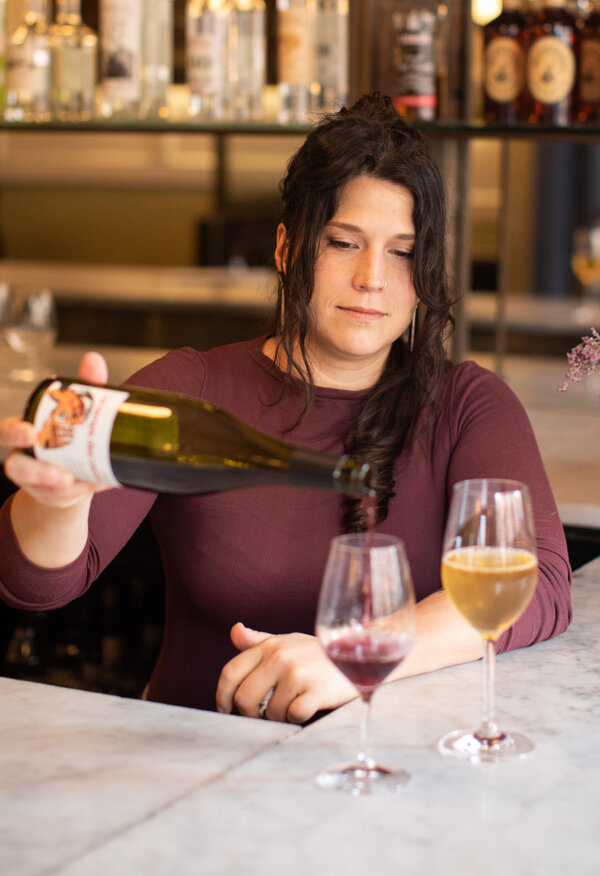 During the last 35 years, I’ve watched wine evolve from largely an afterthought in American restaurants to a central component of both their ethos and their bottom line. In the early 1980s, only a handful of the fanciest French restaurants had what were once called “wine stewards.”

Sommeliers have since became restaurant fixtures, instrumental in building American wine culture and exposing consumers to new and wonderful styles and bottles. They’ve even become figures in popular culture and films. Yet sommelier culture has also bred exploitive behavior and sexual harassment.

So, as restaurants reckon with their future, it’s worth exploring the role wine will take. Last month, I spoke to seven wine professionals, including Ms. Smeltz, about what this last year looked like and what they felt the future might bring.

Ms. Smeltz managed to persuade her bosses to hang on to most of their wine, arguing that a full selection, with the benefit of an added year of aging, would be a tremendous post-pandemic asset. She is concerned that as restaurants try to cut costs, good wine lists may be the first thing to go.

“More complex programs mean more education of staff, more training, more attention — it all translates into more cost,” she said. “It also translates into more revenue. I’m just not sure how clear that is to people who own businesses. It’s a very panicky situation right now. Everybody’s afraid.”

At Pinch Chinese in SoHo, once a bustling haven for wine lovers, the wine director Miguel de Leon has overseen the restaurant’s conversion into a retail storefront, selling food and wine for takeout and delivery. The owners over the last year were to have opened two new restaurants, with Mr. de Leon as a partner, but those plans have been scrapped.

His wine list was rich with natural wines that paired well with the cuisine. At its peak, it had more than 300 selections. He said he is now down to about 60.

“When we reopen, we’re going to have to start over from the beginning,” he said. That will give him the opportunity to devise what most likely will have to be a more streamlined selection.

Just as he is appraising what Pinch will look like on the other side, Mr. de Leon is pondering what shape a more humane restaurant model could take. Over the last year, he has thought deeply about the restaurant business, and has written passionately about how to diversify staffs and clientele, achieve more equitable pay and rectify the power dynamic that exists when servers depend on tips to make a living wage.

“We want to nourish people, we want to feed people. The fact that faces light up when they taste our food and drink our wines, that’s gratifying,” he said. “But there’s this notion that, ‘I’m paying for this, I should be able to do whatever I want.’ We want you to understand that you come first, but you’re not always right.”

When Etinosa Emokpae was hired in August 2019 as the sommelier at Friday Saturday Sunday, an intimate American restaurant in Philadelphia, she felt it was a dream job, with the chance to create her own wine list.

When restaurants closed last March, she was furloughed with the expectation she’d be back at work by summer at the latest. Instead, she has been out of a job ever since. The restaurant reopened, but it could not afford to keep on managers like Ms. Emokpae.

She has been living on unemployment benefits, she said, with an occasional side job leading a private tasting. Yet as difficult as this year has been, she feels optimistic about the future for her and for wine.

Partly, she said, it’s because she has had time to reflect on what is most important to her, a luxury that was unavailable when she was working the 70- to 80-hour week that many restaurants demand. She has decided to look for a wine job somewhere other than restaurants.

The Black Lives Matter protests and the implosion of the Court of Master Sommeliers over sexual harassment by its leaders, she said, have led to far more openness and a greater sense of opportunity for people of all races and ethnicities.

“I already see the collaborations, the conversations, seeing this kind of explosion among people who didn’t feel like they had a place in the wine world, the way information is being shared,” Ms. Emokpae said of the conversations she is seeing online.

Matthew Conway has overseen the wine list at Marc Forgione, in TriBeCa, since the restaurant opened in 2008, building it to almost 700 selections over the years, including many rare treasures from the Northern Rhône Valley of France. He also put together the list at Peasant, in NoLIta, after Mr. Forgione bought the restaurant in late 2019. Mr. Conway is a partner in both restaurants, and handles much of the managerial work.

During the pandemic, he had to auction off half the collection at Marc Forgione. “It was painful, but it was necessary,” he said.

He and his fiancée, Carissa Hernandez, left their Manhattan apartment for Charleston, S.C., where his sister, Tracé Conway, is director of operations for the Butcher & Bee restaurant group. He is not sure if he’ll ever move back to New York.

He believes this is a perfect time for restaurant leaders to reinvent the industry, making the sort of structural changes that would permit a more secure existence for workers. “We have operated for a long time with the complete understanding that the system was broken,” he said.

Like Ms. Emokpae, he feels that the past year has been a watershed, and that the wine world is finally grappling with its racial and gender inequities.

“We’re taking the view of the profession out of that white Eurocentric box,” he said. “Inclusivity is going to grow.”

As for restaurant wine programs, he imagines that middle-tier places may gravitate toward smaller lists, but that high-end establishments will build back their inventory as soon as possible.

This month, Popina, on the Columbia Street Waterfront in Brooklyn, has finally achieved a comfortable business after three years of struggle, said James O’Brien, an owner with the chef, Chris McDade. Mr. O’Brien’s wine list had built a following for its hard-to-find gems, which went brilliantly with Mr. McDade’s singular combination of Italian and Southern American cuisine.

“We had to lay off our staff, and I went into a kind of panic mode,” Mr. O’Brien said.

Quickly, they turned the restaurant into a shop, selling pasta kits, sandwiches and much of the wine collection Mr. O’Brien had so painstakingly assembled. He estimates that its value fell from $60,000 to $25,000 in a week.

With a huge backyard, Popina was able to do well in the warmer weather, but its tiny dining room is not equipped for socially distanced tables. The business is back in retail mode again.

The business model now for Popina, Mr. O’Brien said, is simply figuring out how to hold on. He remembers the more idealistic days in 2017, when the restaurant opened.

“We wanted to pay a fair wage and give people benefits,” he recalled. “You have a grand idea about how you want to make a restaurant better than the places you’ve worked, but then you do the numbers and find they don’t add up.”

Sabra Lewis left her job as wine director of the Standard, in the meatpacking district, in 2019. The stress of the long hours, and the fact that she was nearing 40 and still in debt, made her feel she was hitting a wall.

She took a job as events manager with Zachys, the big retailer and auctioneer in Westchester County, N.Y. When the Trump administration placed tariffs on a multitude of wines from the European Union in the fall of 2019, they hit Zachys hard. Ms. Lewis was laid off the following February, just before the pandemic shutdowns.

After months during which she was mostly unemployed, she managed to land a consulting position at the Island House, a hotel and restaurant in the Bahamas that needed to knock its wine list into shape. After 10 weeks there, she returned to New York, to an uncertain future.

She hopes she’ll be able to expand her consulting work, but wonders how the restaurant industry can be made healthier, given the instability of the business and its work force.

“It’s the million-dollar question: What structural changes can restaurants make?” she said. “How can we innovate our way out of this?”

The pandemic has meant nonstop innovation at King, an intimate restaurant in SoHo where Annie Shi, a partner, supervises the wine list. The restaurant has opened a takeout window, selling snacks and aperitifs. It has sold meal kits and branded olive oils and blankets. It has even started a wine club with Parcelle, a retailer near Hudson Yards, selling subscriptions for three bottles a month, selected by Ms. Shi and sent all over the country.

It’s all been a matter of survival. “It feels like we’ve opened six or seven businesses in the last year,” she said.

With wine, the pandemic has cast the difference between retail and restaurant pricing in sharp relief.

“If you are a guest, you’re more aware than ever you are going to pay twice retail in a restaurant,” she said. “What is the value you are giving your guests to make it worth that extra amount?”

She would love to reduce that markup, she said, but New York rents make that extremely difficult.

She has looked to France and Britain, whose governments have essentially paid restaurants to stay closed, allowing them to pay their employees and their other bills.

“We were put between a rock and a hard place,” Ms. Shi said. “We’re asking people to either don’t make money or come back to work and put your life at risk. I can’t think of any other industry where people had to make these creative, from-the-ground decisions.”