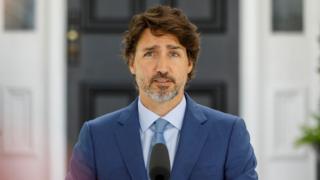 The number of threats against Canadian Prime Minister Justin Trudeau has risen compared to the same period last year, Canadian police have warned.

Figures from the Royal Canadian Mounted Police (RCMP) show there were 130 threats against Mr Trudeau and ministers from January to July.

The RCMP report follows a number of security incidents targeting federal officials in the country.

In July, an armed suspect was arrested for breaching the entrance of the estate where Mr Trudeau lives.

Mr Trudeau and his family, who are currently living at a cottage on the Rideau Hall estate while the prime minister’s official residence is being renovated, were not at home at the time of the incident.

Other incidents include attempted attacks on Governor General Julie Payette – the official representative of Queen Elizabeth II – who resides at the same estate as Mr Trudeau, and more recently, Infrastructure Minister Catherine McKenna.

Footage posted on social media showed a man shouting insults and expletives about Ms McKenna and Mr Trudeau at one of Ms McKenna’s staff members.

Ottowan MPP Lisa MacLeod was forced to go under police protection after receiving threatening emails, as well as what the Ottawa Citizen newspaper described as an unspecified “mischievous incident”.

Expressing her support for Ms MacLeod, Ms McKenna called for “better measures” to prevent threats and abuse against officials.

Daniel Brien, a spokesperson with the national police force, told the Toronto Star newspaper that the RCMP would not discuss the specific nature of the threats that the force has been tracking.

Another report, released by the Institute for Strategic Dialogue (ISD), found anti-government sentiment – specifically against Mr Trudeau – was a “highly salient” topic among far-right extremists online, along with Islamophobia and anti-Semitism.

Justin Trudeau was mentioned in 11.4% of posts made by right-wing extremist Facebook pages and groups, and featured in 28% of the YouTube content analysed, the ISD said.

“Anti-immigration and anti-Muslim themes are often tied to anti-Trudeau and anti-left sentiments, as (right wing extremist) groups and individuals’ perception that immigration is intrinsically tied to the policies enacted by Trudeau’s Liberal (party) government and left-wing politics more broadly,” the report added.

Anti-Trudeau sentiments among extremists were also tied to anti-Semitic conspiracy theories that George Soros and the UN are “deliberately increasing migration as part of a broader attack on white people”, it said.