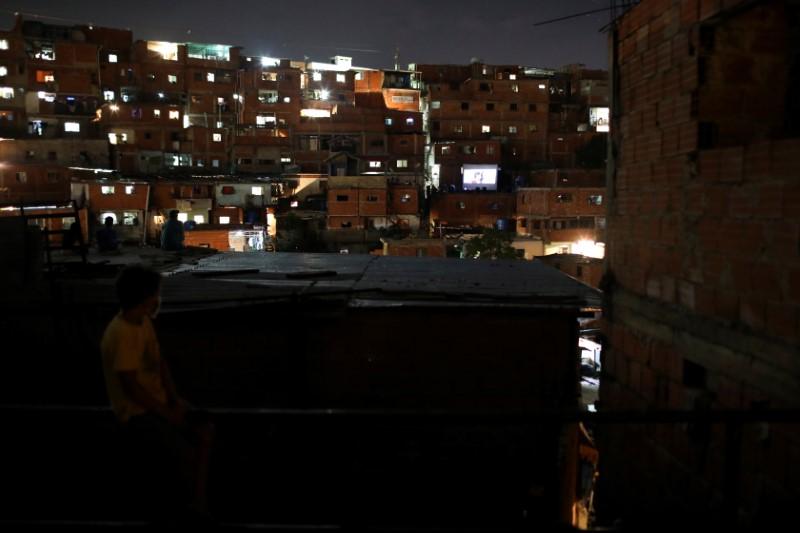 CARACAS (Reuters) – The sprawling working-class area of Petare on the east side of Venezuela’s capital of Caracas has made headlines recently for brutal gang battles that raged for days despite a nationwide quarantine to prevent the spread of the coronavirus.

But on Monday night, residents itching for activity after more than two months of lockdown placed chairs on their rooftops or sat on the thin, concrete staircases winding through the sprawling “barrio” to enjoy a public screening of the animated film Aladdin put on by a local-nonprofit.

“The only thing missing is the popcorn,” said Estefani Armanzor, 27, said from her rooftop while holding her three-year-old son, Aaron to watch the film projected on a white screen affixed to a barrio resident’s roof. “We are in quarantine and the children are very bored.”

The screening was part of a series of movie showings put on by Unloading Zone, a nonprofit that promotes peaceful coexistence in the hilly neighborhood of small, red block homes with flat roofs known for gang violence and police brutality.

Similar projects, which seek to mitigate physical isolation in the midst of the pandemic, have been developed in the favelas of Rio de Janeiro in Brazil.

Unloading Zone has also organized children’s reading sessions and orchestra ensembles, said Jover Prato, a 42-year-old activist and one of the organization’s founders.

The activities show a different side of a neighborhood that in early May made national headlines for several straight days of gunfire between rival gangs, resulting in the deployment of heavily-armed security forces in sectors of the neighborhood.

But on Monday evening, a calm had returned to the hills, with dozens of children flying kites from their roofs boasting stunning views of the valley of Caracas, and families enjoying popcorn and fried corn cakes known as arepas – a staple of the Venezuelan diet – while watching the film.

“It’s great to be hear with all our neighbors,” Armanzor said. “It would be great if they did this again.”