A train that shot through a stop block was saved from a dramatic plunge into the water below – by a sculpture of a whale’s tail.

The metro train was left balancing on the tail fins – known as “flukes” – 10m above the ground near the Dutch port city of Rotterdam.

The crash happened just before midnight and woke people living in nearby houses, but thankfully, the train’s driver escaped injury. One nearby resident said: “It was a noise that lasted two or three seconds.”

“I realized that there was something on the tail… I thought ‘Something very odd is happening here’.”

Authorities were forced to tell sightseers to stay away after scores ignored coronavirus restrictions to visit the scene where workers are trying to remove the train.

Despite this, some 50 people remained as authorities worked against strengthening winds.

“A team of experts is investigating how we can make it safe and get it down. It’s tricky,” a spokeswoman for the local security authority. 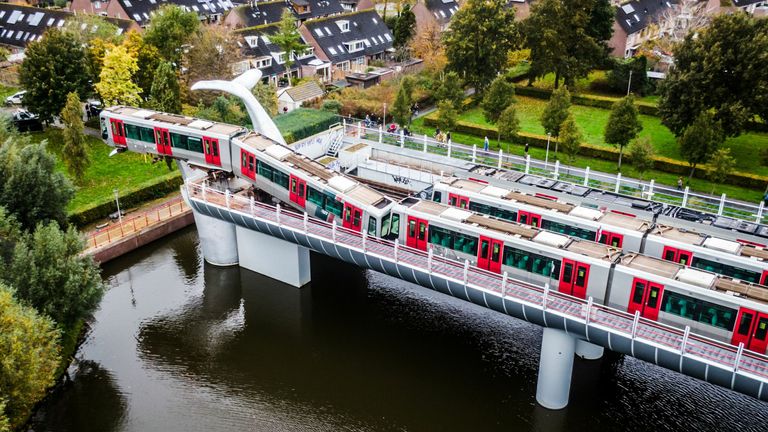 There were no passengers on the train when it crashed through stop barriers at the end of the station, which is the final stop on the line.

The driver was able to leave the train himself and was taken to hospital for a check-up.

The sculpture Whale Tails, is made of polyester and is the work of Maarten Struijs. The tails were placed in the water at the end of the metro tracks in 2002.