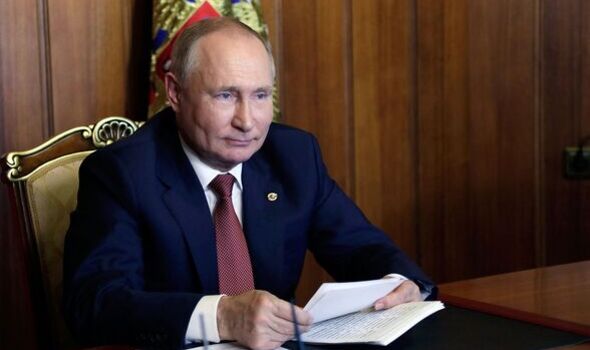 In a meeting with Russia’s defence ministry and chief of general staff, the Russian President took aim at NATO and western sanctions against Moscow. It comes as day four of the invasion of Ukraine has seen a reported 4,300 Russians and 210 Ukrainian civilians dead.

“So I order to move Russia’s deterrence forces to a special regime of duty.”

In a statement provided by the Russian TASS news agency, Mr Putin said: “Senior officials of the leading NATO countries also allow aggressive statements against our country, therefore I order the Minister of Defense and the Chief of the General Staff [of the Russian Armed Forces] to transfer the deterrence forces of the Russian army to a special mode of combat duty.”

It is not immediately clear what the “special mode of combat duty” entailed.

He then added: “Kremlin has no good off-ramps at this point and is looking at an existential threat to the current state.

“The thing to do at this point is for everyone, literally everyone – US, NATO, NWS, NAS, NNWS, TPNW – to say forcefully and clearly that a threat of nuclear weapons is absolutely unacceptable.

“ABSOLUTELY. No nuclear d***-waving, please. This might get serious.”

He said: “(Putin) tried cruise missiles. Nothing. He tried paratroopers and special forces. Nothing.

“He tried to send in his Chechens. Nothing. Now he’s waving the nuclear card because he knows it’s the last one he has left.”

On Thursday, on the first day of the Ukrainian invasion, the Russian President warned the West of “consequences greater than any faced in history” if anyone intervenes in the conflict.

He said: “Whoever tries to hinder us, or threaten our country or our people, should know that Russia’s response will be immediate and will lead you to consequences that you have never faced in your history.

“We are ready for any turn of events. All necessary decisions in this regard have been made. I hope that I will be heard.

“What is happening today does not come out of a desire to infringe on the interests of Ukraine and the Ukrainian people.

“It is related to the protection of Russia itself from those who took Ukraine hostage and are trying to use it against our country and its people.”