Volodymyr Saldo has reportedly been taken to the toxicological department of the Moscow Sklifasovsky Institute in a medical coma and remains in intensive care in “serious” condition. Mash news media wrote on Telegram that Saldo was diagnosed with poisoning by an “unknown substance”.

On Friday, the deputy head of the administration denied reports that Saldo had suffered a stroke and was in a coma.

In a statement on Telegram, Kirill Stremousov said the reports were “part of Ukraine’s information war against Russia”, although he confirmed that Saldo was ill and said he was “resting”.

An update from Russian state-affiliated media wrote: “Half an hour after Saldo ate, he experienced clouding of consciousness, then his fingers went numb.”

While another Russian media channel, Baza, wrote on Telegram: “The head of the provisional administration of the Kherson region, Vladimir Saldo, was placed in the intensive care unit of the toxicological department of the Research Institute. Sklifosofsky – the condition of the official remains difficult. 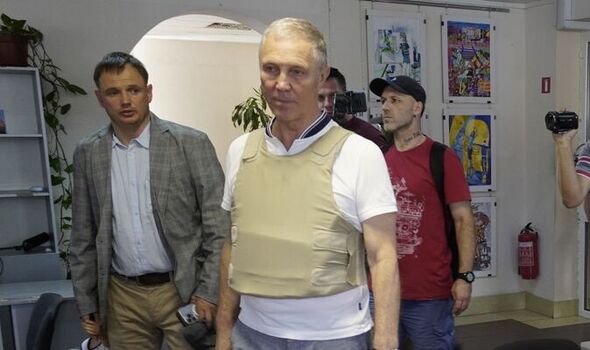 “Earlier, Baza already wrote that poisoning was the priority version: Crimean doctors almost immediately suspected it in Saldo when the head of the provisional administration was taken from the Kherson region to a hospital in Simferopol.”

The Russian state-run broadcaster RT had previously reported that Saldo, a former mayor of the city of Kherson who was appointed to head the region of the same name when Russian troops overran it in early March, was in a coma and on life support.

The region is part of a swathe of Ukraine that Russia has occupied, extending north and eastward from the annexed Crimean peninsula along the north shore of the Sea of Azov to the Russian border.

Ukraine has said it will conduct a counteroffensive in Kherson region and has been carrying out strikes on Russian supply lines and ammunition dumps in the area.

In June, a senior official in the Russian-backed administration was killed in a bomb blast for which his colleagues blamed Ukraine.

Moscow says it was forced to take control of parts of Ukraine to prevent persecution of Russian-speakers and defuse a Western threat to use Ukraine to threaten Russia’s security.

Kyiv and its Western allies say these are baseless pretexts for an imperial-style land grab.