It follows a decision by Russian premier Vladimir Putin for his forces to adopt their most aggressive military posture since the Cold War. Last night British military sources noted that a spike in Russian activities coincided with the pro-democracy protests in Belarus, raising concerns that Putin was attempting to distract the alliance ahead of offering military support to beleaguered ally Alexander Lukashenko following his re-election.

In the past six weeks British and other Nato forces have been harassed in the Baltic, with a marked step up of cyber attacks in Poland, Lithuania, Estonia and Latvia, where 14 Nato nations operate to defend Europe’s eastern borders.

Last month a joint UK, US, Swedish and Finnish counter-cyber operation was able to jam a Russian attack on strategic equipment for the first time.

A planned military exercise including Russian, Iranian and Chinese troops will next week heighten tensions further.

But Russia began to expand its foreign operations in November when it deployed an unprecedented number of submarines from its Northern Fleet. These include sea trials of its newest Yasen-class submarine, the Kazen, a 13,800 tonne nuclear boat, which will eventually carry 40 Kailbr-M cruise missiles.

And British and Nato submarines are still engaged in perilous cat and mouse operations with Russian counterparts in the Northern approaches – the Northern North Sea and Norwegian Sea. 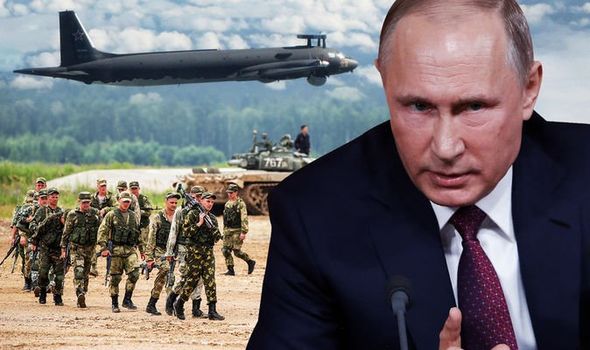 Russia’s Northern Fleet is so overextended that Moscow has sent out its oldest Typhoon-class submarine, Dmitry Donskoy, to Norway, according to recent satellite imagery. The 35,000-tonne Hunt for Red October boat, at least 40 years old, rarely deploys beyond the Barents Sea, where it used as a training vessel.

Russia’s Pacific Fleet recently underwent the largest naval exercise since the Cold War, with alarm bells ringing at the spotting of the guided-missile submarine Omsk in the Bering Sea off Alaska – a sign of Russia’s continuing Arctic ambitions.

The ninth RAF Quick Reaction Alert since January was triggered last week by Russian aircraft flying near British airspace, a figure not experienced since 2011.

Moscow has also daily continued to deploy strike aircraft across the Black Sea and into Ukraine to remind Kiev and Western forces assisting government troops of their capability.

And next week Operation Caucus 2020 will see 80,000 mainly Russian troops hold 4,800 drills and more than 9,000 practical combat training exercise in what Defence Minister Army General Sergei Shoigu described as “the most important event of the Russian Armed Forces’ combat training”.

Nato has responded with a series of coordinated counter-operations. Britain sent a Royal Navy type-23 frigate to the Arctic Circle with US warships for exercises in the Barents sea in May, the first time the Navy has ventured there since the Cold War.

This is being repeated with HMS Sutherland heading a Nato task force of US and Norwegian warships which last week sailed into the Arctic waters of the Barents Sea.

Aerial surveillance flights by Nato spy planes have increased by 30 percent, with 120 sorties over the Black Sea and Ukraine in August alone, compared with 80 last year.

These including an astonishing 20 missions by RAF Sentinel spy planes, as well as separate flights by RAF Typhoon flights, sending a clear message to Moscow that Nato is watching.

Last night a senior source at Permanent Joint Headquarters – Britain’s secret military headquarters in Middlesex, said: “A decision was taken to, to put it simply, keep Russian forces as busy as they’re keeping us. 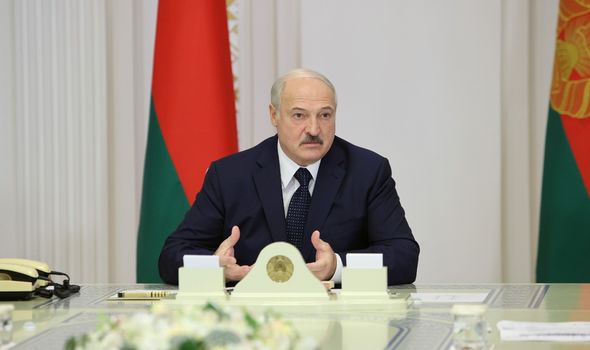 “What we’ve seen is a significant increase in Russian activity, based around an already aggressive posture, which has coincided with the domestic unrest in Belarus.

“In recent weeks they have stepped up a gear and appear to be trying to intimidate Western forces across air, land and sea domains from the North Sea to the Baltic States and the Ukraine.

“There is concern that Russia is mounting misinformation operations and keeping us otherwise busy as a form of distraction – pulling our attention and resources in one direction while they prepare to move into Belarus.”

Lukashenko recently ordered half the country’s army to enter combat preparedness and met with Putin for a mini-summit in the Black Sea resort of Sochi.

While stating publicly that he hoped the unrest in Belarus would be settled internally, Putin has offered Russian troops to prevent the country “spinning out of control.”

But Russia’s defence ministry admitted that 300 Pskov Guard paratroopers belonging to the 76th Russian Assault and Assault Division arrived for training in the Belarus city of Brest “to participate in the planned joint Belarusian-Russian tactical exercise Slavic Brotherhood-2020”.

Serbia, which was to have taken part, pulled out, Russia citing EU pressure for the decision.