The base of Russia’s elite Black Sea fleet in the occupied peninsula of Crimea came under attack from a drone this morning. Huge plumes of smoke were filmed rising from the city of Sevastopol, where Russia’s naval HQ is based. This prompted a colossal exodus of panicked residents from the city, as even Russian strongholds come under attack amid its stalled war with Ukraine.

According to reports, an explosion rocked Crimea on Saturday morning, with an unmanned aerial vehicle (UAV) striking the Black Sea Fleet’s HQ in Sevastopol.

The Russian-installed leader of the occupied-city Mikhail Razvozhaev confirmed a Ukrainian drone had been shot down over the area, and said no one was hurt, as Russian authorities sought to downplay the attack.

However, miles and miles of cars were spotted in queues leaving Sevastopol on the highway towards Yalta.

Nexta, which monitors the Russian-Ukrainian conflict, tweeted the video, adding: “Traffic jam on the exit from #Sevastopol to #Yalta, #Crimea.” 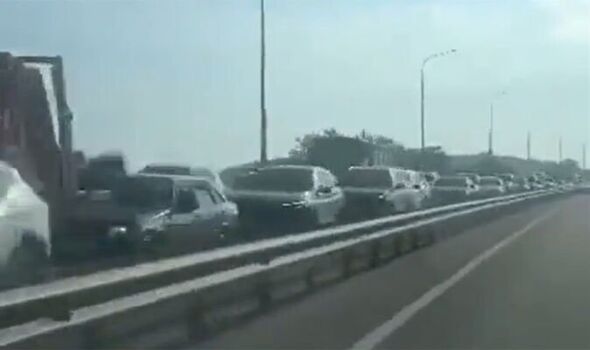 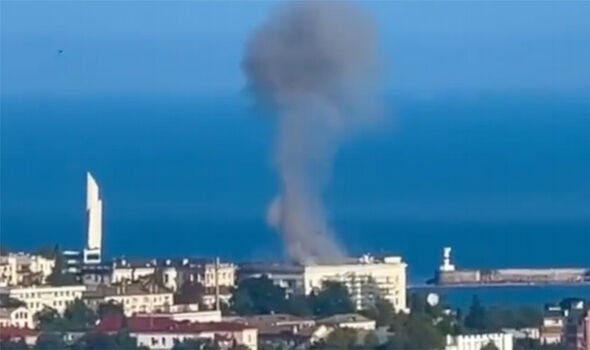 Jason Jay Smart, from Kyiv Independent, tweeted: “Following Ukraine’s successful attack today on the Russian Black Sea Fleet, located in Sevastopol, Crimea, you can tell by the traffic on the highway to Yalta, that locals have a hunch that Ukraine will be sending more ‘gifts’ to the occupiers, soon.”

Euan MacDonald, another Ukraine-based journalist from the New Voice of Ukraine, tweeted in response to the video: “Cutting short the holiday / Traffic jam out of Sevastapol in direction of Yalta to the east in Ukraine’s Russian-occupied Crimea.

“Russian visitors are leaving the peninsula in droves following suspected Ukrainian strikes on airbases and ammunition depots there.”

The exodus of people follows a recent series of attacks against Russian military targets in the peninsula, which Russia annexed from Ukraine in 2014. 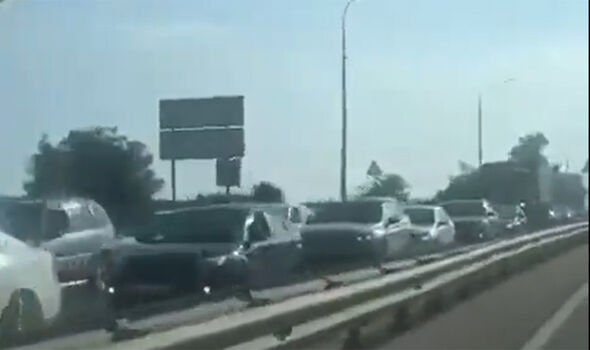 Last week, an attack on an airbase at Saky wiped out at least eight Russian jets, including Su-30s and Su-24s assigned to the Black Sea fleet for protection.

Ukraine has not commented on the reported attacks.

Western officials have claimed that these attacks behind enemy lines are having a major operational and psychological impact on Moscow’s forces. 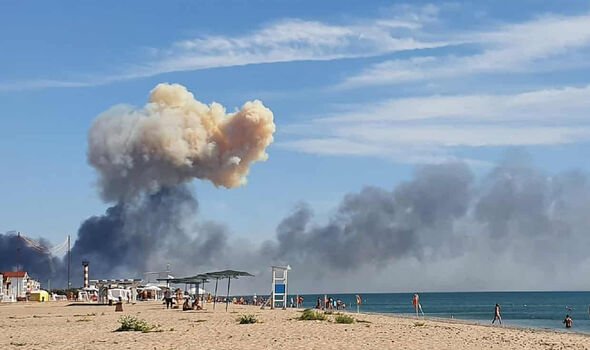 “The incidents have been having a material effect on Russia’s logistics support, but as importantly, there’s a significant psychological effect on the Russian leadership.”

The BBC’s Chris Partridge wrote that the attacks in Crimea “have been surprising – not least because it is one of the areas most heavily defended from air attacks.

“Moscow has blamed sabotage for some of the Crimea incidents, indicating some kind of special military operation perhaps by Ukrainian forces – or those loyal to Kyiv.”

Zelensky should be ready for smooth words and a betrayal – MADELEY
When will the war in Ukraine end?
Putin warned ‘launching nuke will be your death sentence’
Ukraine destroys FOUR Russian tanks and a radar system
Putin eyeing up Ukraine’s neighbour for next invasion, expert warns