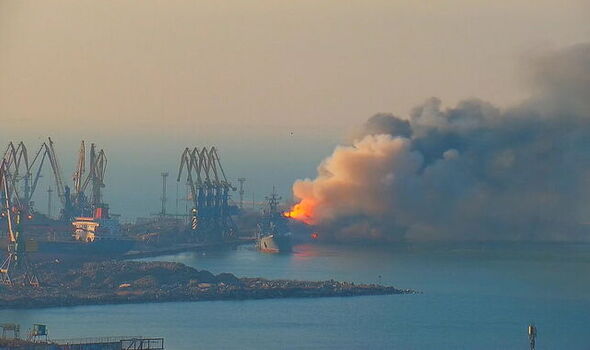 Kyiv said the Orsk had been hit and left to sink in the Sea of Azov early yesterday morning. In a post on Facebook, Ukraine’s navy said the landing vessel had been targeted in ongoing operations to repel the invaders.

“The Orsk large landing ship of the Black Sea Fleet of the occupiers has been destroyed in the port of Berdyansk captured by Russia,” the post read.

Ukrainian media reported that two other ships were also on fire and that an ammunition depot and a fuel warehouse were hit.

Kremlin forces captured Berdyansk weeks ago and have been using the port for refuelling. It lies between Crimea and the besieged city of Mariupol.

Just last week, Russian army TV hailed the arrival of the Orsk in Berdyansk as an “epic event” as it was the first Russian warship to dock there.

But video posted by the Ukrainian navy and on social media yesterday showed explosions and what appeared to be the Orsk on fire at the port at 7am.

Despite early advances, Vladimir Putin’s army has not been able to fight off resistance across Ukraine.

Such is the struggle that Russia yesterday started calling in emergency reserves to the Ukrainian border to help support its increasingly battle-weary troops following heavy losses. Kyiv claimed Russian forces were severely weakened, with Western officials warning that Moscow had made a “catastrophic miscalculation” when drawing up plans for the invasion.

As Ukranian President Volodymyr Zelensky called on the people of the world to take to the streets in protest at the Kremlin’s ongoing aggression, his forces were making progress in their courageous bid to fight off the invaders.

Ukraine military announced that nearly all of the city of Irpin – on the outskirts of the capital Kyiv – which has seen fierce fighting in recent weeks was now back in home control.

It also said Hostomel airport had been retaken by Ukrainian forces after being under Russian control.

The General Staff of the Armed Forces of Ukraine announced that “due to suffering numerous losses”, Russian forces “continue to form and move additional units of armed forces of the

Russian Federation to the Ukrainian borders”.

It claimed “contracting measures have been intensified” by military officials in Russia’s western Smolensk region.

It added: “Servicemen returning after a business trip from Syria are also being recruited to replenish the occupation units.”

The success of the Ukrainian forces was confirmed by British intelligence forces. The Ministry of Defence said there was a “realistic opportunity” that Ukrainian forces might be able to encircle Russian units in Bucha and Irpin.

The intelligence update added: “It is likely that successful counterattacks by Ukraine will disrupt the ability of Russian forces to reorganise and resume their own offensive towards Kyiv.”

Nato officials believe some 7,000 to 15,000 Russian troops may have been killed in the first month of the conflict, with the number of wounded perhaps between 30,000 and 40,000. Even in Kherson – the only large Ukrainian city captured by Russian forces – Mayor Igor Kolykhaev yesterday posted on his Facebook page to say a huge Ukrainian flag has been draped over the city council building.

He wrote: “On the night when the city council was fired, the rope on which our state flag was held was interrupted. Today we found the opportunity to hang a new one.” In his daily televised address, President Zelensky unusually spoke in English as he called on the world “to support freedom, to support life”.

Russia’s war was not just against Ukraine, he said, but the freedom of people everywhere. And the world needed to stop Russia’s crude use of force. He said: “Come from your offices, your homes, your schools and universities, come in the name of peace, come with Ukrainian symbols to support Ukraine, to support freedom, to support life.”

His address came hours before a Nato summit in Brussels where Western countries agreed to send reinforcements to Central and Eastern Europe to bolster the bloc’s defences.

US President Joe Biden attended the meeting on a day that marked one month since the Russian invasion began.

Putin’s forces getting increasingly bogged down in the bloody conflict, Russian forces continued to bombard and blockade the city of Mariupol yesterday.

With 100,000 people trapped without heating, food or water, drone footage revealed the true devastation in the southern port.

The recording showed smoking buildings, ruins and seemingly total destruction, with no one in sight.

The Russian bombardment also continued with more shells falling on cities including the capital Kyiv, Chernihiv and Kharkiv.

The UK has pledged to send a further 6,000 anti-tank missiles to Ukraine in a bid to help the nation defend itself.

According to the UN refugee agency, more than three and a half million people have fled Ukraine since start of the war a month ago, with most crossing the border into Poland.