Crimea: Russian Su-25 jet crashes after taking into the air

The Sukhoi Su-25 planes are known to fly in pairs together into the battlefield, but the clip showed one not making it very far. The video released by the official page of the Ministry of Defense Ukraine, showed two Russian Sub-25 planes taking off together, before one nose dives and crashes into the ground just moments later. The video clip has also caused more speculation about the quality of Russian weapons, as reports from the West have been claiming for many months that Russian forces are working with outdated systems.

The video shows two Russian Su-25s taking off in a field in Ukraine side by side as they begin to fly up higher into the sky.

The planes can be seen tilting on their sides as they pick up speed but thick black smoke begins bellowing out of the back of the exhausts of the planes.

One plane continues to follow course, as the second one dips down lower into the sky and takes an alternative course for just a few short seconds before nose-diving straight into the ground.

A ball of flames erupts and engulfs the military Sub-25, the smoke continues to rise and forms a mushroom-shaped cloud over the destroyed vehicle.

The Ukrainian Defence Ministry commented: “Sunday morning in Crimea. Another Su-25 is down.

“Incompetence at all levels. Weapons in the hands of Russians are the danger, first of all, to themselves.”

JUST IN: ‘Got to come together’: Kate’s sweet words as Prince William and Harry reunited 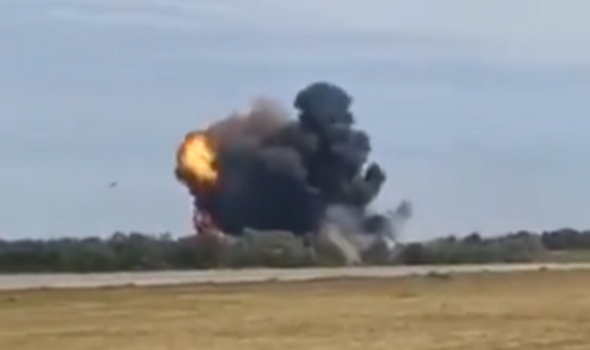 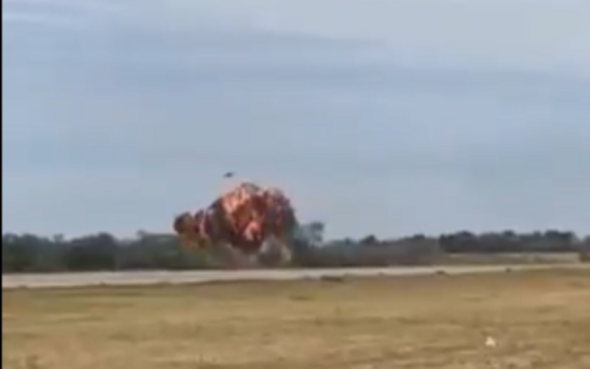 Users on Twitter have been reacting to the video released by the Official page of the Ministry of Defense of Ukraine.

One user @CharlesBrec said: “Looks like left engine failure and loss of control due to low-speed turn, I see smoke from the left engine at 0:14 sec.”

@AnOldWombat said: “A flame out is almost certainly caused by Jet Wash by the lead craft. This is why when taking off like this initially both planes bank left and right to avoid wash.”

@RGranbakk said: “Could be lots of things, but many of those jets are over 47 years old, and probably full of stress cracks and other malfunctions. Just look at some of the navy ships of Russia, rusty bathtubs.”

@BaylessGreg said: “That’s brutal. You can’t go that slow and take your wings perpendicular without falling like a stone. 100% pilot error.”

READMORE: Russian soldiers ‘literally running’ for their lives as the chain of command collapses

@BlueBizNW said: “This is what happens when you don’t put your phone in Airplane Mode.”

@GuyBarwood said: “Everything started to go wrong for that trail aircraft when it started to climb a bit and the pilot attempted to compensate by pushing the nose down. Now it’s very low and descending, now the pilot tries to pull up and bank at low speed, over banks, likely stalling the wing. Boom.”

@WendyReedTweet said: “The ruzzists are a bunch of idiots. It would be funny if it was not so tragic.”

@TracieKnits said: “Nah, it’s hilarious. They were probably on their way to bomb civilian infrastructure or commit war crimes.” 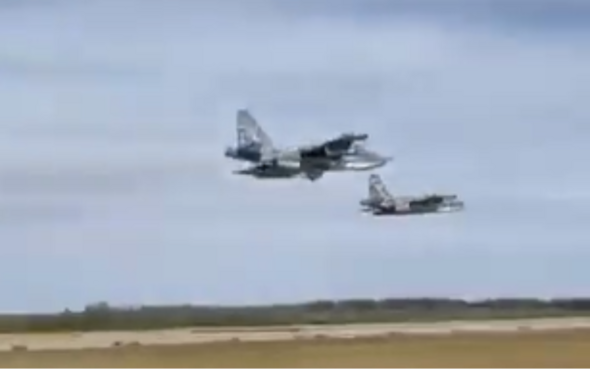 The £9 million military crafts have been reported to of been shot down previously by Ukrainian forces.

A statement by the Ukrainian Air Forces on the destruction of another Su-25 stated: “The Russian aircraft operated in pairs, attacking the positions of the Ukrainian defenders.

“After entering the defence zone, one of the hostile aircraft changed course, while the other pilots decided to try their share.

“The aircraft fell on the occupied territory. Whether the pilots survived the crash is to be clarified.”

In order for Ukraine’s military to continue to destroy Russian forces, Western countries have been supplying them with top-of-the-range weapons and training.