Saudi Arabia has ended its two-and-a-half year blockade of Qatar with a hug between the two country’s leaders at a regional summit.

Saudi Arabia, Bahrain, the UAE and Egypt cut transport and trade links with Qatar in 2017, accusing it of ties with Iran and Islamist extremists.

As tensions eased in one part of the gulf they have escalated elsewhere after Iran seized a South Korean oil tanker.

Protagonists in the two separate events will have had their eyes on the same thing, the arrival of a new administration in Washington. 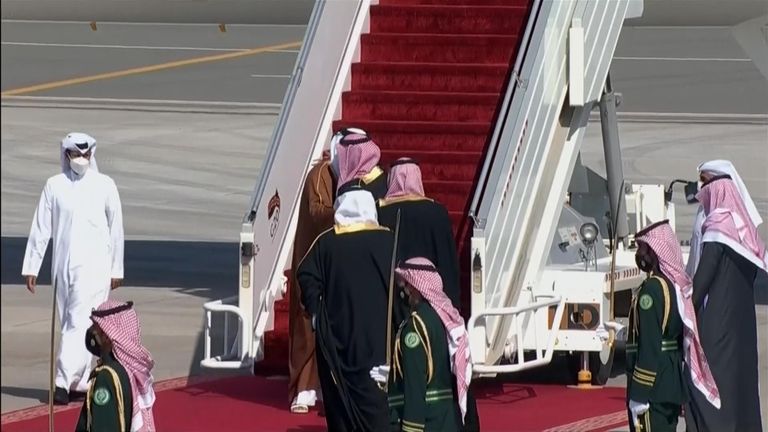 The Saudi-Qatari rapprochement is a breakthrough in US-led diplomatic efforts to resolve the long-standing spat.

The deal to reopen borders will be signed in the presence of President Donald Trump’s son-in-law and adviser, Jared Kushner who helped broker it.

Mr Kushner and US diplomats have been keen to push a united front against Iran among allies in the region. The threat of Iran helped him encourage a normalisation in relations between Israel, the UAE and Bahrain – another significant diplomatic achievement for the Trump presidency.

But the Saudis will also have been motivated by the looming change of management in Washington.

Their de-facto ruler and crown prince, Mohammed bin Salman, knows incoming president Joe Biden is likely to take a harder line with the kingdom over human rights and the murder of journalist Jamal Khashoggi and not offer the same unquestioning support they have enjoyed under his predecessor.

The Saudis will be hoping their détente with Qatar may help lubricate easier relations with the new Biden administration.

The significance and wisdom of Mr Kushner’s other achievement in the region is also debated. Critics say the deal normalising relations between gulf countries and Israel saw America give too much away, in a particular state of the art F35 fighter jets.

Democrat senators who attempted to block their sale say their technology is too advanced to be shared and fear it could start a regional arms race.

On the other hand, supporters say the agreement is a major shift towards peace in the region and shows that creative diplomacy can lead to progress. The agreement, they say, proved wrong the maxim that peace in the Middle East can only come once it is agreed between Israel and the Palestinians.

The US could probably not have brokered the deal without the perceived threat of Iran overshadowing Israel and its new Gulf Arab partners.

The Trump administration abandoned Barack Obama’s more even-handed approach to the region that led to the nuclear arms deal with Iran and aimed to keep its rival countries in check and balance.

Mr Trump abandoned the Iran nuclear deal and sided with Sunni Gulf states and Israel against their Shia rival. His supporters say his policy of maximum pressure has yielded results. Critics say Iran is now closer to building the bomb than before and more meddlesome than ever.

As if to prove the point, Iran has just begun enriching uranium to 20% purity – its biggest breach of the 2015 nuclear deal yet. And it has seized the South Korean tanker. It claims to be investigating pollution from the vessel.

The Iranians know President Biden will try to revive the nuclear deal. These latest moves may be an effort to increase their leverage ahead of negotiations.