More than 100 officers with body armour, nightsticks, helmets and weapons swept into the ‘CHOP’ area early on Wednesday. 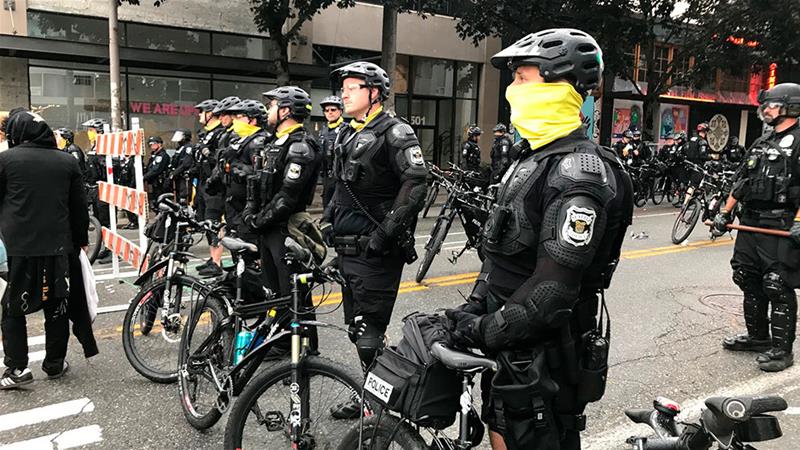 Heavily equipped police in Seattle, Washington converged on the city’s “occupied” protest zone in tactical vehicles early on Wednesday after Mayor Jenny Durkan issued an executive order for protesters to vacate the area.

People have occupied several blocks around a park and the Seattle Police Department’s East Precinct for about two weeks after police abandoned the building following standoffs and clashes with protesters calling for racial justice and an end to police brutality.

Police said the move on Wednesday was designed to protect the public. Protesters in the Capitol Hill neighbourhood where the zone is located responded with chants and calls to leave them alone.

BREAKING – Seattle’s CHOP/CHAZ has been dismantled in just under an hour by the police with little or no resistance.pic.twitter.com/2EExBLoNMX

“Since demonstrations at the East Precinct area began on June 8th, two teenagers have been killed and three people have been seriously wounded in late-night shootings,” Seattle police said on Twitter. “Police have also documented robberies, assaults, and other violent crimes.

In a news conference on Wednesday morning, Seattle Police Chief Carmen Best said she and others in city government support the message of police reform championed by protesters in the zone but not their physical presence in an area that she said had become “lawless and brutal”.

“I too want to support meaningful change,” she said, “but enough is enough”.

More than 100 police officers equipped with body armour, nightsticks, helmets and weapons moved into the area. “Anyone who remains in the area, or returns to the area, is subject to arrest,” the department tweeted.

Police officials said at least a dozen people had been arrested in the sweep by 5:30am local time.

Some of the violence in and armed individuals in the CHOP have been captured by open source video recorded in the area: https://t.co/PCTaMtqntr

Cement barricades that remained in front of the Seattle Police Department East Precinct building on Tuesday were fortified by protesters with chunks of concrete and tarps.

There have been increasing calls by critics, including President Donald Trump, to remove protesters from the “Capitol Hill Occupied Protest” area east of downtown following the fatal shooting on Monday of a 16-year-old boy and the June 20 killing of a 19-year-old man.

Protesters say they should not be blamed for the violence in the area. People continued to add artwork, flowers and candles at a memorial for the 16-year-old on Tuesday.

Best has said the shootings are obscuring the message of racial justice promoted by protesters.