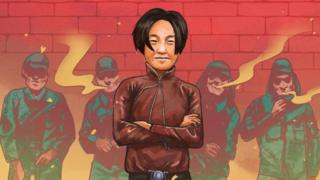 Some are legendary, others little remembered, but all eight of the women we profile here played a key role in the years surrounding World War Two.

As the world marks 75 years since surrender of Nazi Germany, these are the stories of women such as the spy princess, the White Mouse and Soviet sniper Lady Death.

In a precursor to World War Two, Japan invaded China in 1937 and Cheng Benhua led a local resistance movement.

She was captured and imprisoned and a picture of her taken by a Japanese photographer shortly before she was bayoneted in 1938 has become an image of fearless defiance.

She had been gang-raped by her captors but appeared to smile in the face of death: her arms folded across her chest, her head raised to the lens.

Her pose is commemorated by a five-metre statue in Nanjing, itself the site of one of the worst massacres of the war, when up to 300,000 Chinese men, women and children were butchered by Japanese troops.

An Indian princess and a British spy, Noor Inayat Khan was a direct descendant of Tipu Sultan, the 18th Century Muslim ruler of Mysore.

Born in Moscow, the daughter of an Indian father and an American mother, she studied in Paris and her language skills landed her a place in the fabled, undercover British Special Operations Executive (SOE).

SOE agents parachuted into occupied France during the war to disrupt Nazi activities with sabotage, liaise with the French resistance and spy on troop movements.

Inayat Khan worked as a radio operator, constantly changing location, but she was captured by the Nazi Gestapo, interrogated and tortured.

She tried to escape several times and each time she was caught her detention became more severe. It’s thought she gave no information of value to the Germans, who only knew her by her codename Madeleine and did not know she was Indian.

She and three other SOE women agents were shot dead at Dachau concentration camp on 13 September 1944. A monument to her bravery was erected in Gordon Square Gardens in London.

“Noor Inayat Khan continues to inspire even today, not just for her exemplary bravery, but the principles she stood for,” biographer Shrabani Basu told the BBC.

Lyudmila Pavlichenko is one of the most deadly snipers in history, with 309 confirmed kills of German soldiers following the Nazi invasion of the Soviet Union in 1941.

Dozens of her victims were enemy snipers, targeted by a woman who earned the sobriquet Lady Death for her actions during the sieges of Sevastapol and Odessa.

She was eventually wounded by a mortar round and withdrawn from the front line, becoming a poster girl for the Red Army.

She travelled the world, meeting US President Franklin D. Roosevelt, but this decorated Soviet hero was later largely edited out of history.

“The Soviet narrative about World War Two was centred on the image of a brave soldier, a man,” gender equality activist Iryna Slavinska told the BBC. “Women were not part of that narrative.”

Nancy Wake had a reputation as a deadly fighter and a relentless drinker. Born in New Zealand, she grew up in Australia and ran away from school at the age of 16 and later got a job in France as a journalist.

She married industrialist Henri Fiocca and was living in Marseille when the Germans invaded France.

Wake joined the resistance and guided escaping allied airmen over the Pyrenees to safety in Spain. When her network was betrayed to the Germans in 1942, she fled to Britain via Spain.

Her husband was captured, tortured and executed by the Nazis. Wake parachuted back into France, working for the British Special Operations Executive.

In a TV interview in the 1990s she described killing a German sentry. “They’d taught this judo-chop stuff at SOE, and I practised away at it. But this was the only time I used it.”

After allied radio codes were lost in combat, she volunteered to cycle long distances across enemy territory to get replacements.

She would dress up and go on dates with German soldiers to get information. “A little powder and a little drink on the way, and I’d pass their posts and wink and say, ‘Do you want to search me?’ God, what a flirtatious little bastard I was,” she told the Australian newspaper.

Her evasive ability led the Germans to call her the White Mouse. She died in August 2011, aged 98, in London.

Jane Vialle was born in the Republic of the Congo but moved to Paris as a child and was working as a journalist when war broke out.

She became a secret agent for the French resistance in the south, then ruled by the puppet Vichy regime.

She gathered intelligence on Nazi troop movements which she then forwarded to the allies.

The enemy caught her in January 1943 and she was charged with treason.

Her secrets were safe from the authorities though, as she had coded her data so well it was undecipherable.

Vialle was sent first to a concentration camp and then a women’s prison in Marseille. She was elected to the French Senate in 1947.

The Austrian-born film star achieved fame in Hollywood and had six husbands. But it was not her glittering film career that marks her out as a war hero.

Born Hedwig Eva Maria Kiesler to a Jewish family in Vienna, she first married an arms-dealing industrialist who frowned upon her nascent acting career and obliged her to play hostess to his friends and colleagues, who included Nazis.

Lamarr fled first to Paris and then London, where she met the legendary head of MGM Studios, Louis B. Mayer.

She was promoted as “the world’s most beautiful woman” and starred in more than 30 films. But what gains her a place on this list was her sideline as an inventor.

Lamarr developed a guidance system for allied torpedoes that could counter the threat of jamming by the enemy by switching frequencies.

The US Navy didn’t pick up on her patent, but elements of her pioneering inventions can be seen in today’s Bluetooth and WiFi technology.

Mya Yi: With sword and poison

She was a vigorous campaigner for the country’s independence, opposing the British colonial authorities.

She joined resistance forces in World War Two and always brought a sword and a poison bottle to defend herself.

In 1944 she travelled on foot across enemy-held territory and mountain ranges to British-controlled India to continue the fight against the Japanese.

She bandaged her wounds with strips of sarong as she went, and refused men’s offers to carry her.

In India, she contributed to pamphlets dropped over Burma detailing how badly the Japanese were treating the population.

Though she planned to return to Burma with her husband after the birth of her first son she only returned in October 1945, after the war had ended.

She carried on her fight for independence and then against the country’s military regimes.

Rasuna Said is an exception on this list, as during the war she sided with the axis forces, at least nominally.

She was a key figure in Indonesia’s struggle for independence, and for her the enemy was Indonesia’s Dutch colonisers.

Said became politically active at a very young age, and founded a political party – the Indonesian Muslim Association (PERMI) – in her early twenties.

A firebrand speaker whose speeches came “like lightning during the day” according to one biography, her challenge to Dutch colonial authorities earned her the nickname Lioness.

The Dutch frequently halted her speeches, and at one event imprisoned her for 14 months.

When the Japanese invaded the archipelago in 1942, Said joined a pro-Japanese organisation, but used it to continue her independence activities.

After the Japanese were defeated, the Dutch returned to try to reimpose their authority, at first with British help, and a brutal four-year conflict began.

In 1949 the Dutch recognised Indonesian sovereignty in 1949, and Rasuna Said’s name is remembered on one of the main streets in the capital Jakarta.