At the holidays, recipes that are simple on their own become more difficult when you try to juggle them all in a single kitchen. To make things less complicated, I’m taking a novel approach with my potatoes this year, one that requires only a bit of prep work, and a few minutes of attention at dinner time: I’m stir-frying them in my wok.

Several years ago, when walking through the bustling Muslim quarter of Xi’an, in the Shaanxi Province of China, my wife, Adri, and I were surprised to see carts with wide, flat aluminum pans filled with tiny golden potatoes bubbling away in oil, just as they’re cooked in Adri’s native Colombia. There, yellow papas criollas, grown high in the Andes and no bigger than grapes, are often served shallow-fried whole until their skins are wrinkled and their flesh is so tender that they virtually pop as you eat them.

(I later reached out to the British chef and writer Fuchsia Dunlop, who trained in China. She identified the potatoes as gaoshan tudou, or “high mountain potatoes,” grown in the Qinling Mountains, just south of Xi’an. Given the potatoes’ comparable alpine growing conditions, their similarity to Andean papas criollas made sense.)

In Colombia, the potatoes would be sprinkled with salt and served with ají, a fresh salsa made with chiles and cilantro. In Xi’an, it was a little different. We ordered and watched as the vendor scooped up some of the fried potatoes and placed them in a hot wok, rapidly added spices and aromatics, and stir-fried everything for a moment, before transferring them to a cup and handing them over with a couple of toothpicks.

The potatoes were remarkable — as moist and buttery as papas criollas, with the complex warm spices of Xi’an: chile, garlic, Sichuan and white pepper, star anise, cumin, fennel and something that gave it all a distinct umami. 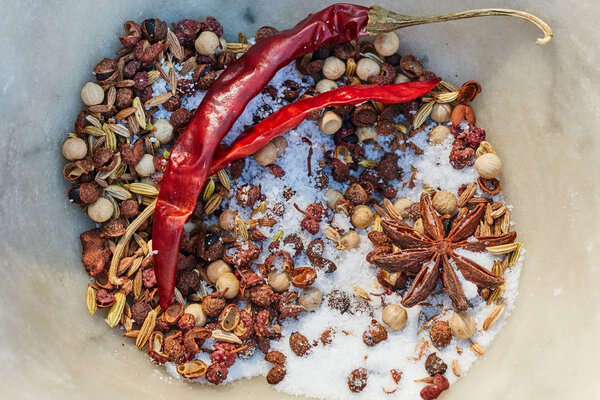 The idea of briefly stir-frying precooked potatoes was immediately appealing to me, and, when we got back home, I started experimenting.

To simplify things, I wanted to see if I could do away with the initial shallow fry. I found success boiling yellow new potatoes, draining them and letting them steam-dry before stir-frying them. Extending the stir-fry step to a few minutes (rather than the 30 seconds the vendors in Xi’an gave them) delivered potatoes with delightfully brown and crispy bits on their surfaces. Even better: You could boil the potatoes earlier in the day, let them sit at room temperature, then stir-fry them for a few minutes just before serving without any loss in quality.

The method is also highly adaptable, in terms of flavor. The potatoes are good with just salt and pepper, but some minced fresh rosemary and chopped garlic puts them at home on a traditional Thanksgiving table. At my restaurant, we make a spice blend with blistered cumin and mustard seed that we sprinkle over our currywurst. Those flavors are wonderful with stir-fried potatoes, especially when you add a handful of chopped fresh cilantro.

Eager to identify that umami flavor I tasted in Xi’an, I reached out to my friends Steph Li and Chris Thomas, who produce the YouTube channel Chinese Cooking Demystified out of their home in Shunde. They pinned down the mystery powders as a particular brand of Chinese chicken bouillon and a seasoning blend that contains monosodium glutamate (MSG) and disodium 5’-ribonucleotides. The latter is a mixture of organic compounds that work synergistically with MSG, increasing its umami flavor by around fourfold. It’s a common ingredient in Western chicken bouillon (and snack food).

The Xi’an-inspired spiced potatoes are delicious, even without added chicken bouillon, but adding a touch bolsters their flavor considerably. I keep a small jar of MSG on my countertop right next to the salt cellar and the pepper mill (just as my mother and grandmother did). I may start keeping a jar of powdered bouillon on my counter as well; stir-fried potatoes make the holidays easier, but they’re also delicious any time of year.