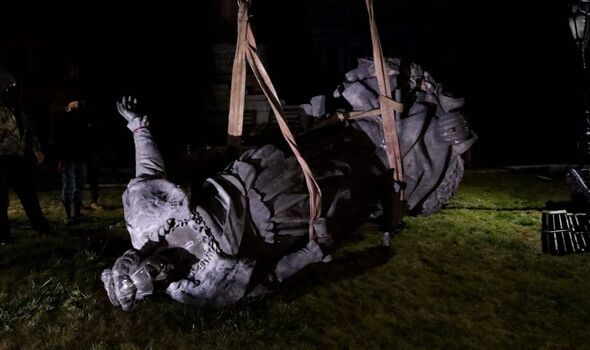 A monument to Catherine the Great has been ripped down in Odesa, following a decision to destroy symbols celebrating centuries of Russian rule. The large statue of the 18th Century Russian empress was removed from its pedestal with a hoist as crowds looked on.

Utility workers also removed statues of the Empress’ four consorts standing around the pedestal at her feet.

A Ukrainian flag was raised over the empty base of the bust on Thursday morning, while the statue of the empress and her consorts were lain on their backs in front of a local history museum.

The original monument was put up at the turn of the 19th century to mark the centennial founding of the city, but was dismantled and later destroyed by the Bolsheviks.

A new statue was put in place in 2007. It was nicknamed “Big Kate” by locals.

Calls to take the monument down had emerged in Odesa shortly after the annexation of Crimea by Russia in 2014.

However, local authorities and resident appeared to be against the proposal at the time.

The dismantling of the monument reveals a dramatic change in Ukrainians’ views of Russia since the start of the invasion in February.

The catastrophe brought about as a result of Russia’s decision to invade has urged Ukrainians to re-think their attitudes towards Russia.

Gennadiy Trukhanov, the mayor of Odesa who was once criticised for his pro-Russian views, issued a decree in November authorising the removal of the monument after the local parliament overwhelmingly voted to get rid of it.

“The mood against our enemy has definitely hardened our people,” Mr Trukhanov told local television before the vote when he was challenged on his previous remarks defending the statue.

“When our people, troops and civilians are getting killed – this triggers hatred and indignation.”

The statue had been vandalised on several occasions this year, with unknown attackers smearing it with red paint.

Someone also spray-painted: “Catherine = Putin” on the base of the statue.

In October, Vladimir Putin, the Russian president, suggested that removing the monument would be too radical even for those he called “neo-Nazis” and said it serves as a reminder that Odesa belongs to Russia.