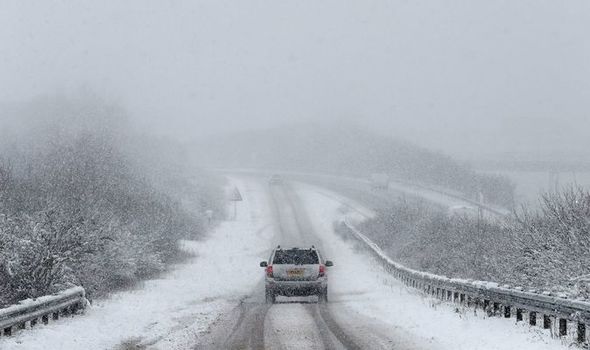 Winds gusting at 70mph were expected, as well as snow and heavy rain. Forecasters urged householders to take precautions and they issued yellow-level wind warnings for England, Wales and Northern Ireland with Barra charging in from the Atlantic.

The gales follow in the wake of 98mph Storm Arwen that battered Britain nearly two weeks ago.

Around 1,300 homes in the North of England were still without power last night. Stewart Sexton, of Alnwick, Northumberland, said he was exhausted by waiting for engineers to reconnect his house: “It’s wearing us down, it’s a constant worry. Every day seems to bring a new problem.”

Stewart, 57, revealed his floodhit house had no heating so he’d tried to shower with water heated on a wood-burning stove. He also travelled 12 miles to his sister’s home for some respite. He added: “We have not got any hope at all. It’s awful, it’s the futility of it.”

Anna Elson, 49, also of Alnwick, was moving to a relative’s with her 13-year-old son yesterday to avoid an 11th night without heating. She said: “The village was left to cope on its own for too long.There are a few medically vulnerable residents here, including me.”

More than 240,000 homes lost power when Arwen brought down trees and transmission lines.

Bosses at electricity distributor Northern Powergrid said they “remained hopeful” that the final repairs would be completed today.

Paul Bircham, of network operator Electricity NorthWest, said the only properties in Cumbria still without power were empty holiday homes.

Rain will turn to up to 2in of snow in parts of northern England and Scotland, triggering fears of road and rail disruption.

Relatives of Fiesta passenger Lana Maddison, 19, who was fatally injured when the car hit a tree in Keswick, Cumbria, during Arwen’s gales have said they were “absolutely devastated at the loss of our beautiful daughter”.