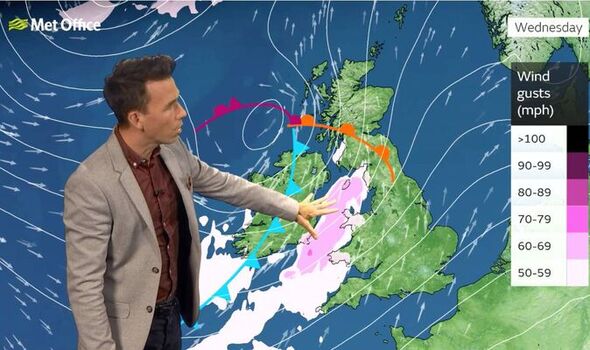 Government meteorologists issued wind warnings across southern Britain earlier today with another alert in force on Wednesday across western fringes. Turbulent weather will be boosted by a ‘flattened’ jet stream charging across Britain loaded with cyclonic low-pressure systems.

Met Office meteorologist Aidan McGivern said: “The jet stream will be flatter pointing at us from the west.

“The wind stays strong on Tuesday, and we are likely to see gales across exposed southern and southwestern coasts–70mph wind gusts are possible as people start waking up on Tuesday morning, and further spells of rain and showers will come through the southern part of the UK.

“Those showers will be heavy and persistent and thundery in places.”

Another storm system waiting in the wings will barrel in from the Atlantic on Tuesday night, he warned.

He said: “The next system starts to emerge in the mid-Atlantic, and the jet stream, powered across the Atlantic, will pick up this weather system and deepen it as it moves across the UK.

“We could see wind gusts of 55mph to 65mph around exposed Irish Sea coasts.

“The rain will be heavy and persistent. It’s going to be mounting up during the week across western hills in particular.”

Cold fronts swept in from the Atlantic will clash with warm air over Britain to drive the unsettled weather, forecasters say.

Energy left in the atmosphere, the ground and surrounding sea waters will give an extra charge to the autumnal assault.

Jim Dale, meteorologist for British Weather Services, said: “There is a breakdown in the settled weather looking possible at the start of November, and this will be one to watch as it could come with some venom.

“We also have a lot of energy still in the atmosphere, and the ocean temperatures are still above average after the very hot summer.”

Temperatures will be mild for the time of year, although they will dip towards average by the weekend.

However, long-range forecasters say thermometers will hover above average until around mid-month.

Netweather spokesman Paul Michaelwaite said: “The mild and changeable weather pattern with a strong trough in the eastern North Atlantic looks set to continue during [the second week of November].

“Periods of persistent rain are especially likely in western Scotland.

“Temperatures look set to stay well above average, especially early in the week and especially in eastern England.”

Britons making plans in the run up to Bonfire night are warned the next five days look wet and windy.

James Madden, forecaster for Exacta Weather, said: “The period between Halloween and in and Bonfire Night is looking stormy.

“We now expect to see a rise in the risk of unsettled weather due to low pressure dominating the weather over the next few days.”

A Met Office alert for wind on Wednesday warns of 65mph gusts in parts of the country.

Deputy Chief meteorologist Steven Keates said: “Within the warning area, gusts are expected of between 55 and 65mph.

“This is associated with low pressure moving towards the northwest of the UK, which is bringing with it some heavy rain on Wednesday.

“In addition to high winds in the warning area, many parts of the UK will experience strong and gusty winds, at least for a time, during Wednesday.”