Suez Canal: Ever Given on the move after being refloated

The Suez Canal is back open for traffic after almost an entire week, as the Ever Given cargo ship was finally released from its trapped position. The container ship was lodged into the canal’s bank on Tuesday last week (March 23), and stretched across the entire width of the trade route.

The Ever Given was stranded after a sudden sandstorm and prevailing winds pushed it off course.

The boat tried to correct itself, before ending up crashing into the canal’s banks and subsequently becoming trapped.

Rescue crews had been trying to free the ship for six full days, but were struggling due to its huge length and weight.

The Ever Given is 400m long, which is the equivalent to the height of the Empire State Building. 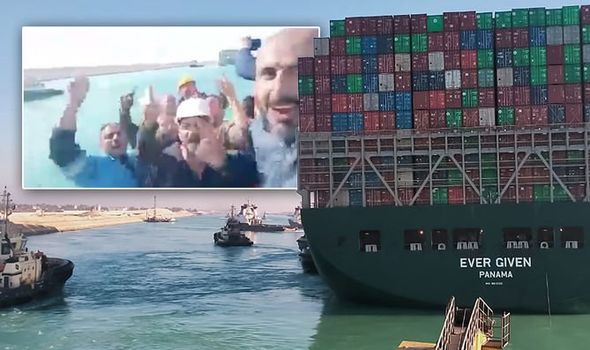 But the rescue mission was officially a success on Monday afternoon (March 29), after the ship was freed from its stranded position.

A flotilla of 13 tugboats were needed to dislodge the Ever Given, while dredgers dug 30,000 cubic metres of mud and sand from beneath the ship.

As the Ever Given was freed, rescue mission crews and locals celebrated jubilantly, as global trade was allowed to continue once again.

A video of the celebrations has since gone viral on social media, showing the ‘Mashour’ tugboat team chanting with beaming smiles on their faces.

DON’T MISS
Does the Suez canal have locks? How much does it cost to go through? [ANALYSIS]
Is the Suez Canal open? Ever Given ship is FREE after 6 days of chaos [NEWS]
Suez Canal latest: Monster traffic jam of cargo ships seep from space [PHOTOS]

The video, published to Twitter by keynote speaker Anas Alhajji, showed the Suez Canal scenes immediately after the boat was freed.

Alhajji wrote: “The Egyptian Team of the Tug boat ‘Mashhour’ (pronounced mash-hoor) celebrates the success of freeing the #EverGiven After it got stuck in the Suez Canal.

“They are chanting: ‘Mashhour is number 1’.”

More than a million people have watched the video within a 15-hour period, sparking an outpouring of congratulatory messages from members of the public. 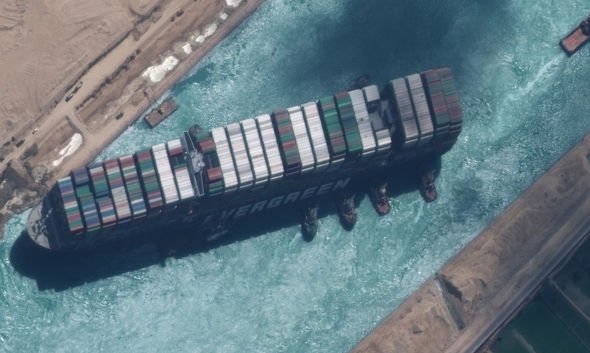 One Twitter user wrote: “I hope they make a documentary of this entire saga! They deserve some serious praise!”

Another said: “Look at those wacky happy faces, I hope someone buys them a hecking good dinner and a week off with pay for this. Well done folks well done.”

One tweet read: “Congratulations, and you guys did amazing job,” while another said: “They should be proud. World owes them a debt.”

A member of the public also replied: “Congratulations to all workers of every nation involved in this enormous undertaking! You have successfully moved not just a gigantic ship, but all our goods and services too. Thank You and Safe Travels.”

On this occasion, 13 tugboats were needed to move the Ever Given, which weighed a massive 200,000 tonnes.

High tides helped the tugboats and dredgers to carry out their mission, and the rear end of the ship was freed first.

Just a few hours later, the front of the Ever Given was released from the canal’s bank, allowing the ship to continue on its voyage.