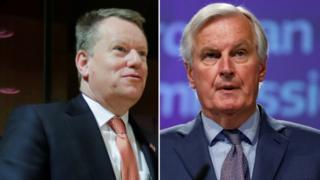 Despite the fear, the misery and the suffocating uncertainty of Covid-19, by now you’ve no doubt heard on the Brussels-Paris-Berlin-Dublin-Belfast-London grapevine: the post-Brexit trade talks between the EU and the UK are in trouble.

Sure, there’s agreement in basic free trade discussions but clashes on key issues remain. On Tuesday, Ireland’s Foreign Minister Simon Coveney said the two sides looked like they were heading for a crisis which, from the Irish perspective, was “very, very serious”.

So, should we be concerned?

Ok, I’m being intentionally provocative. I’m hoping you’ll peruse this blog on Brexit even though you’re drowning in must-reads on coronavirus. But I certainly don’t mean to be flippant.

The fact is: a crisis was always predicted in EU-UK trade talks. They are multi-layered and complicated. The first time ever in trade negotiations that two parties are focused on loosening the ties that bind them (now the UK is no longer an EU member state) rather than creating new and closer bonds.

What the two sides want

The UK seeks more than a basic economic relationship with the EU, whatever impression some UK politicians may seek to give.

For example, the UK government hopes to continue to benefit from EU-wide data sharing arrangements. It wants access to the central intelligence database of the EU’s law enforcement agency Europol. Germany is not at all keen on that idea. It says once you’ve left the club, forget the perks. You can’t have your cake and eat it.

The two sides want to work together in research and development, transport, chemical waste, law enforcement and judicial co-operation. Then there’s the contentious issue of fish: to what extent EU fishermen will be allowed access UK waters.

Here, the UK turns the tables and accuses Brussels of trying the cake-and-eating-it routine. The EU wants to keep the same fishing quotas as when the UK was a member state. And if there’s no agreement on fishing, the EU threatens, there’ll be no trade deal at all..

You get the picture.

The EU is also deeply concerned about possible unfair competition. UK businesses know the EU market well and have great contacts after more than 40 years of membership.

Brussels worries that if the UK slashes regulations such as labour, state aid and/or environmental rules in the future, then that will give UK businesses an advantage over European ones in their own single market. So, the EU wants a commitment from the UK to keep in line with its competition regulations long after Brexit. Something the UK says as a sovereign country it cannot and will not do.

It points out the EU did not impose similar demands on Canada in their zero-tariff, zero-quota trade deal.

The EU response: Canada doesn’t have zero tariffs, zero quotas in all areas such as agriculture. UK farmers presumably wouldn’t be thrilled, says Brussels, if they were left out in the cold.

The next round of EU-UK negotiations takes place next week. But don’t hold your breath.

Political intervention is needed on both sides in order to find compromise. But political leaders have more than their hands full with coronavirus at the moment.

There’s also a suspicion in Brussels that the UK is dragging it feet. “Selectively negotiating,” as one influential EU figure put it to me: in other words refusing to engage in areas where it doesn’t want to compromise, such as fishing and competition regulations.

The assumed UK hope is that, later in the year, with time running out and Brussels anxious to avoid a no deal situation, the EU will give in, give up and compromise far more than it had intended to.

The UK’s chief negotiator David Frost denies the UK is doing anything other than negotiating in good faith.

It is great news that we have today begun a second major free trade negotiation, this time with the US. Good luck @trussliz in getting a great deal that deepens still further the incredibly rich economic relationship we already have with 🇺🇸. @ustraderep @tradegovuk https://t.co/KscPRy6xvj

But even if the UK were banking on brinkmanship in the autumn, EU diplomats describe that to me as a risky strategy. Germany, for one, believes there could well be a second wave of coronavirus deaths and infection come the colder months. If so, then a UK trade deal will certainly not be foremost in EU minds.

Is there enough time?

Which brings us back to whether we should be concerned right now.

There’s still time for agreement. If both sides accept that far from the “ambitious, close and deep future relationship” once discussed, the EU-UK deal agreed by this year’s end would be a pretty thin one. And, crucially, both sides have to be open to compromise.

The European Union’s chief negotiator Michel Barnier has just told EU countries to at least start thinking about what wiggle room they’d find acceptable, as well as demanding the UK to walk away from some of its red lines.

Taking stock of EU-UK negotiations today with the 27 Ambassadors🇪🇺

The EU remains calm and united in our positions. Progress on all issues in parallel is required in order to build a new, ambitious partnership with the UK.

On Tuesday, UK government minister Michael Gove floated the idea of the UK accepting it couldn’t have a fully tariff and quota-free trade deal, if that’s what it would take to avoid EU insistence on marrying up competition.

Though this begs the question which sector the government would choose to bar from such a big market? It would have to be significant to be meaningful to the EU.

What about an EU office in Northern Ireland?

There are also notable efforts on both sides to bring down recently raised temperatures over an EU request to have a permanent office in Belfast in order to monitor whether the UK is keeping its commitments under the Irish Protocol. That’s the document which replaced the Irish backstop. Remember that painful debate?

Of course, the protocol is not part of the current trade talks. It’s contained in the Brexit divorce deal which covered citizens’ rights, the UK’s financial obligations on departure and provisions made for the border between Northern Ireland and Ireland. But how the EU and the UK are now implementing that Withdrawal Agreement very much contributes to the mood music in their trade negotiations.

You come across many EU diplomats who say it’s made them more mistrustful of the UK.

In the Withdrawal Agreement, Boris Johnson signed up to Northern Ireland effectively (though not in legal terms) remaining in the EU’s customs union and single market for goods, in order to avoid a post-Brexit hard border on the island of Ireland.

This will necessitate at least some checks and/or controls on goods and live animals coming from Great Britain into Northern Ireland – if those goods would, or could, then enter the EU’s single market via the Republic of Ireland.

Yet the prime minister has repeatedly insisted there will be no checks at all. The UK has also not started building any visible customs infrastructure in Belfast – all leading to open criticism from the EU. It has also brought a repeated request from Brussels to have a permanent office in Belfast to monitor the customs situation as of 1 January 2021, when the protocol is supposed to be operational.

Cue outrage in the UK. And frustration in the EU.

But the EU’s chief negotiator has now begun to talk of alternatives to the Belfast office. Just as Michael Gove admitted some “light-touch checks” would be necessary. When asked about controls on Tuesday, Mr Gove said: “The proof of the pudding is in the talking between the UK and the EU about how we make sure that the protocol can be implemented.”

Good enough for Brussels. For now. Michel Barnier says the UK assures him all is being done to respect the protocol. Still, the EU would prefer to see a timetable for when customs posts, officers and IT systems will be ready..

Back again to trade talks.

Some say a crisis point and a ticking clock is what it takes to turn the wheel and find solutions. That’s what happened in Brexit negotiations back in November.

But in these fraught and challenging times, you could forgive those in the EU and UK who ask if more uncertainty and tension is really what’s needed right now.