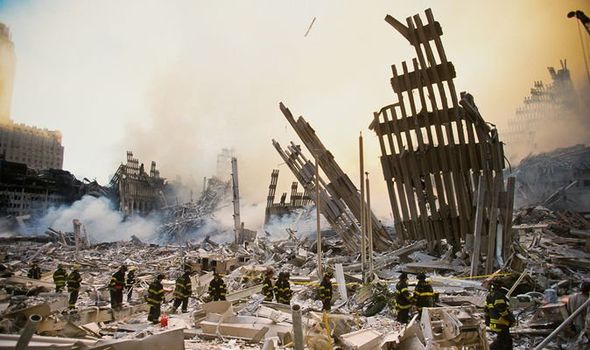 Matt Campbell was making sandcastles with his 18-month-old daughter Esme in Lanzarote on Tuesday, September 11, 2001. His wife Melanie had taken their six-month-old, Phoebe, for a stroll along the beachfront when she noticed groups of people clustering around televisions in cafes and bars.

Peering through a doorway, she saw images of smoke billowing from a New York skyscraper. Knowing Matt’s younger brother, Geoff, worked there for the Reuters news agency, she hurried back. “Don’t worry,” Matt reassured her, “Geoff works in Times Square.”

But he decided to call his brother, just to be sure. Unable to reach him, Matt called his other brother Rob, the youngest of the three, who’d managed to speak to Geoff’s fiancée, Caroline Burbank, in New York.

“Rob blurted out that Geoff was in one of the towers. I remember dropping the payphone,” says Matt. “At that point, I knew Geoff had gone. I had to organise flights back to the UK but we couldn’t get back until late on Thursday when I allowed the shock and the grief to pour out of me.”

By then the family knew Geoff, 31, a risk analyst from Northampton, had been on the 106th floor of the World Trade Center’s North Tower, the first to be struck at 8.46am.

Reuters flew them to New York, where, clinging to the hope survivors might be lying unidentified in hospital, they frantically searched for Geoff. It soon became clear he was not among the lucky few.

“We ended up going to Ground Zero where the firemen and police were lovely, given what had happened to their own colleagues,” recalls Matt.

The former City IT worker, who has since retrained as a reflexologist, continues: “It all gets pretty hazy but I think we’d been there a week before we came home.

“On September 30 we went up to Northampton for a memorial for Geoff at a friend’s pub.

“We had no remains or even a death certificate. It was a sad night but it was a celebration of Geoff. We remembered how much fun he was and how warm he was.”

Painful months went by with little news but, in June 2002, a collar bone was finally identified via DNA and sent to the family. Matt kept it at home in the hope further remains might be found. Two years later, Caroline flew over for burial at a church in West Sussex and there was a second service in 2008 after more of Geoff’s remains were found.

Just three weeks before 9/11, Geoff and Caroline had flown to Britain to visit friends and family. “Geoff announced they had got engaged,” remembers Matt. “That seems such a long time ago now.”

Twenty years on, Matt still has doubts about the findings of the official 9/11 inquiry and wants a new inquest.

The family has filed a request to the Attorney General’s office along with 3,000 pages of documents.

The life of Jonathan Egan, then an 18-year-old student, changed forever when he lost his father Michael, 51, and aunt Christine, 55, both from Hull, East Yorkshire. Christine was visiting her brother, a vice president at insurance giant Aon, at his office in the South Tower when it was hit by United Airlines Flight 175.

Michael, an office fire warden, died helping his colleagues evacuate, while Christine, a trained nurse, may have been tending people in the building’s lobby.

Now a parent himself to 11-week-old Dean Michael — poignantly named after his grandfather — Jonathan, 38, recalls being woken up by staff at his Los Angeles college dormitory 20 years ago.

“My roommates were in the living room, watching the TV and they said, ‘Hey Jon, look what’s happened to your city’,” he recalls. “I turned around and saw the replay of the towers going down and I knew that my life and the world were changed forever.”

Jonathan, a Briton who today lives in New York, called his mother Anna, who broke the dreadful news that his father was gone.

Jonathan says: “He got to say goodbye to my mother, which was a blessing.”

As the closest DNA match to his father and aunt, he took four flights to reach his family and aid identification efforts at Ground Zero.

He remembered DNA testing being performed in refrigerated trailers where bags of body parts were being kept.

Today, he has a tattoo with his father’s initials, an unofficial family coat of arms and the word “imagine” – a reference to Michael’s love of John Lennon.

Jonathon married wife Audrey, 34, and, following in his father’s footsteps, is a partner at insurance brokerage life firm Lockton.

He remains very close to his 67-year-old mother and 36-year-old brother Matthew, who has Down’s syndrome, but admits to missing his father’s presence during key life moments.

“There’s a lot of questions along the way, dating girls, getting married,” he says. “The birth of my son is certainly the one that has made me think about and miss my father the most.”

In the South Tower, Janice Brooks had decided on an early start at her desk on the 84th floor where she worked for Euro Brokers.

Janice, 41, had flown to New York just a few weeks earlier with her Yorkshire terrier, Sidney, for a new life in America.

When told of a strike on the North Tower, she headed for the fire escape, but moments later the South Tower itself was hit.

“I was about five steps into the corridor when I felt a dull thud, the building shook for about five seconds, and I fell back against the wall,” she recalls.

“I remember the ceiling coming down behind me and smoke and dust filling the air. Then I heard a woman’s blood-curdling scream, and a man shouting for help.”

With help, she cleared debris and opened a door to find six dazed people.

“The first woman had blood all over her arm, which was cut, almost neatly, from her shoulder to her elbow,” she says. “I saw the bone and her skin just flapping. One of the guys took his T-shirt off and wrapped it around her arm.

“Another man had huge pieces of glass in his chest, which the others were pulling out.”

The group found a staircase and began trying to get down.

“The woman in front, with the arm, only had half a shoe on. Each step she took, she left a bloody footprint. I remember looking down at my left foot and seeing blood oozing through my bare toes as I stepped behind her.”

Downstairs, a policeman told them to keep their heads down, and “don’t look up and don’t look back”.

But walking to her apartment in Lower Manhattan, Janice did look back and saw a huge gaping hole where her office had been.

Once home, as she started calling loved ones to let them know she was safe, the first tower collapsed.

“I felt the building move, the crockery in the dishwasher rattle, the windows were vibrating and humming and, as I looked up, I dark building billow saw darkness creeping around my building. I watched in a trance as the billowing cloud seemed to move in slow motion as one by one my windows were blacked out.”

Now back living in the UK, Janice works with the British education charity since 9/11, visiting schools to talk to children about what happened.

Susan Rescorla will invite 30 friends and family to her New Jersey home tomorrow to remember her British-born husband Rick, who sacrificed his own life while helping some 2,700 office workers to safety.

“For the last 19 anniversaries of 9/11 I’ve stayed in my house alone, just taking phone calls, but this year I want people around me,” says Susan, 79.

It will be a day of tears, stories and memories as she remembers honeymooning in the port town of Hayle in west Cornwall, where Rick was born and grew up.

After a spell with the Parachute Regiment, he joined the US Army, serving in Vietnam and rising to colonel.

His ability to keep cool came to the fore as head of security for banking giant Morgan Stanley on the mid floors of the South Tower.

“This is God’s honest truth,” says Susan. “One month before 9/11, he was very quiet. He knew something was going to happen. Working in security, he knew what the chatter was, the ripples from the FBI. He was preparing emergency exit drills way ahead of time.

“That morning I got a call from a friend saying ‘turn on the television’. Finally, Rick called me and said, ‘You have to stop crying. I have to get everyone out of the building but if something happens to me I want you to know – you made my life’.”

It was their last conversation. Rick — who had ignored an official message over the PA system telling people to stay at their desks — began evacuations, leading most of Morgan Stanley’s 2,700 employees to safety.

Then he went back into the building to look for survivors and was last seen on the 10th floor when the South Tower collapsed.

Both divorced and with five adult children between them, Rick had been diagnosed with prostate cancer in 1994.

Shortly before 9/11, he was given a clean bill of health.

“Rick was a joy to be with, we loved each other so much,” says Susan. “Every weekend we would go for a ride into the country. We visited England and a very old church in St Ives in Cornwall to renew our wedding vows and Rick gave a wonderful speech.

“We went back to his mother’s house and he wrote it all out and then presented it to me in a frame. It hangs on my bedroom wall. I read it every day and cry.”

It’s a highly personal poem but, in it, he talks of them as lovers blown on a sacred wind; and that while their footprints would one day be washed away, their souls will go on for all eternity.

Susan, who like many bereaved by 9/11 has no grave to visit, added: “Even though he became an American citizen, his heart was always in Cornwall,” says Susan. “Once Covid is over I’ll go there for one last time.”