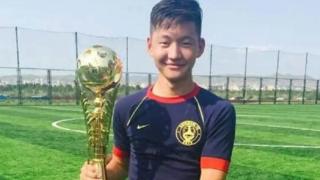 On a cold, dark Mongolian morning, a teenager leaves his family’s tent and heads to school through thick, smoky air.

The 14-year-old lets himself into the gym, turns on the lights, and gets to work, alone.

He kicks a ball against a wall. He practises turn after turn. He runs and jumps and sweats and – bit by bit – he improves.

As the clock nears 08:00, he gets changed, leaves the gym, and begins normal lessons. But in the classroom, he dreams about football.

He wants to be a player. He wants to move abroad. And he wants his name in lights – or at least, on the back of his shirt.

Amazingly, the offer comes sooner than he dreamed. But the offer – and the dream – is not what it seems.

Ochiroo Batbold was five when his family moved from Tov province to Ulaanbaatar. For provincial Mongolians, it’s a common journey – there are more opportunities in the capital.

Like many newcomers, the family moved to a ger district, where round tents sit among brick and mortar buildings. In the winter, chimney smoke would choke the freezing air.

Football is not the main sport in Mongolia. The climate suits indoor games, so most boys wrestle and play basketball.

But as a teenager, Ochiroo played Fifa on the PlayStation. His older friends introduced him to Manchester United and he became hooked.

He wanted to be like Wayne Rooney, so he started practising with a ball. And, when winter came, he spoke to his school caretaker, got the key and went to the gym every morning.

Then – two years after he started playing – he joined a team. And, at the same time, a reality TV show.

When businessman Enkhjin Batsumber grew up in Mongolia, basketball was the main sport. “For us it was Michael Jordan, Chicago Bulls,” the 37-year-old says.

“But I became a football fan because of my father – he is a big Chelsea fan. His generation is heavily influenced by the Soviet Union.”

Enki was passionate about Mongolian football, but frustrated. There were no chances for young players, he thought, and fans preferred to watch the English Premier League.

So, in 2013, he set up his own team – Bayangol FC. He needed help, so he contacted Paul Watson – an Englishman who had written a book about coaching in Micronesia, another football outpost.

“He knew I was crazy enough to take something like that on,” says Paul.

After Paul flew to Mongolia in October 2013, the club auditioned for new players. The trials were filmed for a Mongolian TV show – Dream Team.

One of those players was Ochiroo. He wasn’t the most talented, but Enki and Paul liked his attitude. One morning, they drove to School 107 to see if he really did train at 06:00.

“We drove through thick smoke, through the hills, freezing cold,” says Enki. “And there he was – alone in the gym, practising against the wall, jumping on chairs. I will never forget it.”

Their decision was made. Ochiroo, aged 16, was in the team – and on the show.

Bayangol were successful. They finished second in a breakaway league, and then moved to the official Mongolian system.

After winning the amateur championship, they played in the second tier in 2015, and were promoted to the Mongolian Premier League. But at the celebration dinner, not everyone was happy.

“Ochiroo was unusually withdrawn,” remembers Paul. “And that’s when he confided in us.”

A US-based agent had approached Ochiroo on Facebook, offering a trial with the major US team, Los Angeles Galaxy. The agent said he required a fee, $6,000 (then £3,800), which the teenager had paid.

“He said the agent had gone quiet, but he didn’t know why,” says Paul. “But we knew pretty much from the off.”

When the “agent” approached Ochiroo, the teenager wanted to ask Paul’s advice.

“But the way these guys operate, they tell the player not to tell anyone – especially their club,” says Paul. “If you tell the club, they say, they’ll stop you leaving.”

So Ochiroo was scammed. Even worse, his family – who borrowed the money using their ger as collateral – faced losing their home. “Basically,” says Enki, “they put everything on the line.”

Five years on, Ochiroo says “desperation” led to him falling for the scam.

“I wanted to believe anyone who could help me,” he says, via Enki translating. “It was a decision based on emotion.”

After telling Paul at the restaurant, they want back to the Englishman’s flat. “He was in tears, telling us all the details,” says Paul. “It was pretty dreadful.”

Once the scammer got his money, he stopped replying to Ochiroo. But, after the teenager said another player wanted a trial in LA – and was prepared to pay – the scammer replied.

Paul called him. The scammer answered, but was cagey. Paul got an LA address, which he reported to the police, but nothing happened.

In short, the money was gone.

Ochiroo was not the first player to be scammed by a fake agent. There are countless stories, and the players’ union, Fifpro, has often warned about it.

But that was no consolation to Ochiroo – or his family. “It was a huge blow,” he says. “It seemed unreal.”

Although the trail was cold, Paul was determined to get Ochiroo his money back.

“He’s one of those kids – you can’t help but love him,” says Paul. “But also, when you take on a club like ours, you feel very responsible for them [the players].”

After London’s Evening Standard covered the story and Paul appeared on TalkSport’s Hawksbee and Jacobs show, the total was reached – with help from Mongolia’s Manchester United supporters’ club.

Ochrioo’s home was saved. But despite that, the tricked teenager considered giving up football. So what happened next?

“After the scam, I lost all belief,” says Ochiroo. “But after the fundraising – and the comments from people who helped – it gave me my belief back.”

With his faith restored, Ochiroo played for Bayangol in the 2016 Mongolian Premier League – but the team were relegated.

And, when Bayangol came fifth in the second tier in 2017 – and then disbanded their senior team – it seemed like Ochiroo’s career had slowed to a halt.

But, after missing the 2018 season through injury, Ochrioo signed for UB City – a new, wealthy team and one of the five or six Mongolian clubs who pay their players.

In 2019, they were champions of Mongolia – with Ochiroo appearing five times. Two weeks ago he played in the Mongolian Super Cup. When the virus allows, UB City will play in the pan-Asian AFC Cup.

It may not be the English Premier League; it may not be Manchester United. But Ochiroo’s name is on the back of the champions’ shirt.

“It’s actually incredible when you think about it,” says Paul.

“It’s no mean feat to play for the best team in any country. And you can’t imagine a worse-case scenario for development than kicking a ball around on your own, in a freezing cold gym.

“There is a really inspirational message – not only for kids who’ve been tricked, but for anyone growing up with little opportunity, and little obvious route.

“It may not be the Disney, Manchester United version. But it’s pretty special to play for the best team in your country.”

Ochiroo – who is known as Wazza, after Wayne Rooney – still dreams of playing abroad, and of playing for his country. Many things have changed since those solo sessions in School 107 – but the ambition is the same.

“I want to thank everyone who helped me along the way,” he says. “I will do everything I can not to let you down, and will do my best until the end.”

And with that, he heads off for training – a professional, a champion, and a footballer who wouldn’t lose to a thief.