A speedboat skims across the waters of the Piquiri river in central Brazil; on board are a group of vets and animal trackers.

The river, the forest and the wetlands are shrouded in a dense fog of smoke.

Wildfires have been burning here for months. They are looking for injured jaguars, a big cat known for its solitary existence and preference for remaining unseen by humans.

All the inhabitants of the Pantanal, the world’s largest tropical wetland, are in dangerously poor shape.

The country’s far-right leader, Jair Bolsonaro, prompted widespread derision on Tuesday when he used a speech to the UN to blame indigenous people in the Amazon for fires in the rainforest

While environmental advocates say he has emboldened illegal ranchers and land speculators to deforest land, he accused the media of lying about the Pantanal, without specifying any coverage he believed to be false.

In the region, the animals have been burned out of their natural habitats and their usual prey have been killed or have disappeared.

The animals attempt to make it through the destroyed charred landscape to the riverbanks for water, for food and for safety.

The largest population of jaguars in the world is here. Spotting them is incredibly difficult. Their distinctive beautiful spotted coat ensures they almost disappear with just a step into the undergrowth. 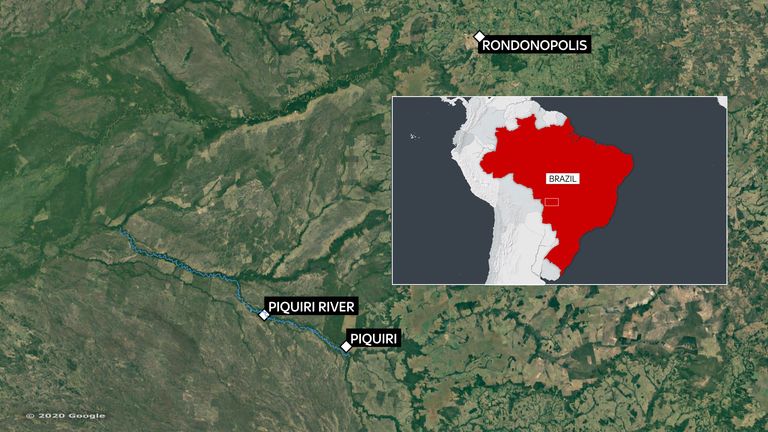 Some of the jaguars who have survived the fire storm are now badly injured and often hungry.

As we pass a burned-out wood, we spot a female jaguar.

To her side, almost completely out of sight, are her two cubs.

As she steps out of the wood we can see she is limping badly, but she has her sights on a family of otters who have just come ashore.

She stalks along the riverbank preparing to pounce, but the otters see her and flee for the safety of the water.

She is now too slow. 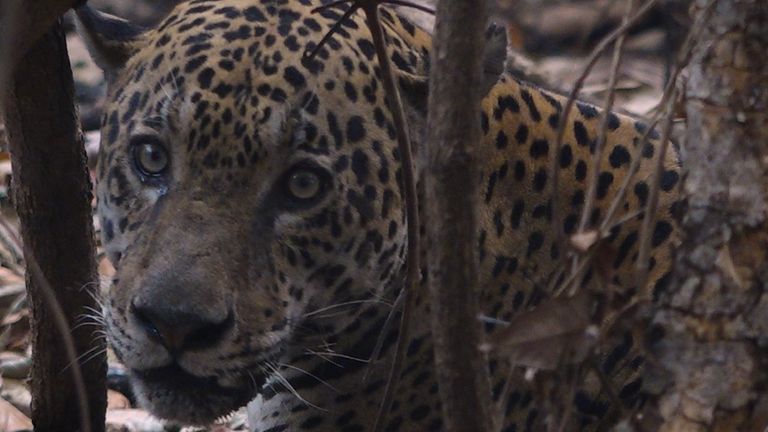 The heads of the otters pop out of the water and they let out a cry, a warning that a predator is nearby.

The jaguar sits down and looks nonchalantly at the otters as they swim away.

She will need to do better next time.

The vets say they have been monitoring this jaguar for the last few days and are unconcerned for her.

She is hunting, she is able to walk and her cubs appear well.

The monitoring will continue but for now they are worried about another jaguar in worse shape.

The tracking and veterinarian teams are specialists in looking after big cats. 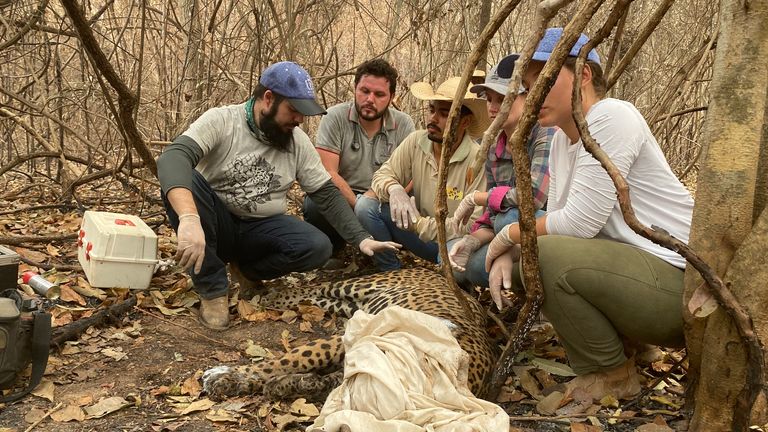 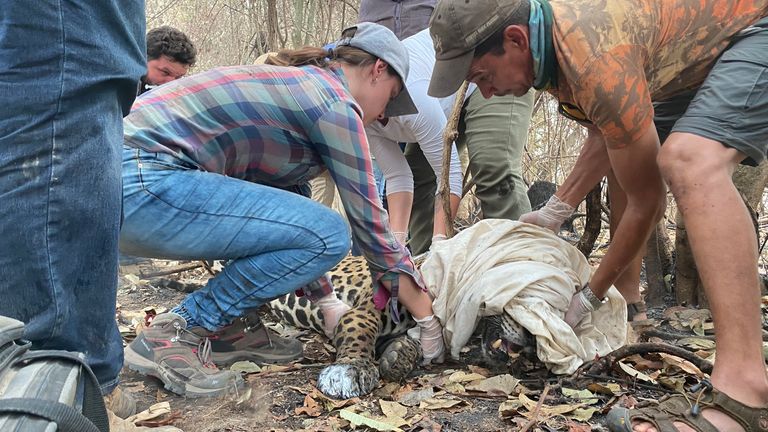 They go out every day looking for the animals who are now suffering because of the fires that have spread throughout the wetlands and grasslands of the Pantanal.

“We hear from fishermen who see the jaguars and tell us if they seem unwell, they take us to where they saw them last,” Eduarda Fernandes, the 20-year-old founder of the rescue task force, tells me.

“There is one jaguar we have been watching who we are worried about. That is who we are looking for,” she adds, gunning the boat’s outboard motor and powering on further down the river.

Reports are coming in from fishermen that they have seen that same injured jaguar nearby.

The team gather themselves and consider their options.

They will tranquillise the animal and assess his injuries. 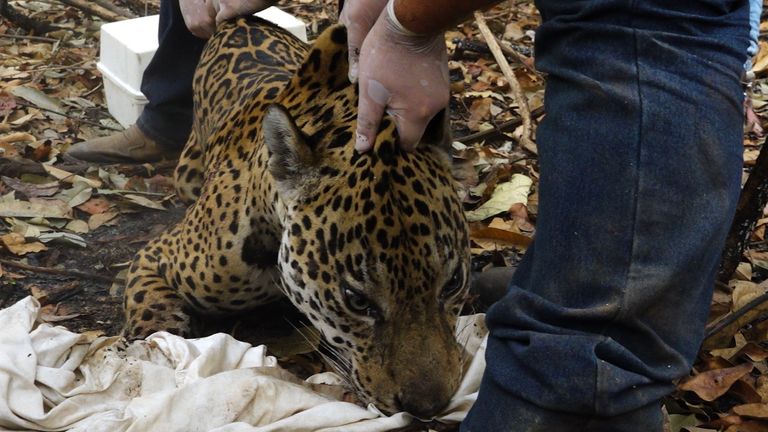 If he can be treated on site they will do so and let him be. If he is worse than expected, a helicopter will be brought into the wetlands and he will be taken to a specialist vet facility.

The team head off.

We catch up with them and find the vets surrounding the jaguar, which is awake but heavily sedated.

He is well over six feet long and powerful – panting but unable to do anything as the vets assess his injuries.

He has a few bite marks and one of his front paws is raw, swollen and sore.

Working as a team, they wash the jaguar’s injuries, spraying bite marks with a silver sealant spray. 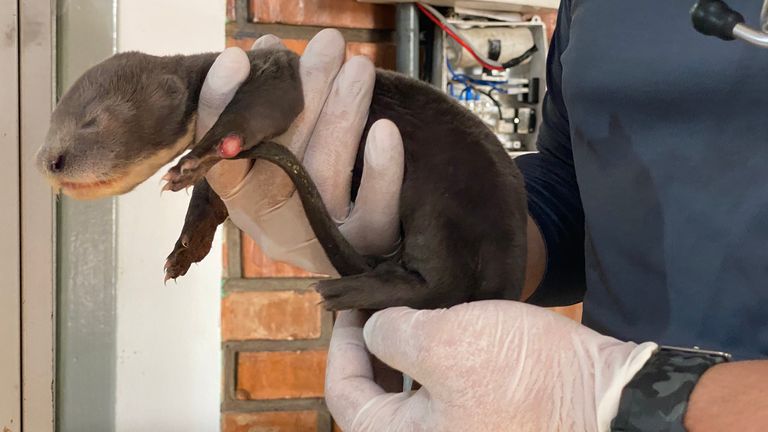 Ms Fernandes says it is likely that the jaguar has been in a fight with another male or injured while hunting.

“Because of the fires the jaguars are changing their territory, and there they can find other jaguars and dispute the territory, so we think that probably this jaguar had this problem because of it, the fires, that maybe [it] fought with another male or female.”

They estimate this jaguar is between four and five years old.

Beside him are the remains of a wild pig.

This is a good sign – he is able to hunt – and they determine that after medicine and antibiotics he can be left here.

They patch him up then move him farther into the blackened forest away from the river. For the next hour they keep an eye on him as he slowly recovers from the tranquiliser and unsteadily, at first, gets to his feet.

He will recover, but so far the Pantanal has not.

Tens of thousands of square kilometres have been destroyed by fire.

A drought and soaring temperatures have left an area the size of Wales burned to the ground.

There are always dry season fires here, but nothing like this.

But the Pantanal Biome itself spans two states and more than 15,000 fires have raged here virtually without check since June.

The bodies of caimans, an indigenous alligator, lie where they died attempting to escape the flames. 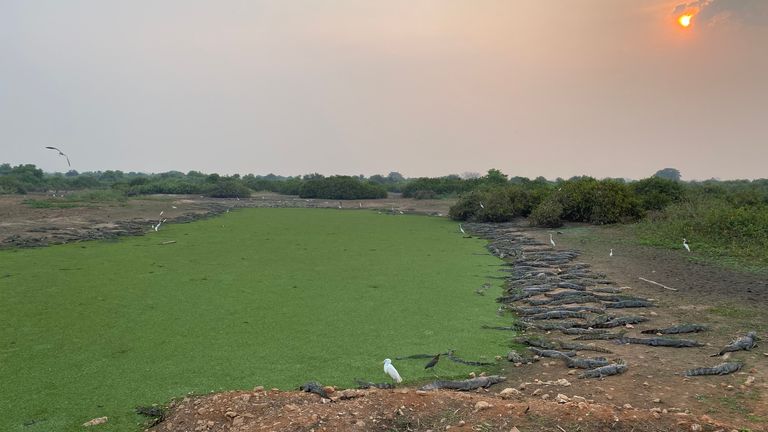 Countless numbers of mammals, birds and insects have been wiped out.

The fact is the Pantanal is an intrinsic part of life in this part of Brazil.

Humans, animals and vegetation depend on the wetland being healthy. All co-exist.

“The Pantanal is now just trash, trash; it’s incinerated,” our guide Roberto Macedo, tells me as we make our way through the smoky waterways.

“It’s very bad, it’s bad for everything; for tourism, for animals, for fishing, for local people. This destabilises our culture and everything here.”

“Pantanal needs water (but) it’s dry for five, six months. No water and the vegetation is dry. It’s like gasoline,” he says. Driving through the Pantanal is certainly depressing.

The scale of the damage is difficult to comprehend.

Large ponds, a vital source of water and food, are almost dry. Caimans, hundreds of them at a time, congregate around the dwindling water supply. Birds hop between them looking for fish.

Each day without rain, the situation gets worse.

The Pantanal will survive this drought and the fires for certain. The guides and vets here say when the rains come life will return, and the animals and the park will recover.

But the long-term concern is that these fires could happen again next year, and then the year after that.

These wetlands can survive one devastating year and maybe another, but it cannot survive such devastation indefinitely.