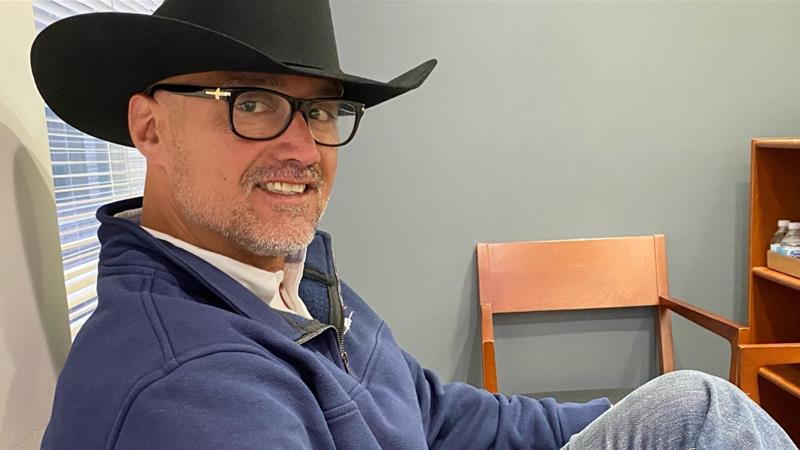 The 2020 US presidential contest is entering its final stretch, with the campaigns of President Donald Trump and former Vice President Joe Biden navigating an uncertain landscape. They are pitching their cases to the electorate amid widespread unrest about police brutality towards Black people and concern about the state of the economy, while many states are struggling to fully reopen due to the coronavirus pandemic.

Biden continues to lead in national polls, although the race has tightened considerably in crucial battleground states, which tend to decide the race.

Chuck Rocha, a political consultant and former senior adviser to Senator Bernie Sanders’s 2016 and 2020 presidential campaigns, has worked for years to craft strategies for outreach to Latino voters. Sanders looked set to win the Democratic nomination before an unprecedented consolidation of moderate support for Biden before Super Tuesday. Sanders did this, in part, by winning huge swaths of the Latino electorate, thanks in part to Rocha’s Latino outreach strategy.

Rocha has been working to help Democrats win in 2020 by aiming to boost the Latino turnout in key states, and has released his Latino outreach strategy in a new book, Tio Bernie.

Al Jazeera spoke with Rocha on the state of the race and Latino outreach.

Al Jazeera: We’re seeing Trump close the gap in a lot of the important swing states. What do you attribute this to?

Chuck Rocha: No matter who the candidates are anybody who’s worked in politics more than 30 seconds knows that as you get closer to Labor Day folks start … “coming home.” We always expected it to tighten, to a certain degree, when you add in an age of corona, and what’s going on with the economy, and then you add in people of colour dying at a higher rate, people of colour having more anxiety because we’re losing our insurance and our jobs at a higher rate than white people. You have the perfect storm for a lot of just overall anxiety, and then … you have these virtual contests and virtual conventions that nobody really paid attention to. 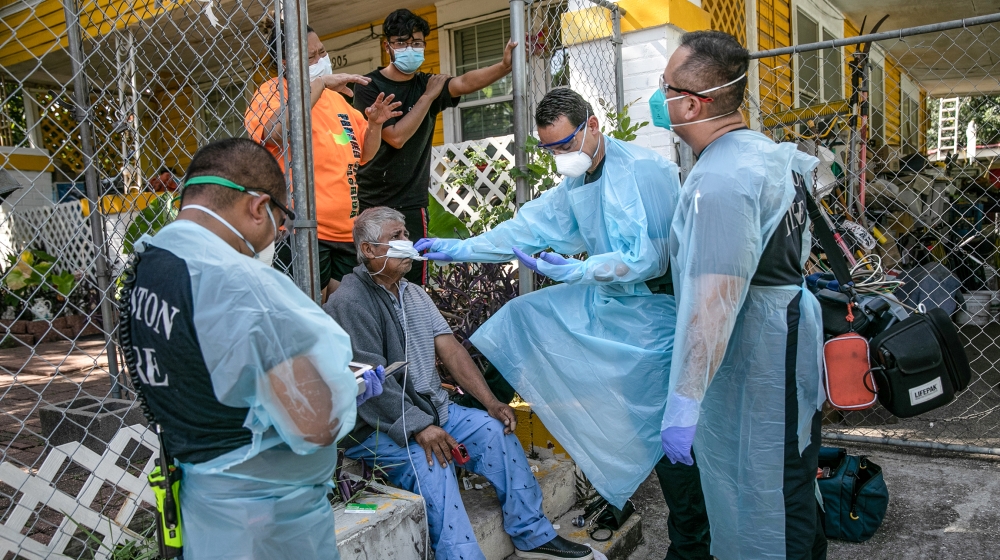 And then you have independent voters who have been flocking to Biden over the summer, a lot of those are “Republican-light”. With the convention – “the show”, I would call it more than a “convention” – that Donald Trump had, you’re going to get a few percentage points of those folks to come back.

Trump had to do three things in that convention: Show that he wasn’t crazy, that white people that were leaning away from him would come back home, and then dig into the high percentages of the Black and Brown vote that Biden was getting. I think he accomplished all three.

Al Jazeera: What do you think the Biden campaign should do to appeal to Latino voters in swing states, where they often are overlooked? Do they have a special set of needs or desires among the Latino electorate?

Rocha: I just finished writing a book called, Tio Bernie, that outlines this in great detail. It’s not some silver-bullet policy position that gets Latinos to vote for you. It’s the very elementary act of just going and asking for that vote. Meeting them where they’re at, and then having a conversation about what’s going on in their lives and how you can make their lives better.

So to answer the question, I would say, they need to be asking those Latinos in Wisconsin, in Michigan, and telling them what Joe Biden is going to be doing for them to make their lives better in the age of corona.

Now, what worries me is that I’m not seeing a lot of Spanish language advertising from the Biden campaign in those states. They have started … I’m seeing more spending which makes me feel better, but it’s not enough compared to the white spending.

I’ve been running Spanish ads [through] Nuestro PAC … in Michigan, but right now, if you take the aggregate of all of the dollars that have been donated outside of the campaign to independent expenditures, Latino focused super PACs have gotten less than 1 percent of the $500m I’m currently tracking that went to white super PACs that are focused on white persuadable voters.

So that to me … is very alarming. Our community is not getting the information they need … I’m afraid they may stay at home. Because if we don’t get the money to go and talk to them like I did in Bernie Sanders’ primary race, it’s a proven fact that Latinos underperform, but like, I write about in the book when you do invest in them and you do have a conversation, they will show up in extraordinary rates … way better than white persuadable voters.

Al Jazeera: If the Republican Party were to change some of its more controversial stances and reach out to Latinos, do you think the Latino populace would be in the pocket of the Democratic party 20 years down the road?

Rocha: No, no, no. The numbers bear it out. If you look at the way Latinos are registering to vote, who are coming of age and registering at a much larger rate than white people, they are registering as a non-party preference voter. They’re registering as not a Democrat or Republican and the reason behind that is obviously Republicans don’t talk to them because they’re ideologically more left … the base of what a Bernie Sanders supporter would be.

And then the Democrats don’t talk to them because they’re not a “prime voter” – a regular voter with regular voting history. So they don’t really get talked to, and normally, their parents, who didn’t vote because the Democrats have never talked to them, are not teaching them to be Democrats.

That’s outside of small enclaves like East LA where La Raza is really strong or in New York City. Outside of the strongholds … Latinos don’t know who they belong to. So, as these people come of age, we continue to do politics in the same way, we’re creating this huge persuadable demographic that will not be beholden to any party, it becomes less Democratic every year as older, frequent primary voting Mexicans who are the base of the Democratic Party die off, [and their] children are not more open-minded to either party.

Al Jazeera: Are there any surprising electoral pitches that have had an impact on Latino voters this election?

Rocha: I’ve been doing focus groups in non-traditional places this year with infrequent Latino voters. Let’s take North Carolina, where they have this growing Latino population of mainly children of immigrants who went there to work in the textile and farming. I had two sets of focus groups where we’ve separated the men and the women. And what we found was: A) Neither one of the groups really trusted or liked to Donald Trump, but they were tired of hearing about his rhetoric, and B) both groups wanted to know what the Democrats are [and what] Joe Biden was going to do with them.

They knew … that Bernie was for a $15 minimum wage, he was for healthcare for all, for a Green New Deal and the basic things that Bernie Sanders talks about in his sleep. 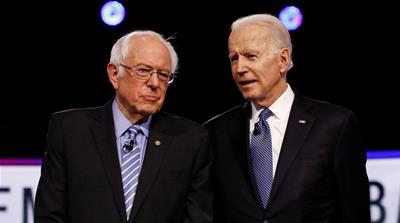 But the thing that was really striking to me is, and it was reinforced with the Republican convention … is how much more conservative and open-minded the men were to liking Donald Trump and liking messaging around “Law and Order”.

This don’t mean that Trump would get a majority of men … but they could cut off 2 percent, 3 percent, 5 percent that maybe won’t vote for Trump, but would stay home.

Some would move to Trump around this messaging [mostly middle-aged men] who have families who are working a middle-class job, or lower-middle-class, who do worry about the violence that they see on TV.

Trump is connecting it to what’s going on in the country. It’s a smart electoral strategy as much as it’s a horrible policy, in my opinion.

Al Jazeera: Do you see a comprehensive effort in the Democratic Party to understand the differences in various Latino demographics or electoral strategies?

Rocha: No, there’s not. I think that there are good faith efforts. It’s been a slow waking-up to this problem. And we, we still haven’t addressed the core root of it, which is when the paid communication starts. They still see us as just “Latinos”, as just somebody who goes knocks on other Latino doors, or is in charge of some feckless, non-budgeted Latino department in a party apparatus … or campaign. And they don’t see us as part of the overall hierarchy of campaigns.

You just started seeing that changing in the presidential primary we had people of colour in leadership positions which is the first time ever in the history of American politics was so many. Me with Bernie, [Representative Joaquin Castro]’s manager, [Senator Kamala Harris’] manager … that was the first big change I saw.

I think it’s important that I released the book at this time around the conventions on purpose, people were telling me I was stupid because I was giving away my secrets and they can just do what’s in the book. Good. The book says go to our community and invest money.

Start as early as you can. It’s not rocket science.

This interview has been edited and condensed for clarity.