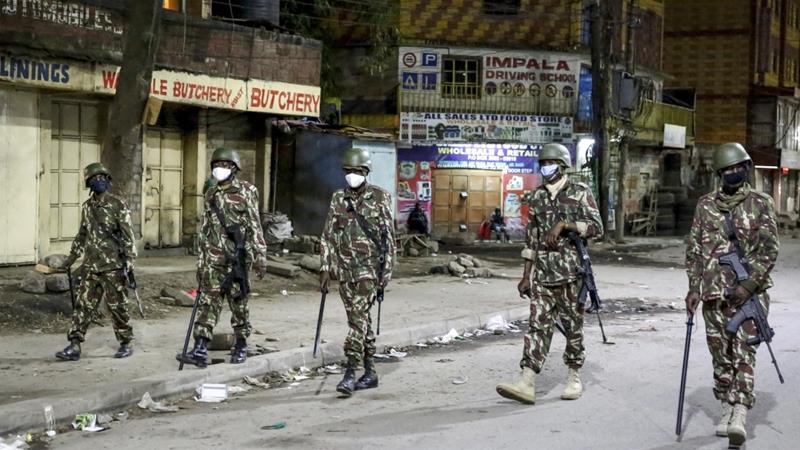 Three Kenyan police officers have been arrested after a widely circulated video showed the men dragging a woman behind a motorcycle and whipping her.

The arrests on Thursday came after the video taken the previous day in Kuresoi South, west of the capital, Nairobi, sparked outrage among social media users, activists and others.

In the one-and-a-half minute clip, a police officer is seen riding a motorcycle, 21-year-old Mercy Cherono being pulled along behind it, while others beat her. The ordeal causes her trousers to slide off, leaving her naked from the waist down.

“Three officers were yesterday arrested … following circulation of a video depicting a woman being whipped & dragged on a motorbike in Kuresoi South Sub-County,” the Directorate of Criminal Investigations said in a statement.

“The suspects are in lawful custody helping with further investigations into the matter,” it added.

The woman was reportedly accused of breaking into a police officer’s house.

The Independent Policing Oversight Authority (IPOA) issued a statement saying it had launched an investigation into the matter.

The incident came amid an outcry over police brutality in Kenya, where law enforcement officers have often faced accusations by rights groups of using excessive force, especially in poor neighbourhoods.

On Monday, protesters poured onto the streets of Nairobi after the IPOA said police officers were involved in the killing of at least 15 people since the enforcement of a dusk-to-dawn curfew to slow the spread of the coronavirus pandemic.

“I am here to protest for our youth who have died at the hands of the police without any wrongdoing,” Rahma Wako, a demonstrator in the capital’s Mathare settlement said. “We are saying, ‘Enough is enough’. As mothers, many of our youth have been killed while being labelled as thieves.”

“[We are] telling them to stop killing our kids,” added Beatrice Rongo, another protester. “Mothers are crying, sisters, everybody – we are all hurt by this injustice of police brutality.”

‘What about African lives?’

In recent days, cities around the world have witnessed major protests against police violence and racism prompted by the police killing of George Floyd in the United States on May 25.

Floyd, an unarmed Black man, was pinned to the ground by a white police officer in Minneapolis, Minnesota. The officer, who has since been fired and charged for murder, knelt on Floyd’s neck for nearly nine minutes, as Floyd pleaded “I can’t breathe”.

Activists in Kenya have taken to social media to draw parallels with the country’s own scourge of police brutality, which typically goes unpunished.

Prominent Kenyan commentator and cartoonist Patrick Gathara last week drew an image of a man representing African governments holding up a “Black lives matter” placard, while kneeling on the neck of a man asking: “What about African lives?”

In April, Human Right Watch (HRW) accused the police of imposing the curfew in a “chaotic and violent manner from the start”, sometimes whipping, kicking and tear-gassing people to force them off the streets.

It described the case of 13-year-old Yassin Hussein Moyo who died in Nairobi on March 31 after being shot while standing on his balcony as police forced people into their homes on the street below.

In others, a tomato seller died in western Kakamega after being hit by a tear gas canister, while four men were beaten to death in different parts of the country.

“It is shocking that people are losing their lives and livelihoods while supposedly being protected from infection,” Otsieno Namwaya, HRW’s senior Africa researcher, said at the time.

In a February report detailing the killing of at least eight people in Nairobi’s low-income neighbourhoods, HRW said police “continue to kill crime suspects and protesters in cold blood despite persistent calls to end the killings and the use of excessive force”.

Minister of Interior Fred Matiangi on Friday criticised police excesses, but “took exception to painting the entire service with the same brush”, his office said in a statement.

It came after the IPOA announced six police officers would be arrested and prosecuted – one for Moyo’s death; another for shooting dead a secondary school teacher while responding to a burglary at a market in western Siaya; and four others for seriously assaulting a man during an arrest.