A plane carrying Belarusian Olympic sprinter Krystina Tsimanouskaya has landed in Warsaw after she travelled to the country under Polish diplomatic protection.

The 24-year-old had refused her team’s orders to return home early from the Games in Tokyo, instead seeking refuge in the city’s Polish embassy. He tweeted: “Kriscina Cimanouska has safely landed in Warsaw. I want to thank all Polish consular and diplomatic staff involved, who flawlessly planned and secured her safe journey.

“Poland continues to show its solidarity and support.”

Ms Tsimanouskaya said she was seized by officials from her own country after she criticised her coaches on social media, and they tried to force her on a plane to Minsk.

She appealed to the International Olympic Committee for help and was later granted a humanitarian visa by Poland, as well as one for her husband, Arseniy Zdanevich.

“She is safe and is doing well under the circumstances,” Magnus Brunner, Austria’s deputy environment minister, said after her Austrian Airlines flight touched down in Vienna en route to Poland.

“She is naturally worried and excited and nervous about what will happen next for her.” 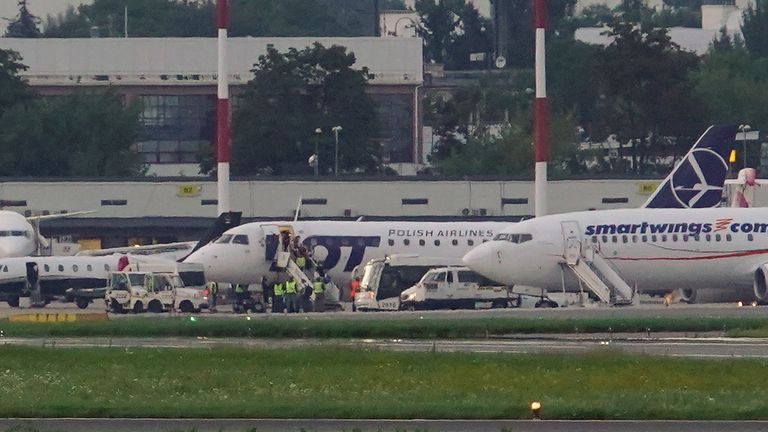 Ms Tsimanouskaya was later seen boarding a LOT Polish Airlines plane, which touched down in Warsaw on Wednesday evening.

The International Olympic Committee said it will question two Belarus team officials who were allegedly involved in trying to remove the sprinter.

Tsimanouskaya had been due to compete in the women’s 200 metres and the 4×400 metres relay at the Tokyo Olympics this week. But she criticised team officials on her Instagram account, saying she was put in the relay despite never having raced in the event before.

She had also claimed some members of her team were judged ineligible to compete because they had not undergone enough doping tests.