Tropical Storm Cristobal powered into the US this weekend with 50mph winds and torrential rain, pouring over the mouth of the Mississippi River and Grand Isle. Packing winds of 50mph, Cristobal was able to cause dangerous weather to ripple outwards into Louisiana, Florida and Alabama before it gradually weakened.

According to the National Hurricane Centre (NHS) in the US, Tropical Storm Cristobal is spinning with wind strengths of 30mph and maximum gusts of 46mph.

The NHC has discontinued all of its tropical storm warnings, but Cristobal remains a life-threatening situation.

Storm surge warnings remain in place for the following areas: 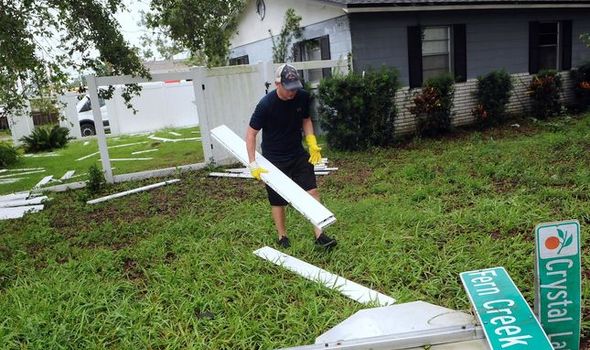 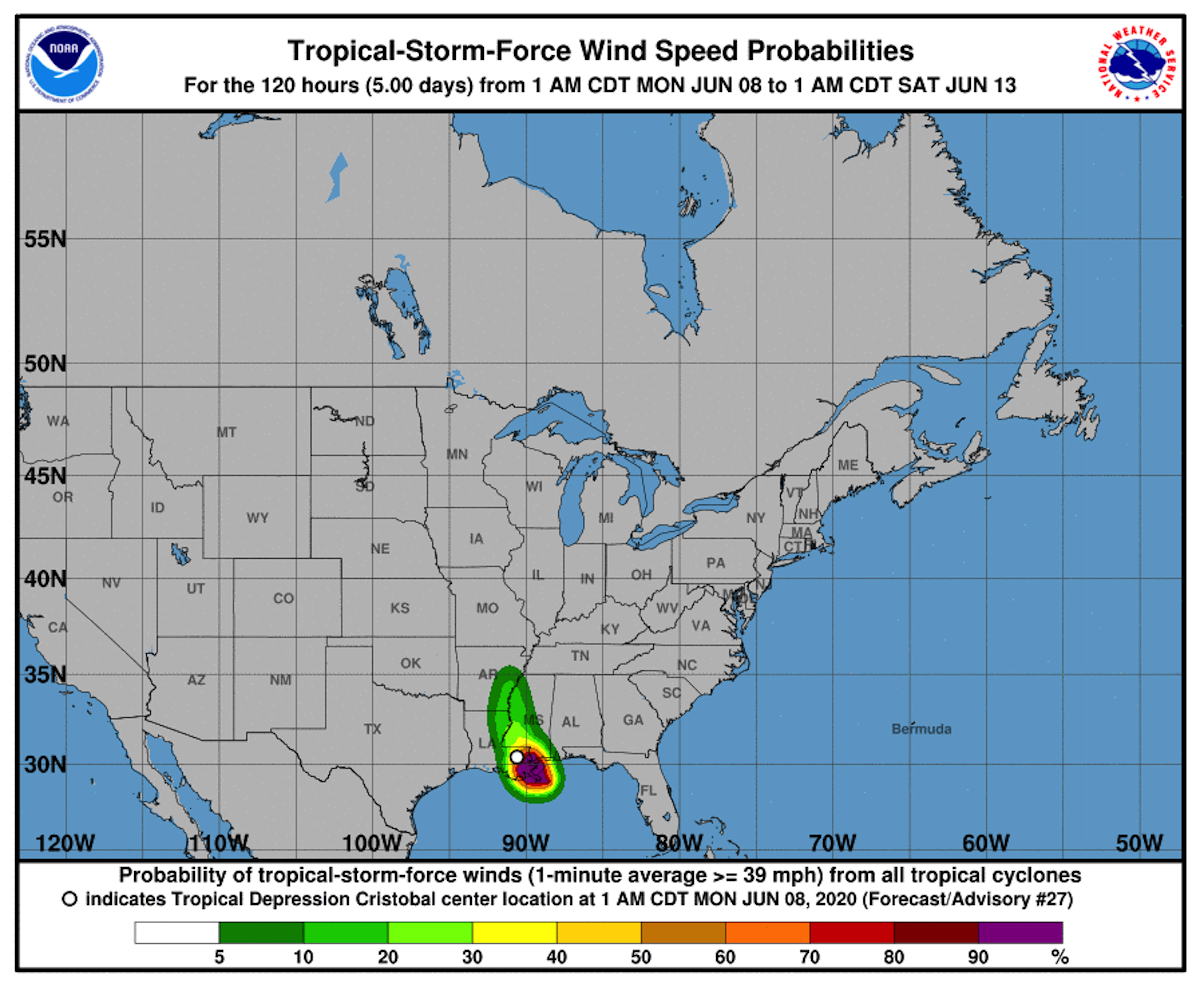 Although the current risk remains from the ocean, the cyclone will eventually regroup and connect with a “mid-latitude cyclone”.

The NHC said the atmospheric storm would “combine” with Cristobal and briefly cause some re=intensification.

Their forecast reads: “The cyclone should continue to gradually weaken for the next 36 to 48 hours as it moves farther inland.

“After that time, some re-intensification is expected as Cristobal becomes involved with mid-latitude cyclogenesis over the Upper Mississippi Valley, and the intensity forecast will call for the system to be a 35 kt (40mph) extratropical low by 60 hours.” 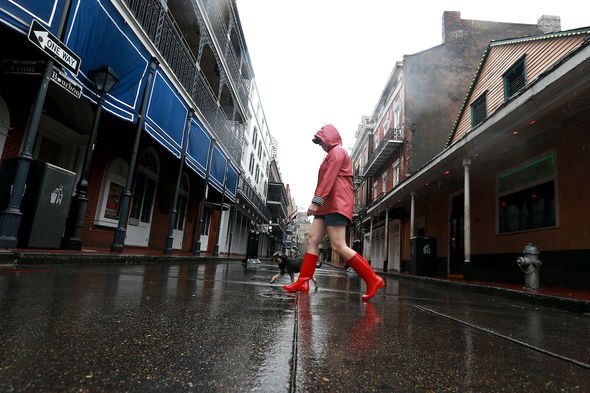 “The cyclone is forecast to dissipate inside the envelope of another extratropical low by 120 hours.

“It should be noted that Cristobal and the mid-latitude cyclone will combine to possibly cause gusty winds over portions of the Midwest and Great Lakes regions.”

The NHC added the storm would also work its way further inland during the week.

They said: “Although Cristobal has weakened, life-threatening storm surge is expected to continue over a portion of the northern Gulf coast today.” 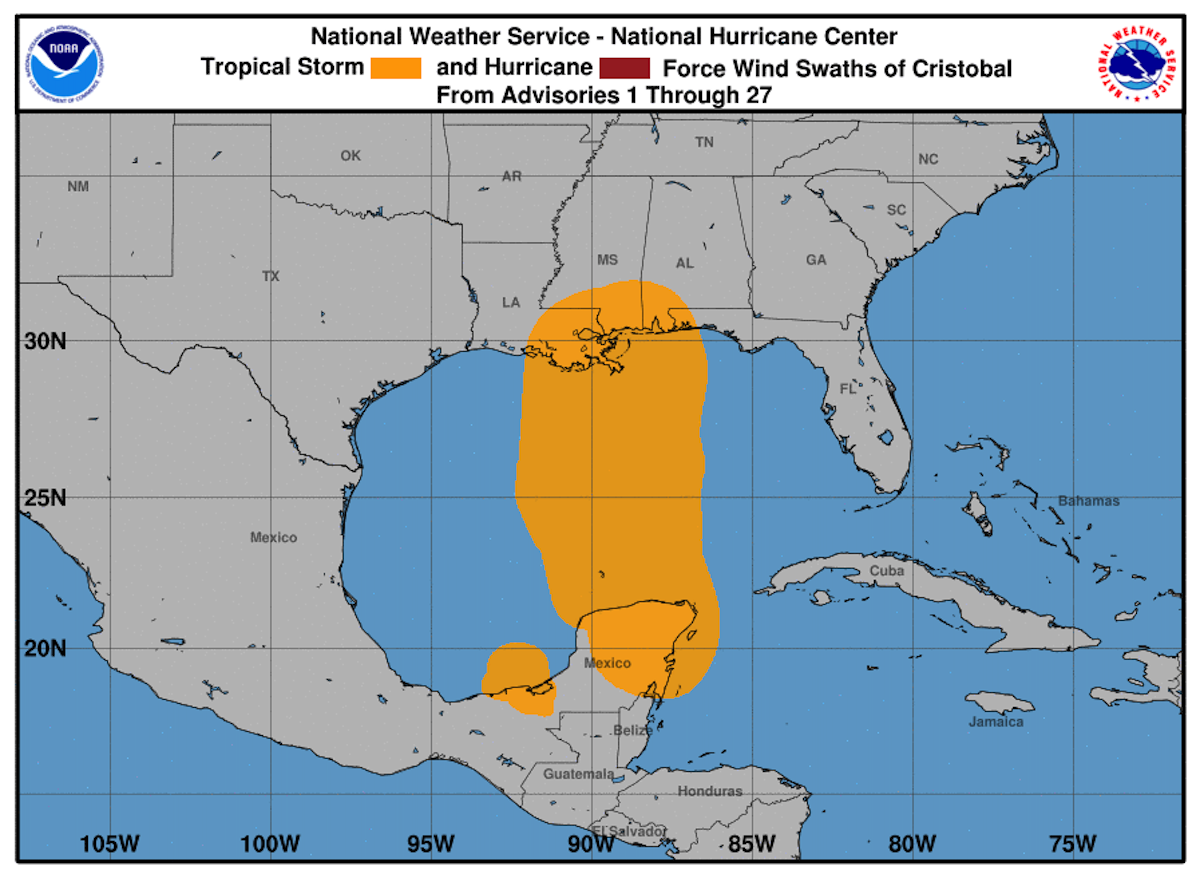 “Heavy rains associated with the system will also spread over portions of the central United States over the next couple of days.”

NBC meteorologist Bill Karins said the storm would maintain wind speeds of roughly 30mph as it wheels towards the northeast US.

By Tuesday, the storm will pass through Memphis and St Louis, with maximum wind speeds of 30mph.

By Wednesday, Mr Karins said remnants of the storm passing over Chicago could command maximum gusts of 40 to 50mph.

He said via Twitter: “Chicago area getting ready for #Cristibal remnants. 40 to 50 mph winds expected Tuesday and Wednesday!”

A timeline posted to his account indicated a “small threat” from winds passing 60mph in the early hours of the day.

By the evening, they should calm once more, but a selection of hazards remain.

People may find themselves without power, while trees may suffer damage and danger increases for high-sided vehicles.