At the Environmental Protection Agency, political appointees have joined virtually every discussion between career staff members and Mr. Biden’s team, monitoring conversations on climate change, scientific research and other topics. At the State Department such drop-ins are happening on what Trump appointees define as an as-needed basis. On Tuesday Mr. Biden’s transition team was allowed for the first time into the National Security Agency, but at the United States Agency for Global Media, parent of Voice of America, the Trump-appointed leader is refusing to cooperate with the Biden transition team, two agency officials confirmed.

Presidential transition experts said the presence of political officials at agency handoff meetings was not unheard-of and could even be seen as helpful. President George W. Bush, for example, worked closely in late 2008 with Barack Obama’s incoming team to help calm volatile financial markets. But against a backdrop of Mr. Trump’s refusal to concede election defeat, the actions of Trump appointees appeared to be a pernicious effort to slow the transition, some experts said.

“The norm is that the political people are not involved in the nuts and bolts of this,” said Michael E. Herz, a professor of administrative law at the Cardozo School of Law at Yeshiva University.

He called the Trump administration’s apparent determination to micromanage the transition process by overseeing meetings part of its broader plan to “milk their authority as long as they can and disrupt the new administration as much as they can.”

Under the Presidential Transition Act, career employees play the primary role in managing the agency transitions, largely because they bring an institutional knowledge about the government functions and have been viewed as unpolitical stewards of the agencies they serve. No clear rules or guidelines, however, detail how the process should unfold.

During the handoff from Mr. Obama’s administration to Mr. Trump, for example, political officials were explicitly disinvited from transition meetings, said Thomas A. Burke, who served as E.P.A. science adviser in the Obama administration at the time.

“To me, that’s the equivalent of having the opposing coach sitting in the room as you’re developing your team’s strategy,” he said.

Myron Ebell, a senior fellow at the Competitive Enterprise Institute who led the Trump administration’s transition for the E.P.A., agreed that Mr. Obama’s political appointees were not present but said he would have liked to meet with them. Regardless, he said, meetings were held in an open-plan office space.

“I assumed that everything we said and the people we were talking to was open to the political people there,” Mr. Ebell said. “And they never said ‘we cleaned the room and it has no microphones in it.’” 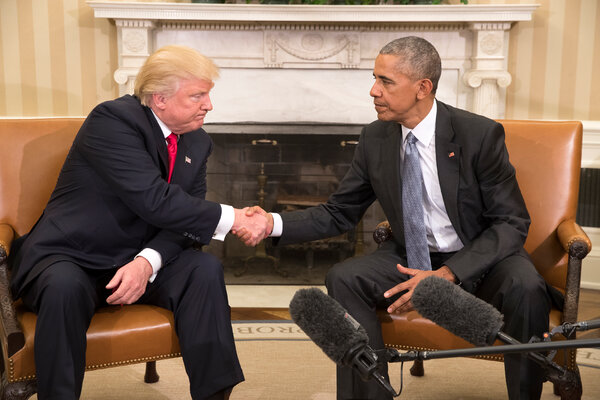 The Biden transition team did not respond to a request for comment on the process. Several people close to the president-elect’s team said that, after taking more than two weeks to begin the formal transition process, the Trump administration’s handover has been fairly smooth and that Mr. Biden is loath to disrupt that process by remarking on tensions.

Federal employees who discussed the transition and asked to remain anonymous because they were not authorized to speak about the process offered mixed reviews on the presence of political leaders.

Several said they felt the Trump officials were implicitly intimidating employees from speaking openly about issues awaiting the new administration. Others described the meetings as merely awkward.

At the Department of Education, one official said Trump appointees had not crashed briefings but said the written briefing materials given to Mr. Biden’s teams “gloss over anything controversial” and described the briefings as “politically influenced.”

At the State Department, Mr. Trump’s appointees have insisted that they attend some, but not all, meetings of Mr. Biden’s transition team with career employees, according to an official familiar with the process. it was not immediately clear if doing so was seen as broadly intrusive or stifling the discussions at the State Department, said the official, who spoke on condition of anonymity.

However, the official said, including the outgoing administration’s appointees in at least some diplomacy discussions was not unheard-of, and that, so far, the State Department personnel had been cooperative in accommodating the Biden team’s requests.

Secretary of State Mike Pompeo has told department officials he was ready to meet with Mr. Biden’s transition team, CNN reported last week, and on Monday described the incoming administration as “plenty smart enough.” That was a shift from late November, when he said in a Fox News interview that Mr. Biden’s foreign policy advisers “lived in a bit of a fantasy world” when they served during the Obama administration.

This week the Biden team was allowed into the Defense Intelligence Agency and the National Security Agency after several days of what two people close to the transition described as an effort by newly appointed Trump administration officials at the Pentagon to slow the transition by blocking access to Department of Defense intelligence agencies.

Susan Gough, a Defense Department spokeswoman, said the agency sometimes adds personnel to the list of people with whom Mr. Biden’s team requests meetings “so that we have the right subject matter experts present,” but she added, “there is no requirement that all meetings be attended by a political appointee.”

No classified material has yet been given to Mr. Biden’s team, and it is not clear if or when that will be made available. Meetings at other intelligence agencies, including the National Geospatial-Intelligence Agency, are expected to come later.

On Tuesday, the Washington Post reported that Michael Pack, a Trump appointee who oversees the Voice of America and other federally-funded news agencies, has declined to make records and personnel available to Mr. Biden’s team.

At the E.P.A., James Hewitt, a spokesman for the agency, confirmed that political leaders were attending meetings and said it was happening with the blessing of Mr. Biden’s transition team.

“Associate Deputy Administrator Benevento asked the Biden environmental transition team if political staff could sit in on transition calls so they could provide any information they might have regarding the agency and they obliged,” he said, speaking of Doug Benevento, in a statement. “We have not been made aware that they have had any concerns with the quality of information provided on those calls.”

Lisa Brown, who served as co-director of the E.P.A. review team during the Obama administration, said after enduring weeks of the Trump administration’s effort to slow-walk the transition, the Biden team most likely agreed to the conditions simply to get work underway.

“They want to get in and see what they can learn rather than wasting time on a fight, is my guess,” she said.

But Ms. Brown described the arrangement as out of the ordinary and worrisome.

“What you have to worry about is the chilling effect on career employees” she said. “You’re going to worry that people are not completely forthcoming, especially when you have a president who still hasn’t conceded.”