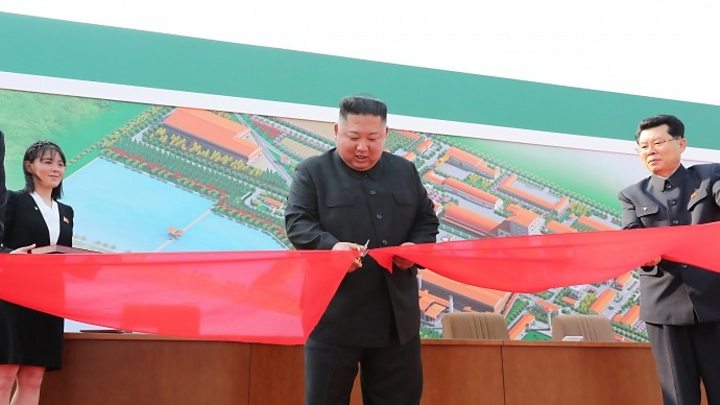 US President Donald Trump has said he is “glad” that Kim Jong-un has re-emerged and appears to be healthy.

“I, for one, am glad to see he is back, and well!” Mr Trump tweeted, after the North Korean leader reportedly attended the opening of a fertiliser plant.

His absence – particularly from his late grandfather’s birthday celebration on 15 April – had sparked intense global speculation over his health.

KCNA news agency reported that Mr Kim cut the ribbon at the opening of the fertiliser factory on Friday, and added that crowds “broke into thunderous cheers of hurrah” when he appeared.

I, for one, am glad to see he is back, and well! https://t.co/mIWVeRMnOJ

On Monday, amid speculation and rumour about Mr Kim’s health, President Trump had said he had a “very good idea” about Mr Kim’s condition, but added that “I can’t talk about it”.

“I just wish him well,” he added at the time.

President Trump and Mr Kim have developed a unique relationship in recent years.

The two men have met three times since 2018, and have exchanged personal letters with each other that Mr Trump has described as “excellent”.

However, talks about the denuclearisation of North Korea have stalled in recent months.

What did the state media report say?

The North Korean leader cut a ribbon at a ceremony at the plant, in a region north of Pyongyang, and people who were attending the event “burst into thunderous cheers of ‘hurrah!’ for the Supreme Leader who is commanding the all-people general march for accomplishing the great cause of prosperity”, KCNA said.

Mr Kim said he was satisfied with the factory’s production system, and praised it for contributing to the progress of the country’s chemical industry and food production, the state news agency added.

What started speculation about his health?

Speculation about Mr Kim’s health began after he missed the birth anniversary celebrations of his grandfather, state founder Kim Il-sung on 15 April.

The anniversary is one of the biggest events in the North Korean calendar, and Mr Kim usually marks it by visiting the mausoleum where his grandfather lies. Mr Kim had never missed this event.

Claims about Mr Kim’s ill-health then surfaced in a report for a website run by North Korean defectors.

An anonymous source told the Daily NK that they understood he had been struggling with cardiovascular problems since last August “but it worsened after repeated visits to Mount Paektu”.

This led to a chain of reporting by international media on a single-sourced story.

News agencies then began to run with that claim, and it was all they had until some reports emerged that intelligence agencies in South Korea and the US were monitoring the claim.

But then came a more sensational headline in US media that the North Korean leader was in a critical condition after heart surgery. 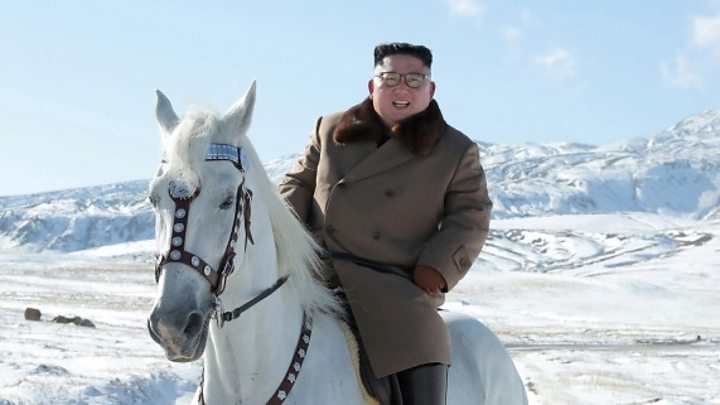 US Secretary of State Mike Pompeo appeared to stoke the rumours on 29 April, by saying US officials “hadn’t seen” Mr Kim recently.

However, a statement from the South Korean government, and sources at Chinese intelligence – speaking to the Reuters news agency – said this was not true.

Has Kim Jong-un disappeared before?

Yes. Mr Kim went missing for 40 days in September 2014, after attending a concert. He reappeared in mid-October, using a cane.

State media never explained where he had been. But South Korea’s intelligence agency said he probably had an operation on his left ankle stemming from problems with a cyst.

Caution is often tossed aside when reporting on North Korea. Thinly sourced, wildly speculative rumours can feed an industry aware that sensationalist headlines about Kim Jong-un are great clickbait.

Reporting on the secretive state is difficult. Facts and sources are very difficult to obtain, especially since the country is even more closed off to the world due to the Covid-19 pandemic. The South Korean government was clear that it noted no unusual activity in the North. Seoul often has the best intelligence from Pyongyang. But even they have been wrong in the past.

There are still valid questions to be asked about a potential successor and what plans are in place should something happen to him.

But there is one thing that has been lost in all of this. North Korea is more than one man. It is a country of 25 million people who are often overlooked. Today, Mr Kim’s reappearance was at a fertiliser plant. The headlines will of course focus on his return, and on where he has been rather than on whether this factory will help the country tackle chronic food shortages.

I assure you, that for the people of North Korea right now, that is just as important as the unexplained absence of their leader.