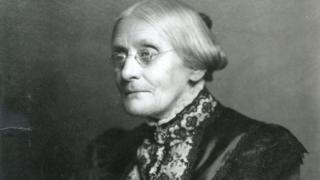 President Donald Trump has said he will issue a posthumous pardon for women’s voting rights pioneer Susan B Anthony.

Making the announcement on Tuesday – the centennial anniversary of the 19th amendment, which granted US women the right to vote – Mr Trump said: “She was never pardoned. What took so long?”

Anthony was arrested in 1872 after illegally casting her vote.

She was later convicted of illegal voting in her home state of New York by an all-male jury.

With his wife Melania Trump beside him for a White House event, Mr Trump also signed a proclamation commemorating the 100th anniversary of the 19th amendment.

Last week, Mr Trump announced his support for a monument in Washington DC to honour the women, known as suffragettes, who petitioned for the right to vote.

Who was Susan B Anthony?

Anthony was convicted in a highly-publicised trial of illegally voting as a women, and was fined $100 by the judge in her hometown of Rochester, New York.

In a speech to the court, she chastised the government for barring women from voting, and vowed to never pay a penny of the fine.

Her arrest brought attention to the voting equality movement, and helped launch her onto the national stage. She went on to merge the country’s two largest suffragette groups and travelled the US giving speeches and holding rallies.