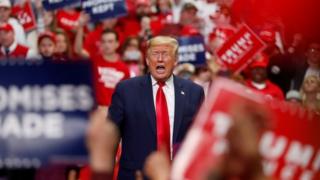 US President Donald Trump is to hold his first re-election campaign rally for several months in Tulsa, Oklahoma on the date that African Americans celebrate the end of slavery.

The rally will take place on 19 June, known as “Juneteenth”.

In 1921 the city of Tulsa was the site of one of the worst massacres of black people in US history.

The news follows weeks of anti-racism protests sparked by the death of George Floyd, a black man, in police custody.

The Trump campaign, referring to the date of the rally, said his Republican Party was proud of its role in winning the Civil War and ending slavery.

Mr Trump’s rallies, seen as vital for energising his base, were suspended due to the coronavirus outbreak in March.

He faces re-election in November but is lagging behind his Democratic rival, Joe Biden, in the polls.

Correspondents say that while the virus remains a threat, Mr Trump’s campaign considers that large crowds at the recent protests will make it harder for his opponents to criticise his rallies.

Announcing the venue, Mr Trump alluded to the low rate of coronavirus infections in Oklahoma – at 7,500 cases one of the lowest in the country.

“We’re going to be starting our rallies,” he said. “The first one… will be in Oklahoma, in Tulsa, Oklahoma. Beautiful new venue, brand new and they’re looking forward to it. They’ve done a great job with Covid, as you know, in the state of Oklahoma.

He said further rallies would take place in Florida, Texas and Arizona, but he made no mention of what safety precautions would be taken and whether social distancing would be applied.

Why are the date and venue controversial?

Juneteenth is an annual commemoration of the end of slavery. While not a federal holiday, it is celebrated widely by African Americans.

It celebrates the reading of the Emancipation Proclamation to enslaved African Americans in Texas.

Texas was the last state of the Confederacy – the slaveholding southern states that seceded, triggering the Civil War – to receive the proclamation, on 19 June 1865, months after the end of the war.

The location of the rally in Tulsa is also highly significant.

In May and June 1921 a white mob attacked the prosperous black neighbourhood of Greenwood, known as the “Black Wall Street”, with guns and explosives – killing up to 300 people and destroying about 1,000 businesses and homes.

Defending the timing of the rally, Trump campaign aide Katrina Pearson said in a statement, quoted by Bloomberg, “that the party of [Civil War victor Abraham] Lincoln, Republicans are proud of the history of Juneteenth”.

She added that Mr Trump had “built a record of success for black Americans”.

How racist is Donald Trump:

He’s so racist that he plans on having one of his first campaign rallies on June 19th in Tulsa, OK.

If you don’t know — Do some research on #Juneteenth and the racial violence that took place in Oklahoma known as the Tulsa Race Massacre, 1921.

What else has been happening?

The death last month of Mr Floyd, an unarmed black man, after a policeman knelt on his neck in Minneapolis, Minnesota, has triggered weeks of protest and soul-searching about America’s racist past.

Mr Trump tweeted on Wednesday that military bases named for Confederate generals “have become part of a Great American heritage, a history of Winning, Victory and Freedom”.

Mr Trump’s remarks follow reports that top military officials were open to changes amid nationwide soul-searching after the death of George Floyd.

For many, symbols of the Confederacy evoke a racist past.

Confederate monuments have been a frequent target for protesters following George Floyd’s death.

On Wednesday night a statue of Jefferson Davis, the president of the Confederacy, was brought down by protesters in Richmond, Virginia.

Meanwhile, demonstrators in the nearby city of Portsmouth attacked a Confederate monument, tearing down four statues, according to local media reports.