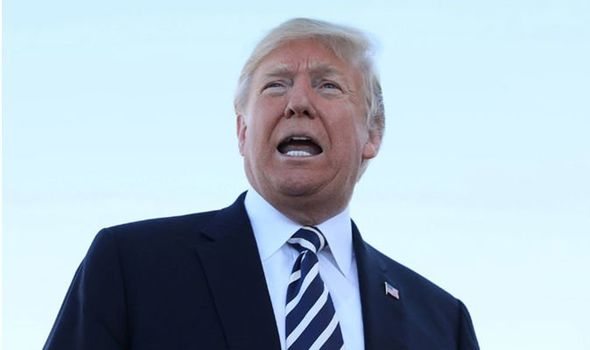 Mr Norpoth said that Mr Trump has a 91 percent chance of winning compared to his rival Mr Biden, who has just 9 percent of taking the US Presidential crown. The political scientist’s predictions, in a study released in March, is based on the so-called primary model, which analyses the previous six elections that have taken place in the US. Mr Norpoth has predicted the results of five US elections correctly with the only mistake being Al Gore’s defeat to George W Bush in 2000.

He said his predictions are based on the first party primaries and “the way in which the candidates develop in those first elections”.

The political scientist said this “is a very good indicator of what will happen in November”.

“When I saw that in New Hampshire Trump got 85 percent of the vote and that the closest opponent was Bill Weld with 10 percent, I was pretty sure what the model was going to predict.

“If Trump had won only 55 percent and one of the opponents had taken 40 percent, it is possible that he would not have predicted that Donald Trump would have a chance to win.

“People have forgotten how Joe Biden did in New Hampshire. It was terrible. He obtained 8.4 percent of the votes, which is inconceivable for a candidate with aspirations to be president.”

Many believe Mr Trump will not be able to win again, but he secured a bombshell victory in 2016 despite it seeming unlikely at the time.

Mr Trump has consistently trailed Mr Biden in national polls for months, partly because of widespread disapproval of his handling of the coronavirus.

Polls in the most competitive states, however, have shown a much closer race.

The pandemic, as well as an extraordinary level of enthusiasm, has prompted Americans to vote early in unprecedented numbers.

Already, more than 80 million votes have been cast either by post or in person, well over half the total number of votes in the entire 2016 election, according to the US Elections Project at the University of Florida.

The deluge of mail-in ballots makes it likely that the winner of several states, including major battlegrounds such as Pennsylvania and Wisconsin, will not be clear on Tuesday night, as election officials expect the vote-tallying to take days.

The deluge of mail-in ballots makes it likely that the winner of several states, including major battlegrounds such as Pennsylvania and Wisconsin, will not be clear on Tuesday night, as election officials expect the vote-tallying to take days.

Early voting data shows that far more Democrats have voted by mail, while Republicans are expected to turn out in greater numbers on Tuesday.

The final days of the campaign have continued to be dominated by the pandemic, which has killed some 229,000 people in the US and hammered the economy.

After overcoming his own COVID-19 infection, Mr Trump has maintained a frenetic pace, holding up to three rallies a day with thousands of attendees despite concerns the events could spread the virus.

While Mr Biden has held smaller events, including “drive-in” rallies where supporters remain in their cars for safety.