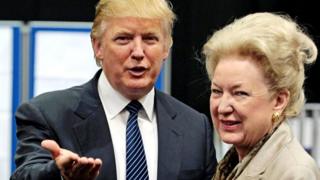 US President Donald Trump’s eldest sister, a former federal judge, has said her brother is a liar who “has no principles”, secret recordings reveal.

The critical remarks by Maryanne Trump Barry were recorded by her niece, Mary Trump, who last month published a book excoriating the president.

“His goddamned tweet and lying, oh my God,” Ms Barry is heard saying. “It’s the phoniness and this cruelty.”

Mary Trump said she had taped her aunt to protect herself from litigation.

Mr Trump responded to the latest revelations in a statement issued by the White House, saying: “Every day it’s something else, who cares.”

The recordings were first reported by The Washington Post, after which the Associated Press obtained them.

‘He had somebody take the exams’

In the secret recordings, Ms Barry criticises the Trump administration’s immigration policy, which has led to children being held at migrant detention centres at the border.

“All he wants to do is appeal to his base,” she said.

One of the claims made in Mary Trump’s memoir – Too Much and Never Enough: How My Family Created the World’s Most Dangerous Man – is that her uncle paid a friend to take a SAT test for him – a standardised exam which determines university placement.

Ms Barry refers to this in the recording, even suggesting that she remembers the name of the friend involved.

“He got into University of Pennsylvania because he had somebody take the exams,” she said.

Ms Barry has been supportive of her brother Donald and has previously said the two were close. She once told the story of how he had visited her every day she was in hospital following an operation.

“Once would have been enough – the duty call. That’s how love shows, when you go that extra yard.” She also said she “knew better even as a child than to even attempt to compete with Donald”.

A Superior Court judge in California has ordered the president to pay $44,100 (£34,000) to Stephanie Clifford, also known as Stormy Daniels.

The sum was awarded to cover her legal fees relating to a non-disclosure agreement over an alleged affair between the two.

Ms Daniels alleges that she and Mr Trump had sex in a hotel room in Lake Tahoe, a resort area between California and Nevada, in 2006.

The president denies the affair.

Ms Daniels said she had signed an agreement to keep quiet about her claims in exchange for $130,000 in October 2016, days before the presidential election.

In a court ruling published online, a judge ruled that despite the case being dismissed, Ms Daniels was “the prevailing party” in the dispute and therefore her costs should be covered.