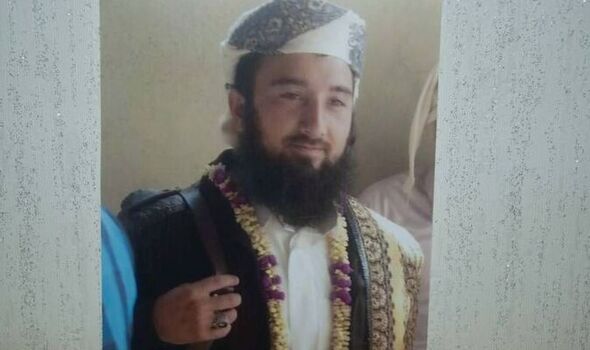 Luke Symons, 29, from Cardiff, has been held by the Houthi authorities in Yemen’s capital Sanaa since he was arrested at a security checkpoint in the southwestern city of Ta’iz on 4 April 2017. He has been detained without charge and has received no trial since his arrest. Mr Symons, who has family links to Yemen and travelled to the country in 2012, is currently in solitary confinement.

His relatives, who have been able to speak to him sporadically during his detention, say they are extremely concerned for his welfare after their most recent contact on January 31.

Speaking to Express.co.uk, Mr Symons’ grandfather Bob Cummings said the UK Government has not done enough to help his release despite frequent warnings that his situation was deteriorating rapidly.

Mr Cummings has requested an urgent meeting with Foreign Secretary Liz Truss to step up efforts to secure his release.

Mr Cummings said: “This Government is doing nothing. My grandson talked to me on the 31st. It was a very, very sad telephone conversation. He doesn’t see anybody, he doesn’t speak to anybody. He is in a cell on his own in solitary confinement. They’re treating him like an animal. The Government has been warned about this for many years.”

According to his family, Mr Symons appears to have been arrested for no other reason than having a British passport.

His relatives say he was falsely accused by the Houthis of spying for the Government and tortured to make him “confess” in the early days of his detainment, suffering violent beatings which left him with a broken arm.

Mr Symons’ wife, a Yemeni national who lives in the country with their young son, also raised concerns about his current state after visiting him last month.

Their hopes were raised in 2020 when there was a suggestion that Mr Symons could be released as part of a larger prisoner exchange with Houthi rebels.

Two US hostages held by the Houthis were released and repatriated during the prisoner swap.

However, Mr Symons was not released, although his relatives say no clear explanation was given as to why.

Mr Brennan told Express.co.uk: “It’s deeply disappointing that the UK Government doesn’t seem able to get its citizens held captive abroad released as effectively as other governments, for example, the US government.”

Mr Brennan, who has been working with Mr Symons’ family on the case since he was detained, repeated calls for the Foreign Secretary to prioritise Mr Symons’ release.

He said: “I think that the Government needs to ascertain through whatever means what it is exactly that the Houthis want and why they are still holding Luke in captivity.

“He’s just somebody caught in the middle of it, and I think the Foreign Secretary herself needs to focus on this case and push every diplomatic lever possible and every connection possible to try and get Luke released. I’m not entirely confident that that’s happened.”

Mr Cummings, who has been fighting for his grandson’s release since 2017, accused the Government of not “doing their job” and failing to support the family in their tireless efforts to bring him home.

Mr Cummings said: “Luke has done nothing wrong at all. He was arrested because he’s got a British passport. The people who’ve done wrong are the Government.”

He said he urgently wanted to meet with Ms Truss to raise questions about the handling of his grandson’s case.

Amnesty International, which is working alongside Mr Symons’ family on the case, has called on the Houthi authorities to immediately release him “unless he is charged with a recognisable crime.”

Sacha Deshmukh, Amnesty International UK’s CEO, said: “Luke has already endured almost five gruelling years behind bars and it’s long overdue that the Government properly engaged with his family and exerted sustained pressure on the Houthis to get him out of jail and back home to Cardiff.”

Mr Symons, who like many in the Cardiff area has family links to Yemen, travelled to the country in 2012.

He later met and married his wife, a Yemeni national. The couple attempted to flee the country when the international conflict erupted in 2014, travelling to neighbouring Djibouti where they were effectively forced back to Yemen by the Houthi-run Yemeni embassy.

Mr Symons and his wife, who was heavily pregnant at the time, were threatened with detention in a desert refugee camp unless they returned to Yemen.

Mr Symons also travelled to Addis Ababa in Ethiopia in 2015 with the help of his family, where he sought help from the British Consulate.

However, the UK authorities would not issue Mr Symons’ wife with a travel visa and the pair returned to Yemen. He was arrested soon after.

Mr Cummings said: “Luke’s story doesn’t begin in 2017, it begins in 2015 when the Government should have helped them and they didn’t. And that’s why Luke is where he is.”

An FCDO spokesperson said: “We know this is a difficult time for Luke Symons and his family. Our staff have been working intensively to secure Luke’s release.

“We remain in close touch with his family who we have been supporting since 2017.”