JOHANNESBURG (Reuters) – When Zinzi Lerefolo was sent home from her fee-paying girls’ school in a leafy Johannesburg suburb in March, her family set up a virtual classroom that allowed her to continue studying uninterrupted. 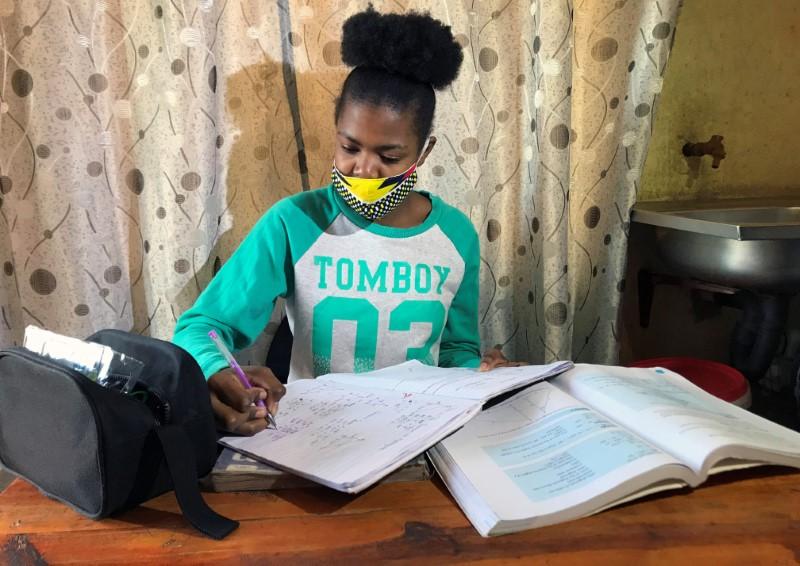 The 13-year-old has access to the internet and her school has the means to provide online teaching during the coronavirus lockdown.

For Phuti Ngoetjana, 14, it has been a different story.

Her state school has no resources to make the leap to cyberspace, and even if it did her family could not afford the data to access lessons in the one-room brick home in the east Johannesburg township of Tembisa where she lives.

The contrast between the black girls’ education during the pandemic has played out the world over.

In South Africa, it is especially acute and sensitive.

Although elite schools that were open only to white South Africans under apartheid are now integrated, most black pupils can’t afford them, and the country has struggled to bridge huge inequalities 26 years after the fall of white minority rule.

The country remains one of the world’s most economically divided, with the top 10% of households owning 71% of the wealth, according to World Bank data from 2018.

As schools prepare to partially re-open from Monday, the educational gap risks widening, and government ministers, teachers’ unions and parents are worried.

Those institutions built under apartheid in predominantly black townships and rural areas are the least well equipped to cope with the pandemic, with poor internet access, crowded classrooms and sparse amenities.

“COVID-19 has exposed the divide,” said Lerefolo’s father Simon, now a church pastor who escaped the townships to a top university in 1994 and who was able to pay for an elite education for his daughter.

“And it’s got us thinking: what have we done, us who are privileged, to reduce this divide?”

Schools were supposed to have resumed this week, but some teachers and unions argued it was not safe to do so until the government did more to ensure employees were safe from COVID-19.

Government officials have countered that a generation of school children risks losing a key part of their education, and the future opportunities it brings, even though the virus affects them far less than the sick and elderly.

In Western Cape, the opposition Democratic Alliance, which unlike the governing party is not beholden to unions, has defied orders from Basic Education Minister Angie Motshekga to delay opening for the last grades of primary and secondary school.

That’s despite the province accounting for two thirds of the country’s coronavirus cases.

Western Cape education chief Debbie Schafer said that schools there had taken the necessary precautions and she would not wait for another week to start. They re-opened on June 3.

An education department spokesman did not respond to a request for comment on this article.

Literacy tests carried out by the International Association for the Evaluation of Educational Achievement in 2016 found that 78% of South African pupils could not read for meaning by the age of 9 or 10, compared with 64% in Morocco and 4% in the United States.

Of 100 students who start school, 40-50 will pass their final high school exam, and 14 will go to university, Amnesty International said in a report in February.

“We still have … two South Africas living side by side,” said Nic Spaull, an education expert at Stellenbosch University in Western Cape province. “The two schooling systems have de-racialised, but you still have two systems.”

Under lockdown, these inequalities are being enlarged by disparities in digital access.

International Telecommunication Union data shows just 22% of households have a computer in South Africa, while 60% have internet access.

Since the end of apartheid, the governing African National Congress has brought electricity and piped water to millions and slashed poverty by a third.

Education has also improved: in the two decades since 1994, the number of black university graduates quadrupled to 48,600, Spaull said.

But for the poorest, the situation remains dire, which he put down in part to a failure to improve the quality of teachers – many of whom were themselves a product of apartheid education.

Zinzi Lerefolo has used the dining room in her spacious family home to attend classes held via videolink and do homework handed out using social media.

“It wasn’t really an issue going online,” she told Reuters, taking a break in her lounge with a view of the pool outside, before positioning her phone for a virtual art class.

About 35 km (20 miles) away, Ngoetjana sat in her parents’ single room – where they rest, eat, wash clothes and dishes – trying to study. Noise from traffic and people talking outside was ceaseless.

“The teachers didn’t give us any homework during this lockdown,” she said, looking up from her maths exercises. “I haven’t learned much because I’m not connected online.”

Most black South Africans depend on cash-strapped free schools like hers.

Under the former apartheid system, they were designed to provide only limited education: their role was to prepare black children for lower-paid jobs and keep them subservient to whites.

But the all-race democracy introduced in 1994 was supposed to change that.

Whether Ngoetjana’s school resumes on Monday, when classes are meant to restart for the crucial last years of primary and secondary school, is unclear.

Teachers’ unions are adamant they will not go back until all schools are equipped with masks, hand washing facilities and sanitiser.

That is a tall order given that, according to Spaull, more than a quarter of schools don’t have running water.

Many rural schools lack bathrooms – they use outdoor pit latrines instead. Dozens of school buildings were also vandalised or burned during the lockdown. 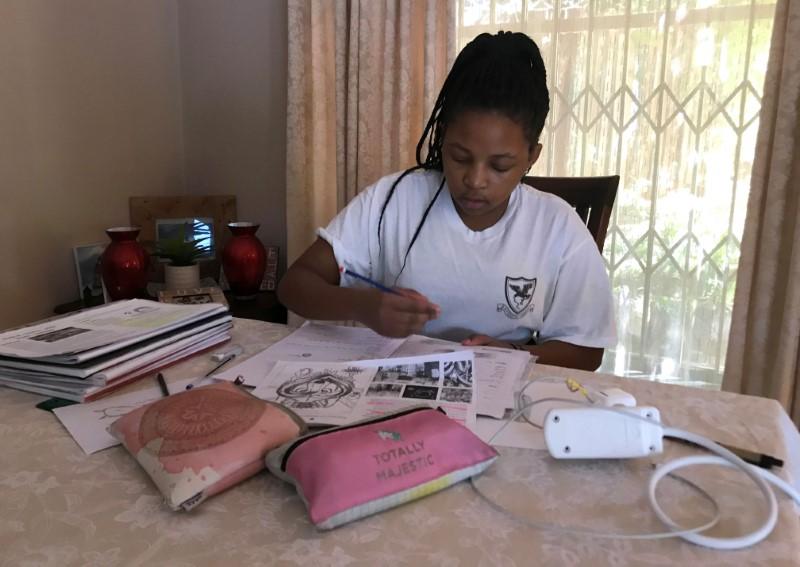 “The consequences are huge,” said Zama Mthunzi, of the Equal Education activist group. “Learners might not end up finishing or going to university … They’re going to be left behind very badly.”

Unlike Lerefolo, the fortunes of Ngoetjana’s father, Julius, have not changed much since apartheid ended. He said in some ways his daughter’s school reminded him of his: 60 kids jammed in a classroom making learning challenging.

“Things have improved but not enough,” he said.