The UK is forecast to once again bake in the spring sunshine with a high-pressure weather system bringing heat to Britain. Temperatures could soar to 23C by Thursday this week, with sunny skies on the cards for much of the UK.

April has already proven a hot month, provisionally ranking as the third-hottest in 361 years.

Now more hot weather is on the way, with sunny skies and warm weather due this coming week. 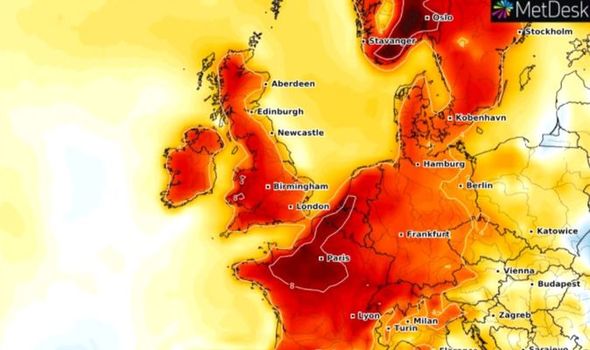 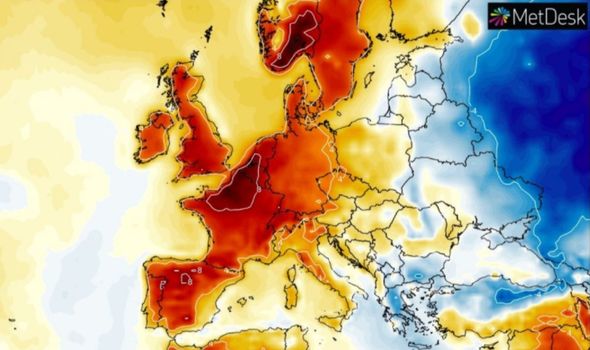 A 2,000-wide area of high-pressure which spans from Scandinavia to Ireland will bring highs of towards 20C on Monday.

However, this high pressure bubble could then warm up even further as we head into the middle of the week.

Met Office forecasts show highs of 22C to the south on Thursday, hotting up to 23C across the same area on Friday.

Brian Gaze, a forecaster from The Weather Outlook, said: “The hottest April since records began is on the cards in central England. 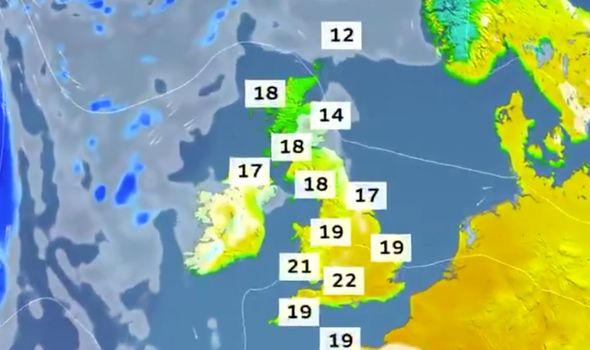 “It’s an awesome April, with temperatures over 10C above average at times, and 21-23C sunshine expected at times this week.”

In Netweather’s look at the week ahead the forecasters write: “High pressure is well in charge of the UK’s weather now and will stay that way through much of the upcoming week.

“It’ll be positioned to our northeast for a few days, so we’re going to have to get used to fresh easterly winds being a feature.”

Later in the week on Thursday and Friday conditions will start off grey, but cloud will soon burn off.

Netweather forecasts: “By this point too, winds will be much lighter, allowing temperatures to climb a touch higher again, with highs more widely troubling 20 to 21C or so.

“What we will need to look out for by this stage though, is the risk of some showers, perhaps also thunderstorms breaking out in the south and maybe especially the southwest of the country as pressure begins to fall.”

Bookmakers Ladbrokes make it odds-on the hottest day of the year is recorded this week.

With the sun shining once again in the UK, the bookmakers make it just 4/5 the mercury sets another new high-temperature record for 2020 during the next seven days.

Ladbrokes spokeswoman Jessica O’Reilly said: “The forecast looks stunning this week, and the scorching weather looks set to see the hottest day of the year.” 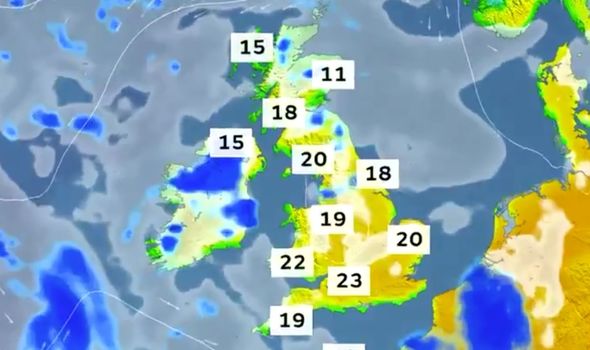 Turning chilly this evening with a dry and mostly clear night following.

Colder than last night with a touch of frost over Scotland. Turning windier.

Most areas fine, dry with almost unbroken sunshine, although perhaps cloudier at first in the far southwest of the UK, but even here brightening up.

Outlook for Tuesday to Thursday

Clear, sunny and increasingly warm for most by day, and clear but chilly by night.

The wind will ease and allow overnight mist and fog to become more prevalent.