The end of December looks set to be characterised by plunging temperatures, snowfall and downpours according to the latest weather maps. Forecasters even expect parts of the UK to be blanketed in up to 11 inches (29cm) of snow just before New Year’s Eve.

Weather maps by WXCharts show Scotland is set for significant snowfall on the evening of Tuesday December 29.

The snow depth chart shows the whole of Scotland covered in swathes of white, while some parts turn dark blue to indicate heavy snowfall.

The chart shows an area to the west of Aberdeen is set for up to 11 inches (29cm) of snow by 6pm.

Other parts can expect up to seven inches (18cm). 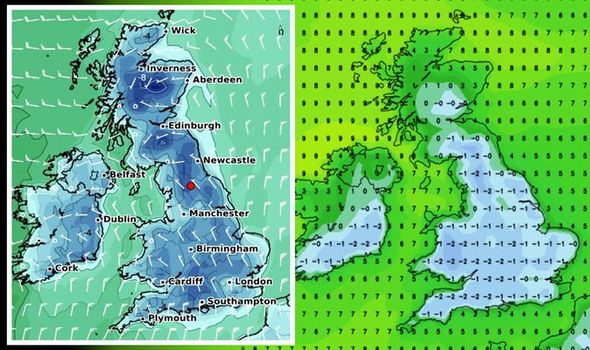 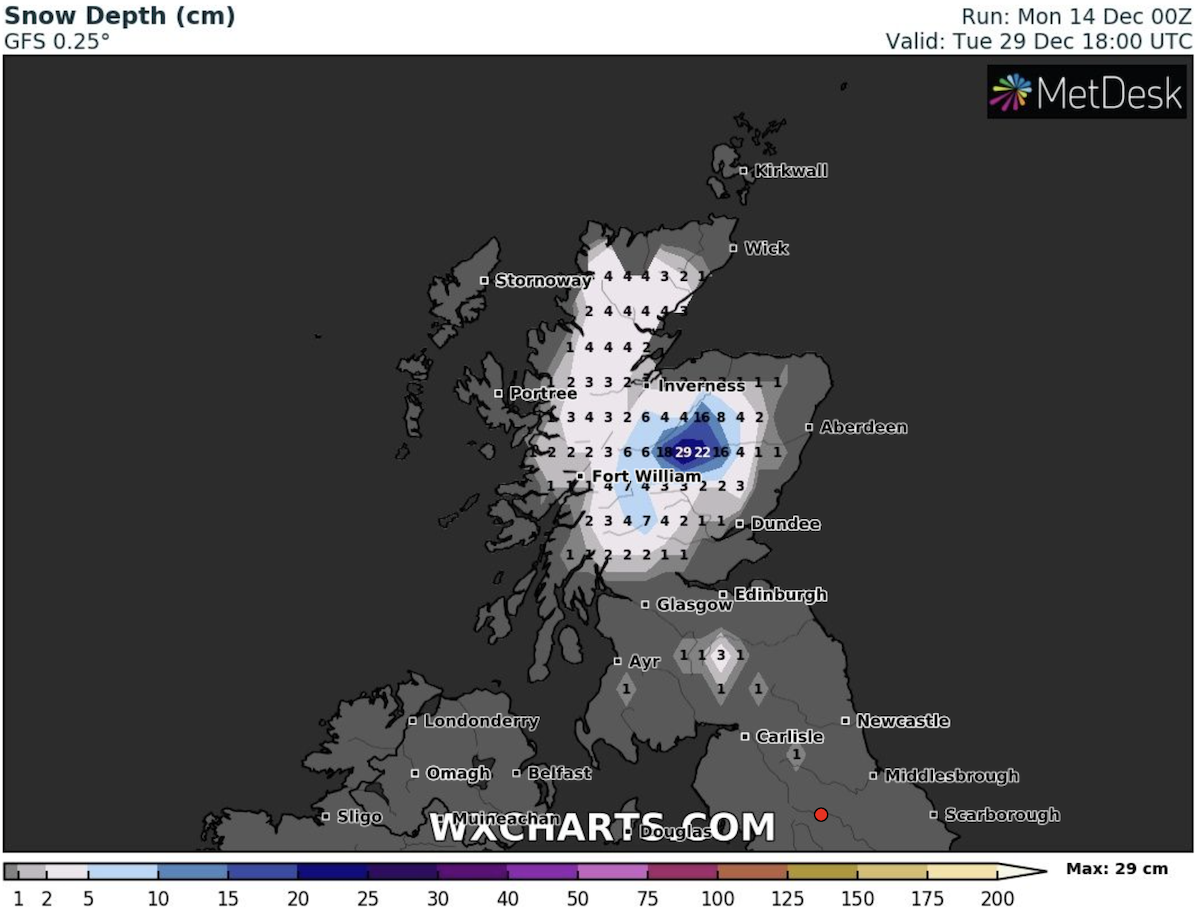 A second weather map by the forecasters shows the majority of Scotland turn purple, which indicates where snow is expected to fall.

While the snow appears to be contained to just Scotland, a small part of the north of England could also see a few flurries, according to the chart.

The snowy conditions look set to continue into the rest of the week in Scotland.

The rest of the UK looks set for icy conditions during this period, as cold temperatures are expected, particularly along the west coast. 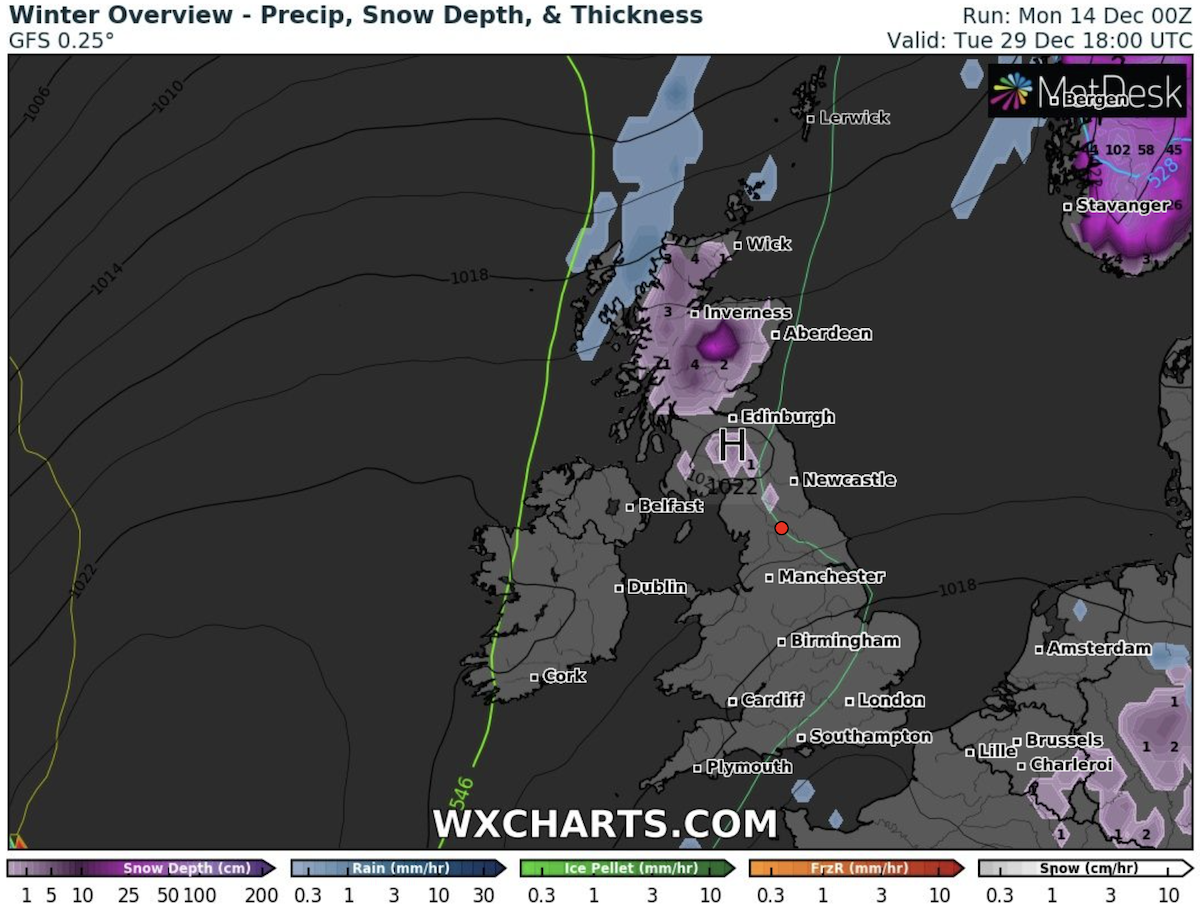 Another weather chart shows parts of the UK turn icy blue, indicating the drop in temperatures which could feel as low as -8C in parts, due to wind chill.

The worst of the icy conditions are expected a few days before however.

The chart shows all of England and Wales, as well as parts of southern Scotland turn blue as the mercury is expected to average between -1 and -2C at 12pm. 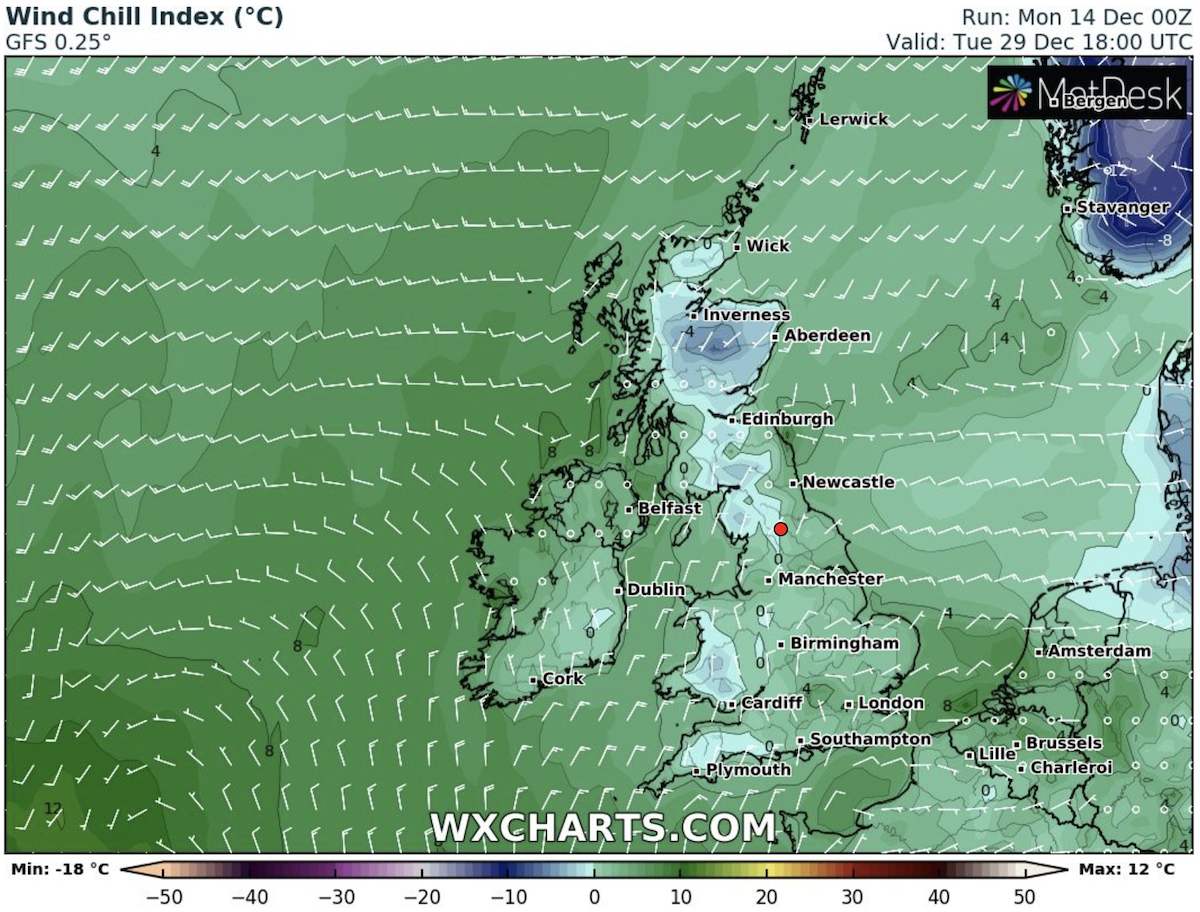 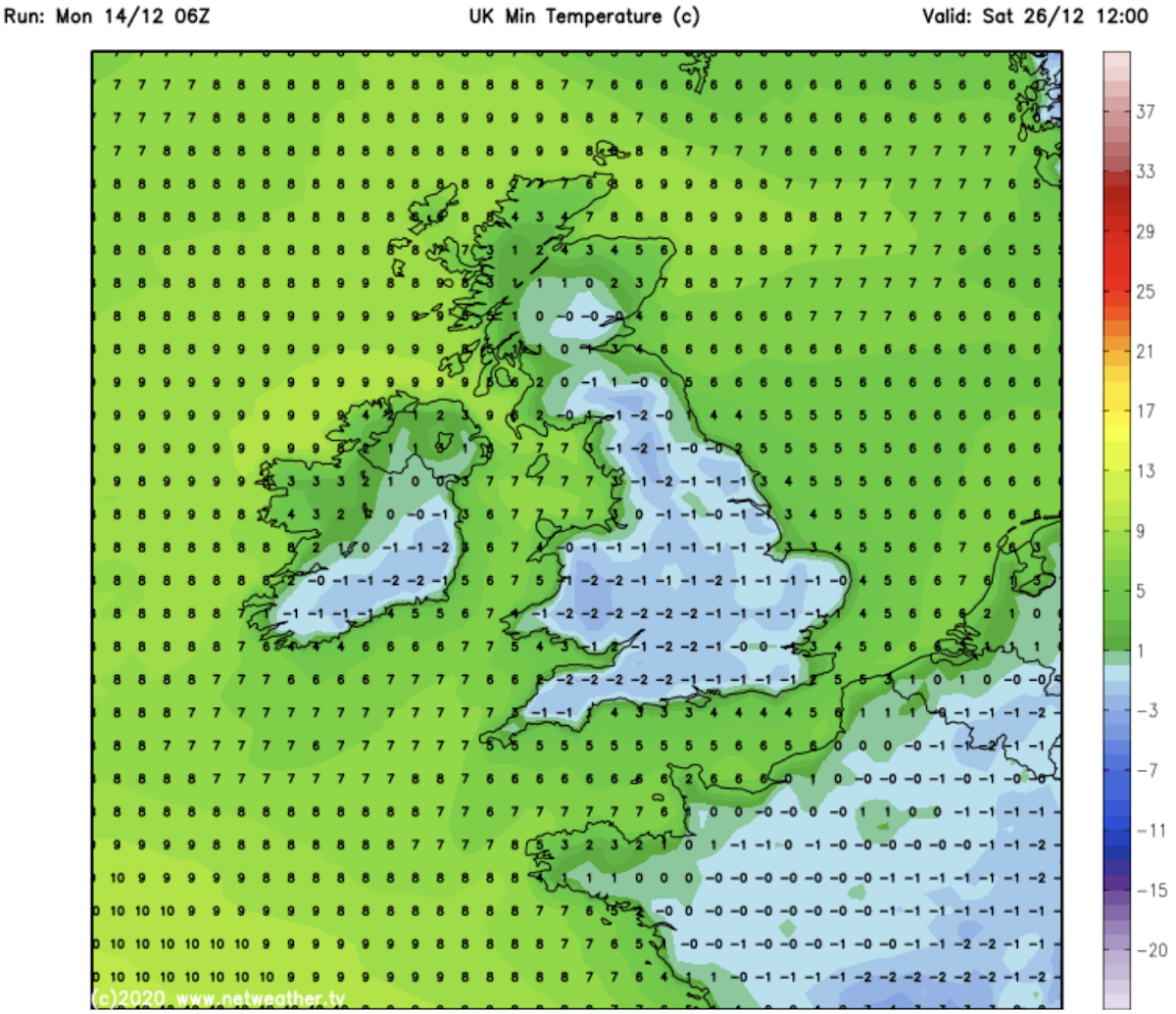 Similarly, WXChart forecasts temperatures could feel as low as -10C, when taking into account wind chill.

Snow is also expected on Sunday December 27 at 9am in north west Scotland, according to Netweather charts.

They said: “The final few days of 2020 are expected to stay rather unsettled. 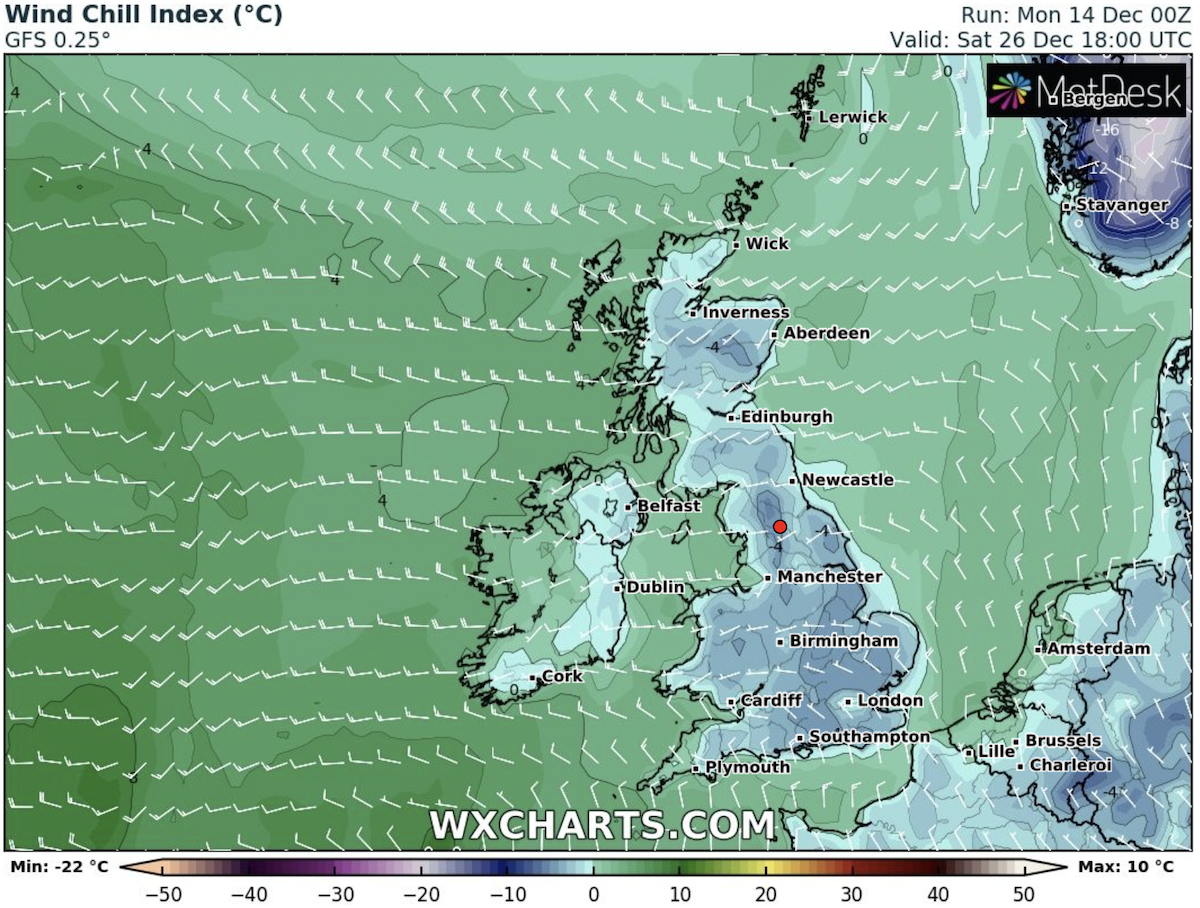 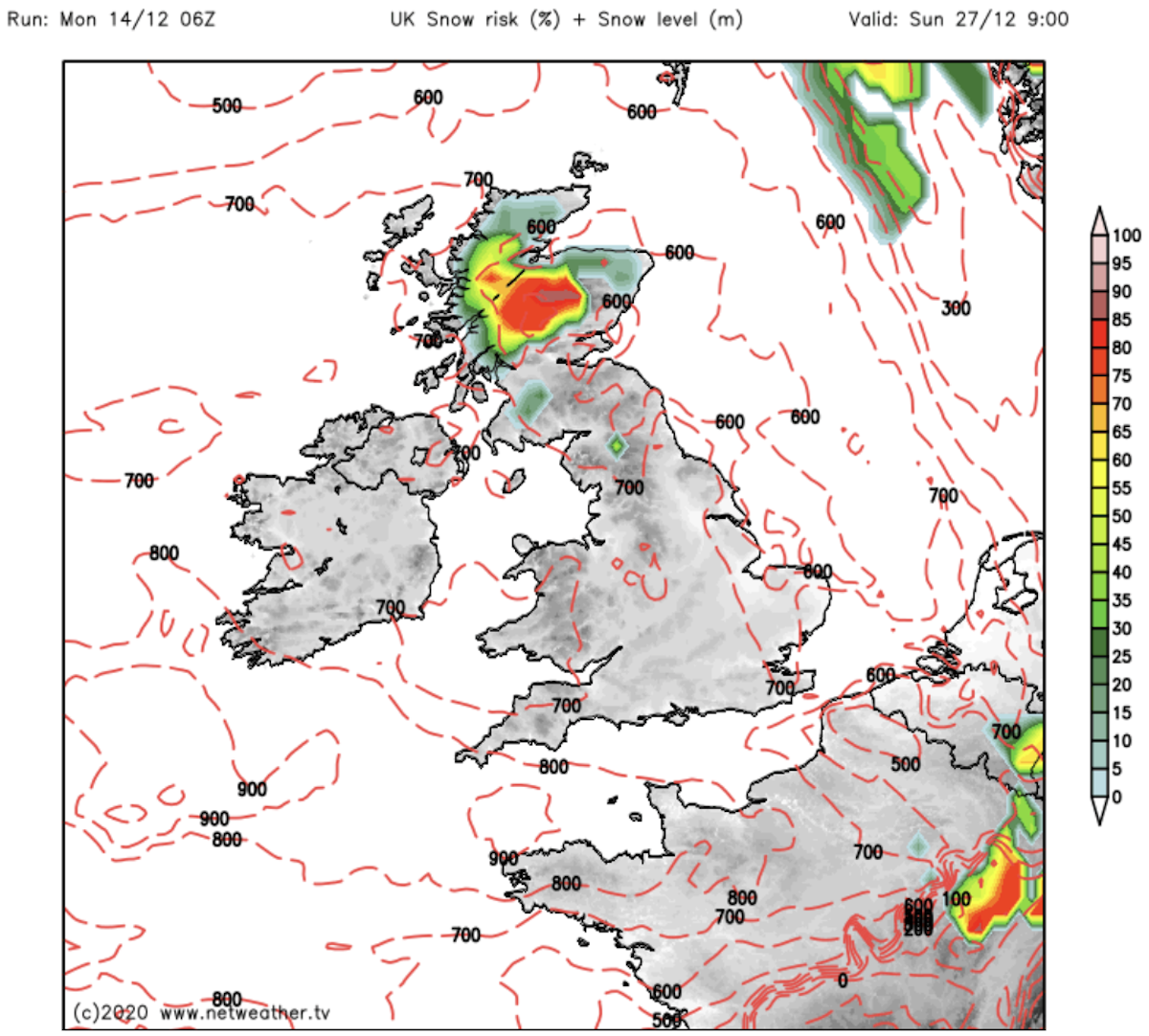 “If we are to see some cold air coming down from the north, then late December offers the best chance.

“High pressure will still be located to the north of the UK, near Iceland and Greenland, helping to keep the Atlantic low pressure track either overhead the UK or a bit to the south.

“This favours southern England and Wales to be wettest, a risk that snow could fall over some northern hills, while western Scotland could end up a drier than average.”

The Met Office expects the period from December 28 to be characterised by bouts of wind and rain.

They expect temperatures to be colder in northern areas.