Low pressure containing the remnants of Hurricane Epsilon is forecast to hit the south of Iceland this week and will drive a band of rain and wind eastwards across the UK. The unsettled conditions will linger until November, as WXCHARTS’ snow depth models have forecast a layer of snow to settle in central Scotland on November 8. Temperatures are also expected to plunge to a bitterly cold 0C in Scotland, with northern regions including Newcastle and Liverpool expected be hit with lows of 1C, according to the latest charts.

Met Office forecaster Grahame Madge said a sprinkling of snow is likely to settle in parts of Scotland in mid-November.

He told Express.co.uk: “There’s a signal for colder conditions with air coming in from the north during November.

“This will bring wintry showers, including a dusting of hill snow in Scotland.

“But this will not lead to widespread snow.” 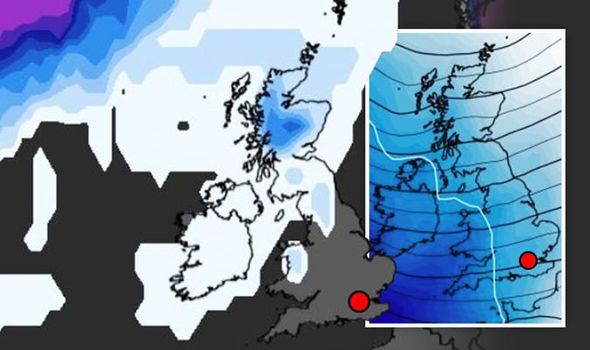 The forecast said: “Confidence becomes low towards the end of the month.

“However, the early part of the forecast period will likely see a gradual transition to a generally more unsettled pattern across the whole of the UK.

“Spells of rain and showers are likely, with these turning wintry over high ground in the north and northwest. 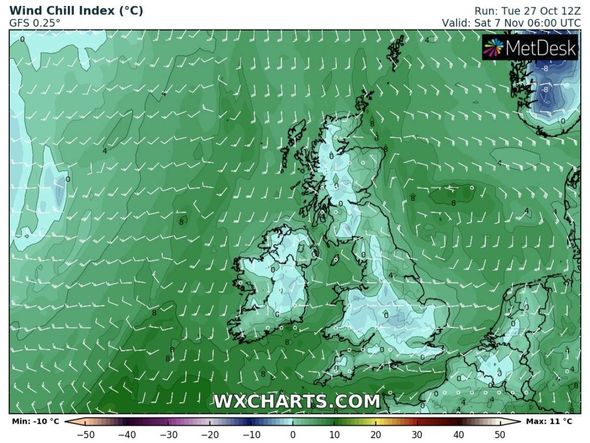 “There may also be the odd settled spell at times during this period, but they are likely to be short-lived.”

The forecast said: “Further north, the strong westerly jet stream over the North Atlantic will still be close by.

“This will feed in further frontal systems and areas of low pressure, but they will be less intense than the previous week and the chance of another ex-Hurricane moving close to Scotland is much lower. 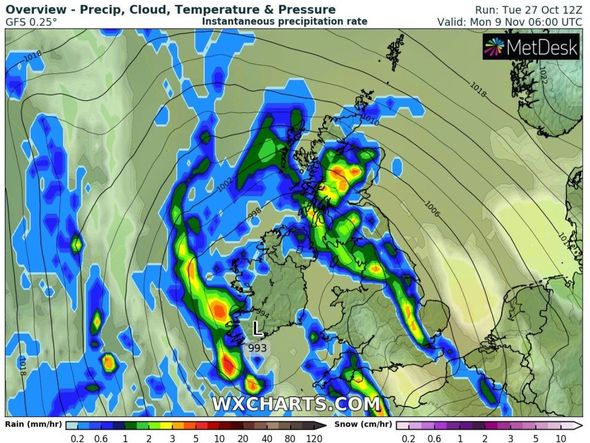 “Mild early in the week, but as low pressure areas shift east into Scandinavia and Germany later in the week, it will become a bit colder.

“The detail on how cold it will get towards the end of the week is very uncertain.

“But do prepare for the risk of frost and even some sleet and upland snow in the showers over Scotland.”

The forecast added the air from Scandinavia may continue throughout November. 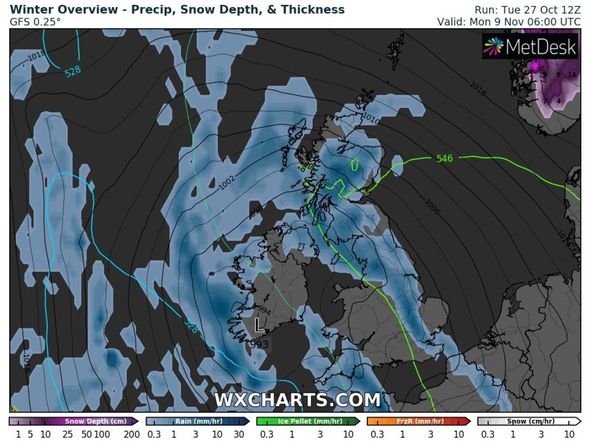 It said: “The most likely outcome for mid-November is that a ridge of high pressure over Scandinavia and central Europe should shift westwards to sit over England and Wales, allowing for a drier pattern of weather here”.

Snow may also settle later in November too, according to Netweather’s long-range forecast between November, between Monday 9 and Tuesday 17.

The forecast said: “This period will probably have frequent north-westerly winds and temperatures fluctuating around the long-term normal but overall on the cool side, and high pressure periodically ridging into the west and south. 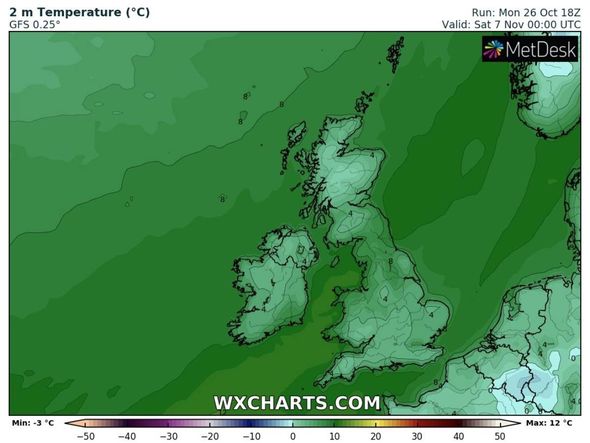 “There is a chance of some places, mainly on high ground and in the north, seeing their first sleet/snow of the season, but the confidence in this is currently low.

“The prevailing airflow may turn more westerly towards mid-November with the weather turning more unsettled generally.

“Temperatures are forecast to be a little below normal overall during this period, but not unusually so, with negative anomalies of around 1C in most parts of the country.

“Rainfall totals will probably be below normal in south-east Scotland and north-east England, but near normal in most other regions.”