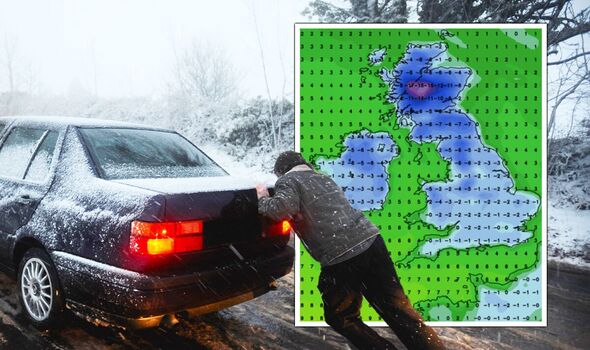 A surge of warm air from the south will give way to a near -20C Polar plunge next week as the nation once more battles the fury of the Arctic. With just 10 days to go, all eyes are on the festive snow forecast and whether Britain will see a White Christmas.

Meanwhile, forecasters warn northerly winds after the weekend will bring a bitter cold sleigh-ride to Christmas.

Exacta Weather’s James Madden said: “Despite the milder forecasts which have started to emerge over the past few days, we are seeing some significant trends to colder conditions winning out.

“Weather models have recently changed to suggest early indications of a prolonged mild spell later in the week were overcooked.

“There is now growing confidence in a continuation of very cold conditions, with any rise in temperatures likely to be minimal and restricted to the south.

“What is more likely is for a significant band of snow to sweep the country though the weekend.”

Heavy snow could arrive as soon as the end of this week with weather models revealing the growing risk of a holiday whiteout.

Mr Madden said: “The models are starting to grow in confidence for another bout of more widespread snow just around the corner.

“There is much more snow in the forecast for the remainder of December, with any mild blips likely to be temporary.

“The widespread snowfall could come as early as this weekend, or even earlier, and if these models firm up, parts of the country could see heavy snow by the end of the week.”

Chilly Britons will heave a sigh of relief this weekend with weather models showing temperatures in southern Britain rising into double figures.

Some temperature charts show milder temperatures holding out into the start of next week with highs of 13C and 14C possible in parts.

But the next plunge will flood the UK with bitter cold Arctic air pushing the mercury in parts to -17C.

Jim Dale, meteorologist for British Weather Services, said: “There are signs of a milder spell of weather in the run up to Christmas.

“However, winter is going to bite back, and we are back into a scenario of snow, sleet and hail.

“In terms of a White Christmas, the favourite areas are still to the north, but it is all still to play for.”

Changing forecasts have had not just meteorologists but bookies scratching their heads over festive snow.

Ladbrokes has once again slashed the odds on a White Christmas with London now showing promise.

Spokesman Alex Apati said: “Londoners dreaming of a White Christmas could well get their wish this year, if the latest odds are anything to go by.”

The Met Office predicts more cold and snow through the week although southern regions will turn slightly milder.

A spokesman said: “On Wednesday, patchy snow in the southwest corner of England should ease, and many southern areas will be dry and slightly less cold.

“There will be snow showers for some exposed north-eastern areas but elsewhere some cold winter sunshine.

“We can expect wintry showers in the north on Thursday, and it will be dry in the south with some freezing fog patches.

“There are also likely to be wintry showers in northern areas on Friday and some longer spells on Saturday.”