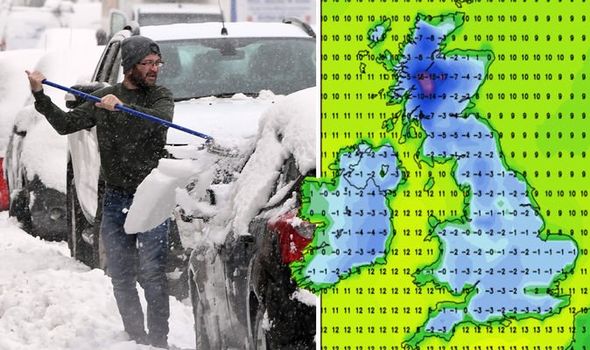 Snow threatens to blanket swathes of the UK in the run up to the festive season amid warnings a ‘little ice age’ may dish up one of the coldest and snowiest winters in a decade.

Scourging Polar gales forecast before the end of the month could send temperatures plummeting in parts of northern Britain to -17C.

James Madden, forecaster for Exacta Weather, said: “Cold conditions in the coming days will pave the way for a number of widespread snow events from the last week of November into the start of December.

“During this period, it is going to turn markedly colder, and with a drop in solar activity, we are looking at a potential mini ice age winter.”

Britons are warned to dig out winter coats with the mercury forecast to nosedive after the weekend.

Some weather models reveal high pressure pulling bitter winds in from the north and the northeast, according to the Met Office.

A complex chain of events triggered by unusually strong rainfall over the Indian Ocean will jolt the jet stream in the UK triggering the cold snap, meteorologists warn.

Met Office meteorologist Alex Deakin said: “There may be some snow in places next week.

“Enhanced rainfall over the Indian Ocean has the potential to impact on the jet stream which is meandering above the Himalayas.

“This could force the jet stream further south bringing cold air southwards and a meeting relatively warm system across the western Pacific.”

A huge burst of energy will erupt from this shift firing up the jet stream as it moves closer to the UK, he explained.

He said: “It is a big change that we are pretty sure will happen next week.

“The European weather model generates a high-pressure system closer to the UK and that opens the door to the northerly winds and quite a cold spell.”

Lurking and ready to pounce closer to the festive season is a gigantic storm system churning ocean waters around the Arctic region.

It threatens to pull another plume of freezing air across the UK sending ground temperatures to -17C in parts of the country.

Weather charts show the storm sweeping south-eastwards from Iceland and Greenland across Britain during the last week of November.

Early winter snow is now in the sights of several forecasters who agree a cold snap is imminent.

Bitter ‘northerly outbreaks’ threaten to put the nation on ice next week, according to Netweather.

A spokesman said: “Confidence is low on how cold these will be, but there is significant potential for wintry showers to affect northern and eastern parts of the UK at some point … especially near North Sea coasts, and a small chance of more widespread snowfalls occurring if Atlantic depressions move into the cold air.”

Bookies have started taking bets on the coldest winter on record with Coral slashing the odds to 4/5.

Spokesman Harry Aitkenhead said: “We have had a warm November so far by usual standards, but a big freeze is coming, and it won’t be here for the short term.

“We now make this winter odds on to enter the record books as the coldest we have ever had.”

Cold weather is likely to stretch into December and through the month as the chances of a white Christmas continue to build.

Mr Madden added: “December currently looks like carrying over the cold from this month.

“Later in the month there is the chance of a colder north to north-easterly influence which could persist for several weeks.”

Temperatures next week will fall widely to freezing or below while snow charts reveal Scotland, and eastern, northern and central Britain to be most at risk.