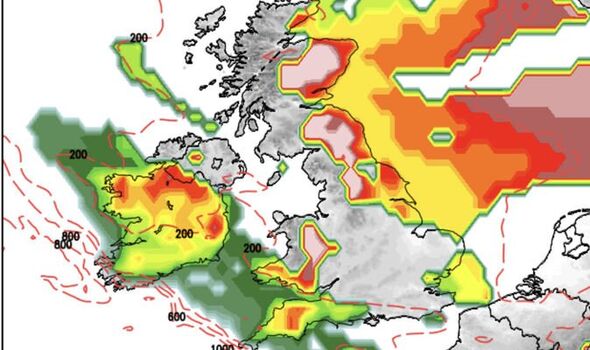 Forecasters are nervously watching a stratospheric warming event which threatens to shift and split the Polar Vortex – a dome of circulating air over the Arctic.

The phenomenon sees temperatures rise over the Arctic and was, in part, the driver for the devastating 2018 Beast from the East.

Weather models reveal a wall of snow ahead of mid-March ploughing into Britain from the east as temperatures plummet to minus double-figures.

James Madden, forecaster for Exacta Weather, said: “Wintry weather and snow is likely to continue into March, particularly in parts of the north and west.

“Some of these outbreaks could become more widespread reaching further south.

“The potential is there for another snowy blast.”

In the meantime, a conveyor belt of Atlantic low-pressure systems brushing northern Britain threatens a deluge of torrential rain.

A deep Atlantic cyclone about to sweep past Scotland on its way to Norway mid-week will whip up further foul weather.

Jim Dale, meteorologist for British Weather Services, said: “We are not out of winter’s clutches.

“This week will continue to be affected by waving fronts coming largely into the southwest.

“Another frontal system comes across the country mid-week, and with mixing of cold air with milder, moist air coming in, there is the potential for more heavy rain, and by the end of the week some parts of the country will have seen two or three inches.

“There is a risk that some of this will fall as snow if reaches far north enough.”

Meteorologists warn warming of the stratosphere above the Arctic could displace the Polar Vortex.

“Though not a major sudden stratospheric warming, looks sufficient to displace/split vortex temporarily.”

Today marks the start of the meteorological spring–which runs from the first of the month–although the weather has different ideas.

John Hammond, meteorologist for weathertrending, warned Britain may be ‘looking to the east’ for a bitter early spring blast.

It will follow a topsy turvy week of weather which will dish up rain and chill winds ahead of the weekend, he added.

He said: “On Thursday and Friday weather fronts will push in from the Atlantic bringing disorganised rain, and these could stall somewhere across the country.

“Behind this is chilly air, and this may persist into next week, so we will have to look to the east for our weather.

“As we look ahead through this week, some days will look like spring, others decidedly like winter.”

Netweather’s Jo Farrow warned an easterly wind will bring a winter chill with further rain hitting southern regions ahead of the weekend.

She said: “A waving band of rain…will also pull an easterly wind for Tuesday night and Wednesday.

“The rain is patchy by Wednesday over Wales and England, reaching further north later in the day.

“This is then joined by another frontal band from the west on Thursday.”

Bookies have slashed the odds on a March freeze with Coral offering 2-1 from 5-1 on a record cold month.

“We have slashed the odds on this month going into the record books as the coldest March we have ever endured.”