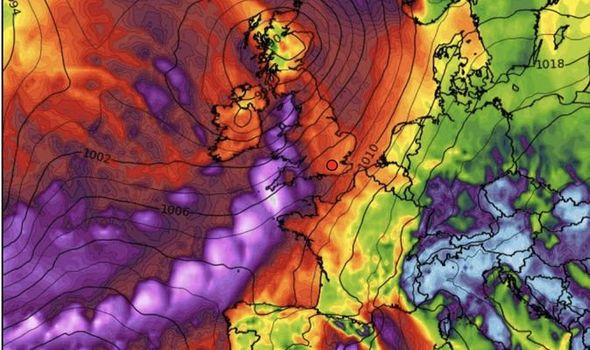 Cyclonic Atlantic weather systems will unleash fierce winds and heavy downpours from Sunday as the jet swoops over Britain.

Mild air dragged in from the south next week will nudge temperatures in parts of the country into double figures although it will arrive laden with rain.

Further swerves in the jet stream in the days before Christmas threaten to unlock the gates to a plume of ‘intensely frigid air’ from the North Pole.

Long-range forecasters have put the UK on alert for ‘major snow’ events during the final third of December.

Exacta Weather’s James Madden said: “There is a growing chance that parts of the country could see some heavy falls of lasting snow in the week before Christmas.

“This will be driven by a shift in the jet stream which is forecast to veer southwards through the next 10 days bringing much colder conditions.

“One or two major snow events are not out of the question in some parts while elsewhere there will be a risk of cold rain and sheet ice.”

Despite the mild run up to mid-month, a sharp plunge in temperatures may return a below-average monthly average, he warned. 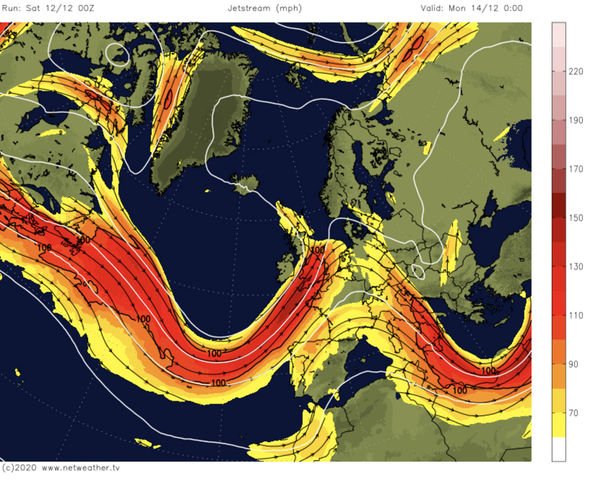 Those heading away on the roads for Christmas should be careful of dense freezing fog and icy roads he added.

He said: “Widespread overnight frosts may become a dominant feature through the end of December.

“In regions where there is snowfall with wind snowstorm type events may be a risk.

“The predicted statistics for this period should bring colder than average temperatures in the Mean Central England Temperature range and above-average snowfall.”

The warnings come as Britons brace for a stormy few days ahead as churning cyclones power in from the Atlantic.

The thundering jet stream will pull ‘energetic weather systems’ into Britain through the coming days, according to John Hammond of Weathertrending.com.

The jet, travelling at a speed upwards of 150mph, shows signs of then shifting southwards to open the floodgates to a freezing plume from the Arctic. 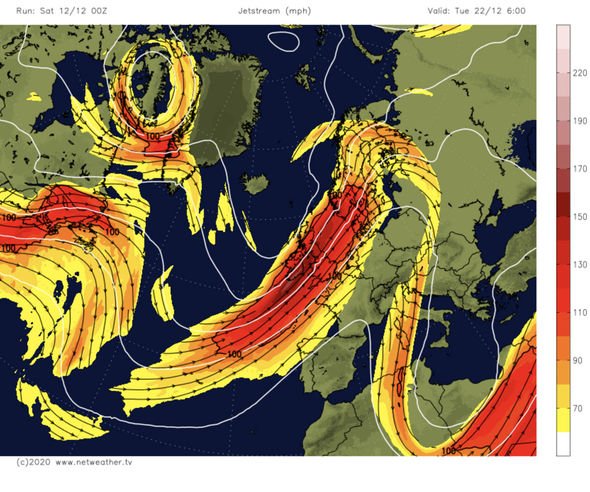 Mr Hammond said: “Atlantic weather systems are gradually introducing milder air – a process that will continue through this weekend and into next week.

“With higher temperatures will come some wetter and windier weather as the jet stream powers energetic weather systems across the UK.

“Across the North Pole, high pressure is showing signs of pushing cold air further south, which will in turn have knock-on effect on the track of the jet stream.

“For the time being, this intensely frigid arctic air will remain distant from our shores.

“But, as the jet stream begins to edge southwards again, there’ll be a cooling trend as the Winter Solstice approaches.”

Unsettled conditions will start to pick up through the next 24 hours as low-pressure barrels in from the Atlantic.

Wind and rain threaten to hold out through much of next week before the weather settles down at the weekend.

Amy Hodgson, senior meteorologist for The Weather Company (IBM), said: “The next area of low pressure approaches to the north-west on Sunday bringing further rainy and breezy conditions. 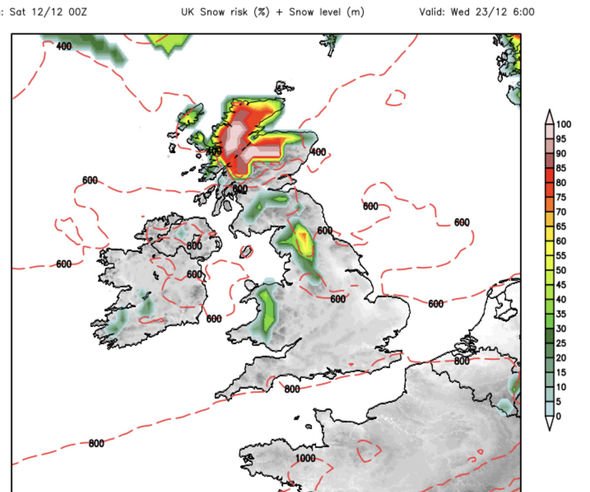 “Next week, temperatures are expected to remain above average for the time of year with the unsettled Atlantic flow bringing further spells of wet and windy weather under low pressure.

“There are indications of drier and more settled weather returning through the end of next week as high pressure begins to build from the east.”

Weatheronline’s Alexi Venerus added: “It is an unsettled week ahead as Atlantic low pressure pushes across all areas bringing heavy rain and strong winds at times. Temperatures will feel milder too, especially in the south.”

Bookmakers have continued to slash the odds for Christmas snow as the forecasts point towards a festive chill.

Coral is offering 5-1 on a White Christmas with Edinburgh and Newcastle most likely to see a flurry.

Spokesman Harry Aitkenhead said: “Everybody’s dreaming of a White Christmas once again and our betting shows that it’s certainly a possibility around the UK. Edinburgh is the most likely according to our odds, whilst London is a 5-1 chance.”

The Met Office warned of wind and rain to come later this weekend although it will feel milder next week.

Meteorologist Alex Deakin said: “Another weather system is waiting to move in and that will bring a band of rain swinging across the country on Sunday and the winds will be picking up.

“It’s going to turn wet and increasingly windy and it’s going to be a bit warmer by the weekend.”