According to meteorologist Alex Deakin it will be cool first thing on Saturday morning with the possibility of fog and mist. Mr Deakin added that it would warm up in the afternoon with sunshine in most areas.

He said: “Generally turning dry for most and clear spells as well.

“Will turn a little cool across western Scotland and Northern Ireland.

“Temperatures here dropping down into single figures, still quite warm across East Anglia and the south east and it could just turn a little misty here.

“One or two fog patches are possible through the early hours of Saturday morning. 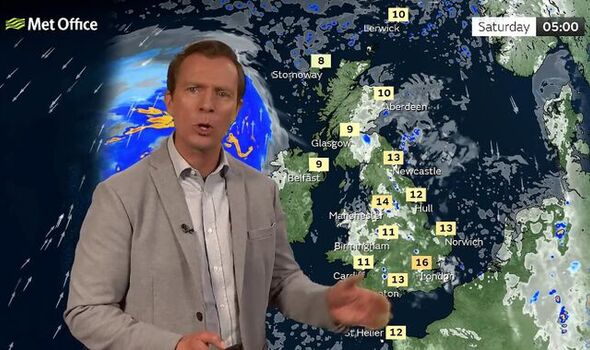 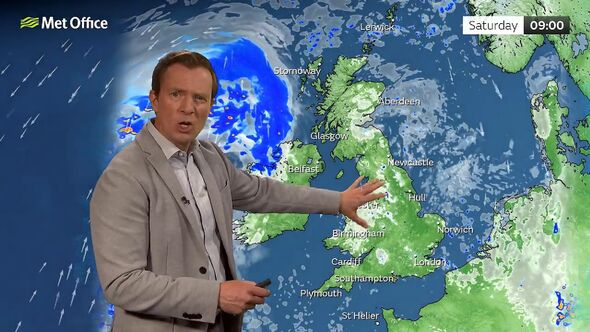 “Bear that in mind if you’re heading away early for the bank holiday, but that mist and fog should clear away pretty quickly on Saturday morning.

“It’s not going to be a completely dry day.

“There will still be one or two showers mostly scattered in the morning over northern England, perhaps southern Scotland.

“Through the day we may see one or two more over part of the Midlands and southern England, but they’re going to be very well scattered. 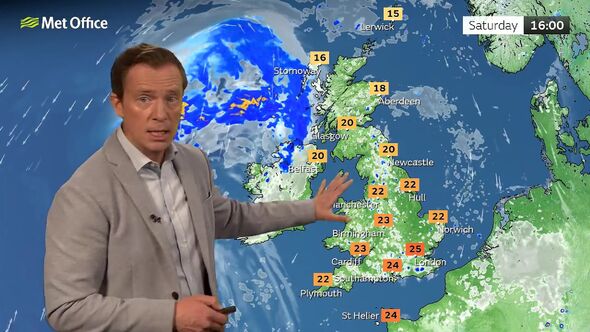 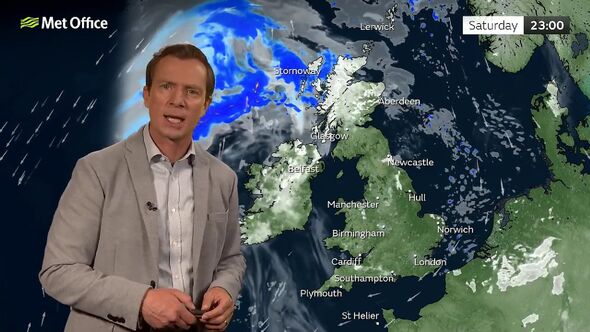 “I suspect most places will stay dry and with some sunny spells, pretty pleasant if you’re out in that sunshine as well.

“With temperatures climbing quite widely into the low to mid twenties across England and Wales, a little cooler further north and west, but even here still feeling fine in the sunshine.

“Now that sunshine will be disappearing steadily over northern parts of Northern Ireland and northwest Scotland as that weather front just tries to push in that will eventually bring some patchy rain, especially on the north coast of Northern Ireland into parts of the Highlands, the western isles through Saturday evening.

“Elsewhere though most of us are having a fine Saturday night, clear spells, temperatures mostly holding up into double figures.” 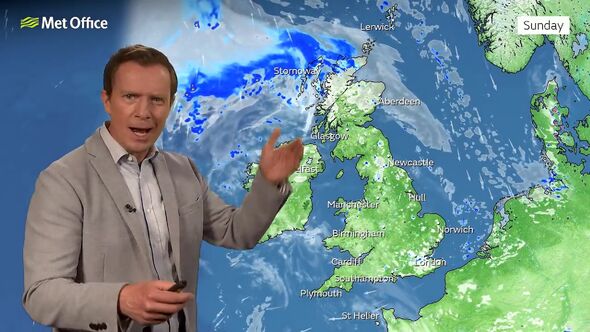 Mr Deakin added that Sunday would mostly see a continuation of the “dry” and “fine” weather.

He said: “Onto Sunday’s details and for the vast majority dry fine with sunny spells.

“Quite cloudy across northern Scotland that weather front still around, a little bit of rain at times over the Highlands, the western islands,but it should tend to peter out.

“Still the chance of one or two showers over northern England, eastern Scotland.

“But again most places won’t see those, dry fine with some sunshine.

“Notice the breeze just started to pick up along the south coast, that’s going to be a feature of the weather through Sunday and especially during Monday.

“Temperatures though for most on Sunday a little bit higher, widely over 20 Celsius, low twenties for northern England.”