A huge 500-mile ‘Portuguese pulse’ of warm air will sweep in across the UK and initially bring highs of up to 14C in parts of the country. Weather maps show air blowing from southern Europe, while the Met Office has forecast temperatures to climb from just 8C to 14C by Wednesday. Even northeastern cities such as Newcastle, York and Newtown could experience some of the warmest weather.

Temperatures could reportedly even rise as high as 21C over the coming weeks, triggering a flurry of bets at bookmakers this spring could be the hottest on record.

The warmer weather will be a huge boost to Britain, as the country desperately fights the accelerating coronavirus outbreak.

Britons have been told to remain indoors and stay two metres apart from anyone they come into contact with.

But the warm weather will enable them to enjoy time in the garden, especially with young children being at home from schools closing. 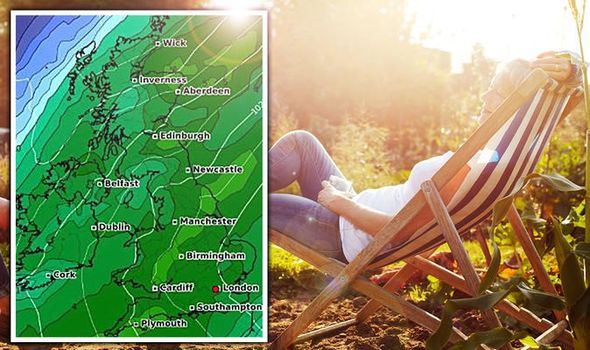 The warmer weather till trigger an end to several miserable weeks of torrential rain and huge flooding across the , as well as sub-zero cold snaps.

Ex-BBC and Met Office forecaster John Hammond from weathertrending said “the taps have turned off” following a deluge of rain during the winter.

He added: “We will tap into air from further south in Europe through the early part of the week, with daytime temperatures rising.

“Drier continental winds are now blowing across the UK. The ‘taps’ have been turned off after wet and windy westerlies plagued us through winter.”

STV weather presenter Sean Batty said: “Stay positive, British Summer Time is on the way with lighter nights and 20C is more achievable in weeks ahead.”

A Met Office forecaster said: “It looks fine and dry for many from Sunday.

“Dry and settled conditions should dominate through the end of March and into early April, bringing plenty of sunny spells across the UK.

“Rain could spread to north-western areas at times.”

But the warmer weather will still be tinged with some negative news, particularly for northern parts of Scotland.

Yellow weather warnings are in place for parts of the country, with up to 5mm of rain forecast over the coming days.

These warnings are in place from 6pm this evening until midday on Wednesday, with the Met Office warning of persistent rain.

Yellow weather warnings from the Met Office state flooding of some homes and businesses is likely.

They also warn spray and flooding on roads could extend journey times, while there could also be some power cuts.