Storm Bella is set to sweep across the UK today, bringing yet more strong gales and heavy rain after several parts of England saw severe flooding. The Met Office has issued a handful of weather alerts in response to the storm, which has been spotted surging towards Britain on several weather maps.

One map shows the ferocious storm approaching the UK from the north west.

The chart, from Magicseaweed, characterises the storm by a large mass of red and purple.

The eye of the storm is shown by an area of dark grey, with small areas indicating where the unsettled conditions are heading.

A second weather map from WXCharts shows the UK turn dark purple as Storm Bella moves across the whole of the UK by 6pm on Sunday. 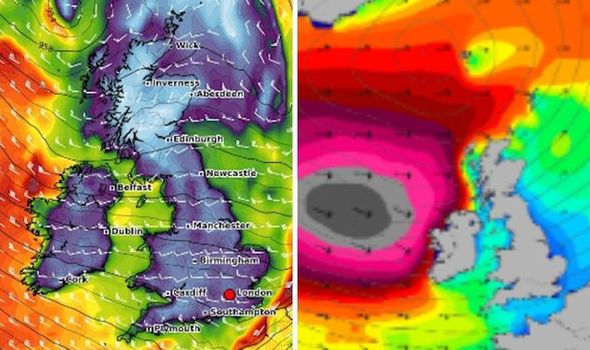 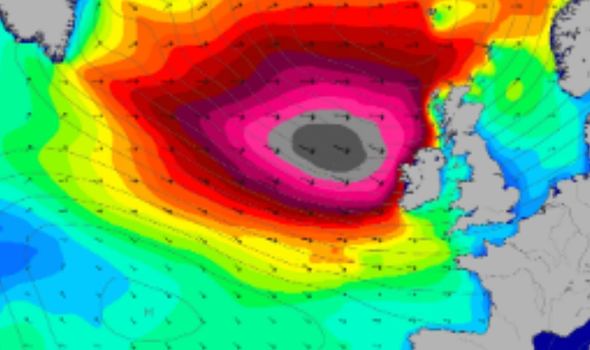 Another weather chart from the forecasters show the UK turn a deep red as the storm sweeps over Britain at 12pm on Sunday.

According to the chart the south of England looks set to see the worst of the tumultuous conditions.

The Met Office has predicted 15-25mm of rain will fall in Wales and southwest England today, reaching 40-60mm over some hills.

Bouts of heavy rain are also expected to affect wester and southern regions. 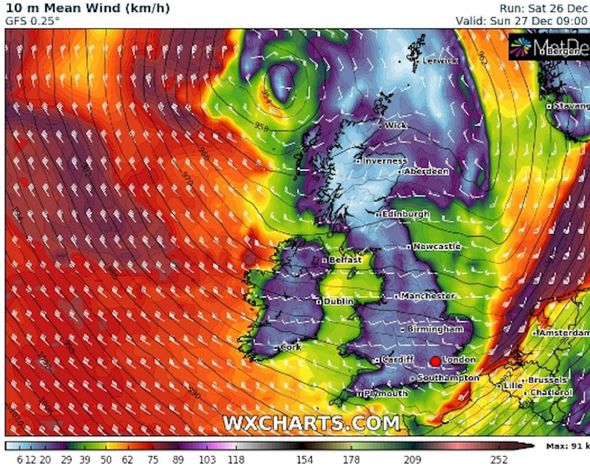 The Met Office have issued a number of weather warnings in response to Storm Bella.

An amber warning for wind covers parts of Wales and southern England from 8pm today to 9am on Sunday.

The severe weather warning has been issued as gusts of up to 60-70mph are forecast in exposed coastal locations.

The Met Office said the strong winds could cause damage to buildings, with warns flying debris “could lead to injuries or danger to life”. 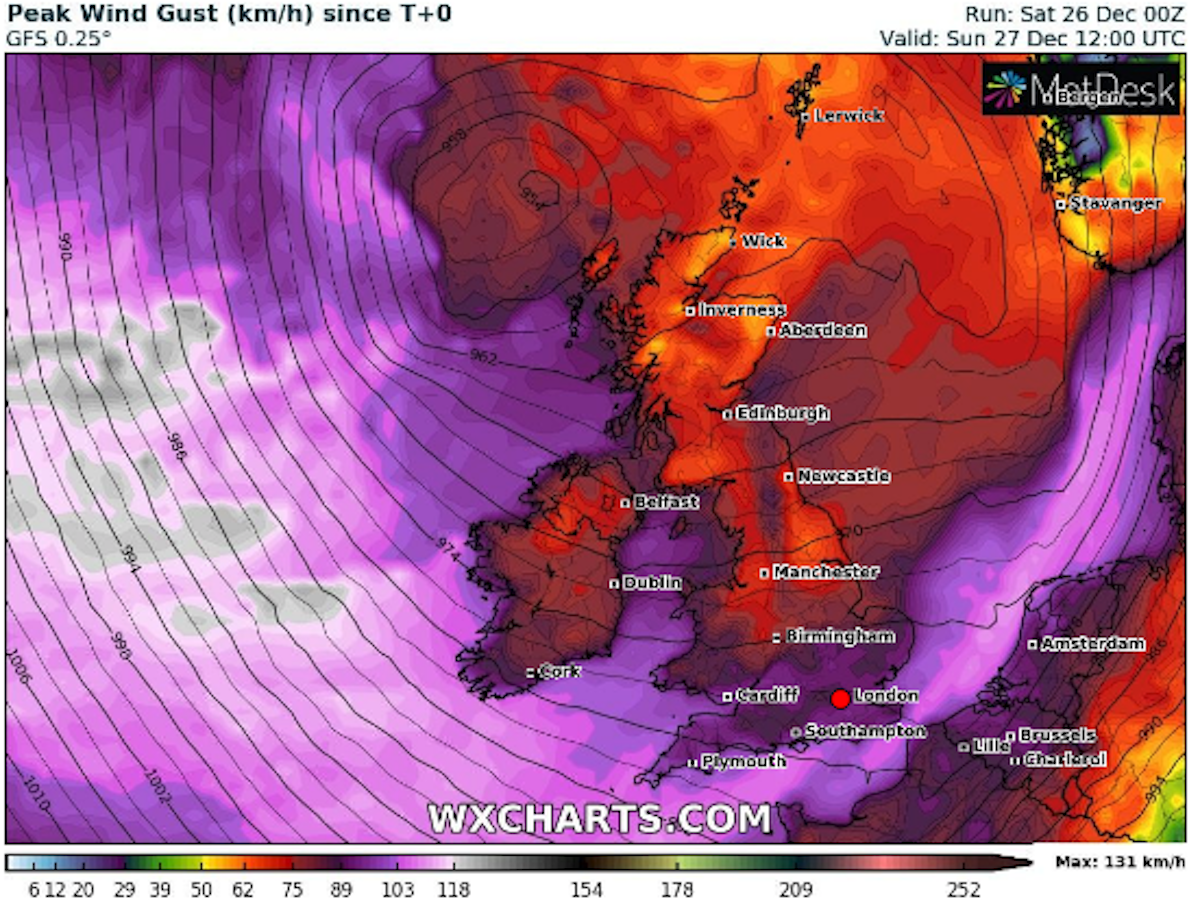 They add: “Injuries and danger to life is likely from large waves and beach material being thrown onto coastal roads, sea fronts and properties.”

“Very strong winds will impact much of England and Wales, with particularly strong gusts on south west facing coasts. 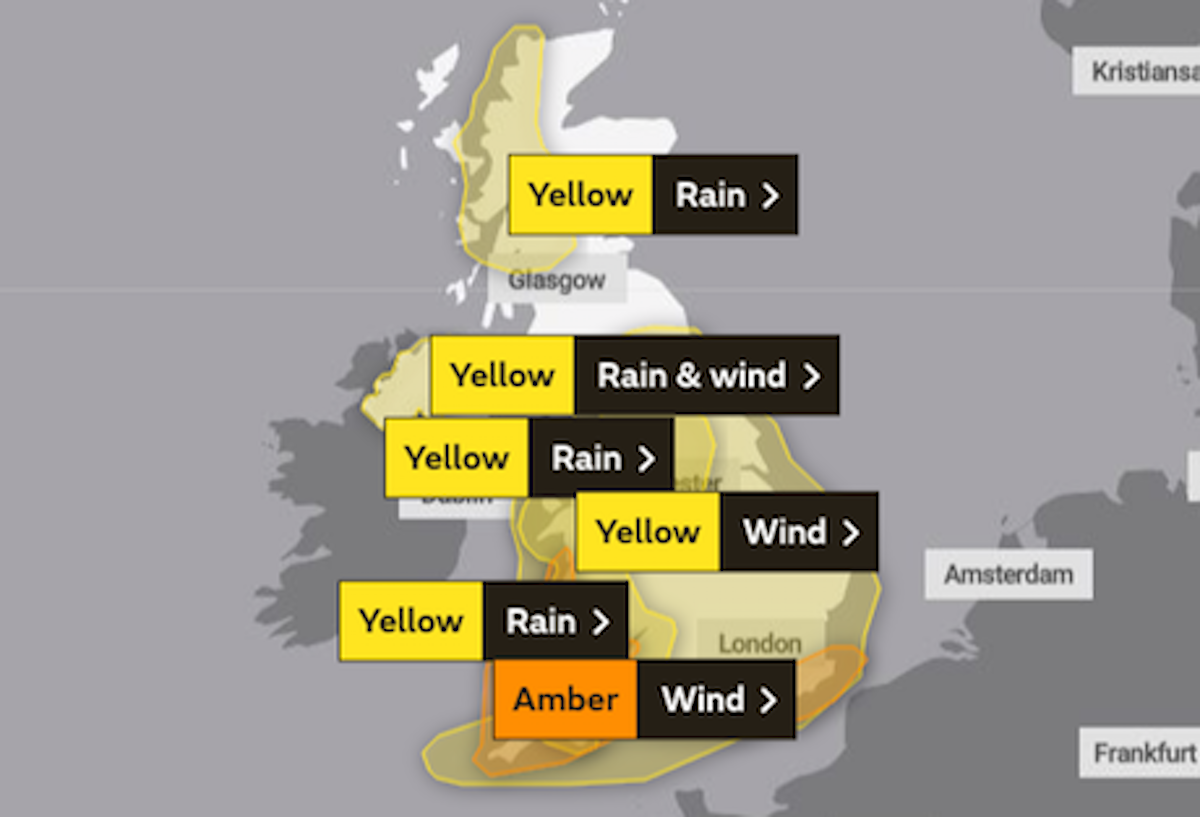 “Heavy rain will also move in from the north, with heavy downpours through the afternoon in Scotland and Northern Ireland moving south across England and Wales overnight.

“This will be a notable change from the calmer conditions over Christmas Eve and Christmas Day so take extra care and stay up to date with the latest forecast.”

On Christmas Day, residents in more than 1,300 homes along the River Great Ouse in Bedfordshire were asked to leave by police after the river burst its banks, causing bridges and roads to be flooded.

The widespread rainfall which caused the flooding has passed, but the Environment Agency (EA) has warned that a significant flood risk remains – with river levels in Bedfordshire and Cambridgeshire remaining significantly high.