A short spell with temperatures of up to 15C will bask the UK before the arrival of more unsettled weather. It comes after the Met Office warned that a new series of forecasts showed that extremes of downpours and high temperatures will “exceed the extreme conditions that we have already experienced in the UK”.

The agency added that these extremes will be record-braking and will present “increasing challenges on health, infrastructure and services”.

Met Office meteorologist Aidan McGivern said: “Rain then showers for many of us on Friday, or if you’re in the east of England, showers and then rain and it’ll be blustery whether you’ve got the rain or the showers.

“Some showers overnight for southwestern parts of England, in particular some heavy downpours even the odd rumble of thunder and those showers track northeastwards across much of England overnight and a few patches of rain elsewhere.

“But the main event comes along into western Scotland and Northern Ireland by around midnight with some heavy rain and the winds picking up that will keep things frost free in the northwest, but a touch of frost is possible in some sheltered clearer spots elsewhere. 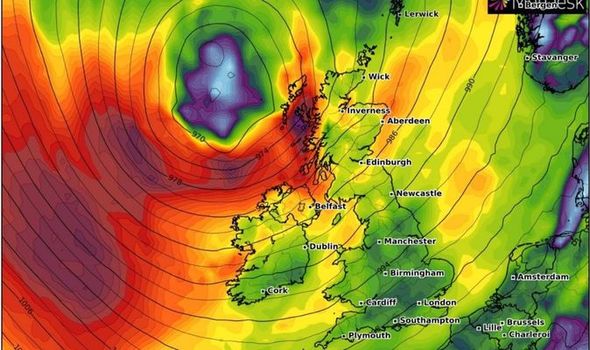 “Here are the weather fronts that are arriving into the south into the northwest during Thursday night and we start the day with some unsettled weather across western Britain.

“It soon clears Northern Ireland but heavy rain and strong winds affecting much of Scotland first thing, spreading into western England and wales during the morning.

“For the afternoon after lunch really it’s western Britain that brightens up with some heavy downpours but central and eastern England get the cloud and fizzling outbreaks of rain.

However, at this point there are no heavy downpours. 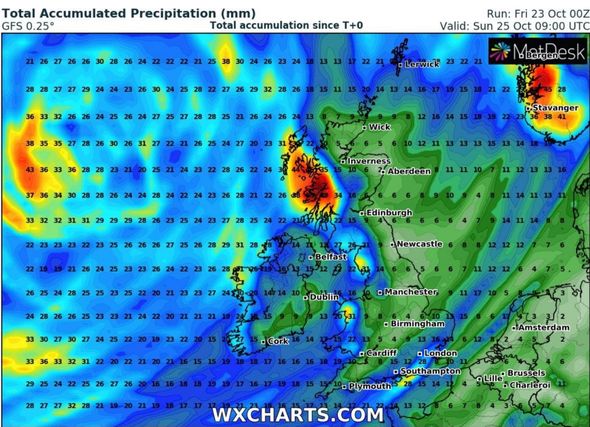 The temperatures will reach 16C in some areas, but will fall much lower in western areas with blustery winds.

“Clear spells for many for a time at least but yet another weather front moving in from the Atlantic to keep things changeable and unsettled.

“And heavy rain and strong winds pushing back into western Scotland and Northern Ireland by the start of Saturday, so it’s a repeating cycle.” 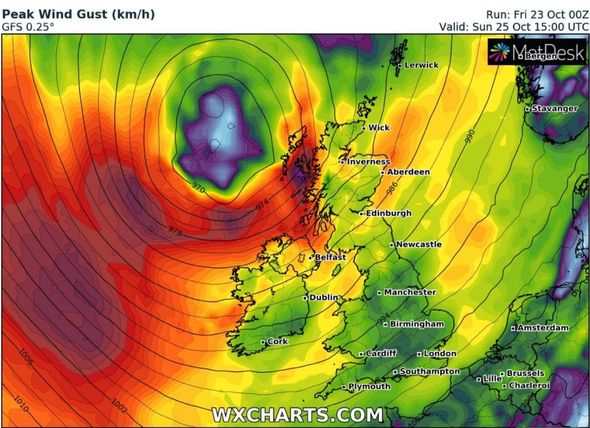 Next week, temperatures are forecast to get closer to 20C, according to Met Office forecaster Grahame Madge.

Speaking to Express.co.uk, Mr Madge said: “Next week will be what meteorologists call a very mobile set up as a disruptive system from the Atlantic weather will impact the UK from tomorrow.

“It will be mild for this time of year as warmer air will hit further south.

“Average temperatures next week will be 17C at the most on Tuesday, with London seeing highs of 15C during the week. 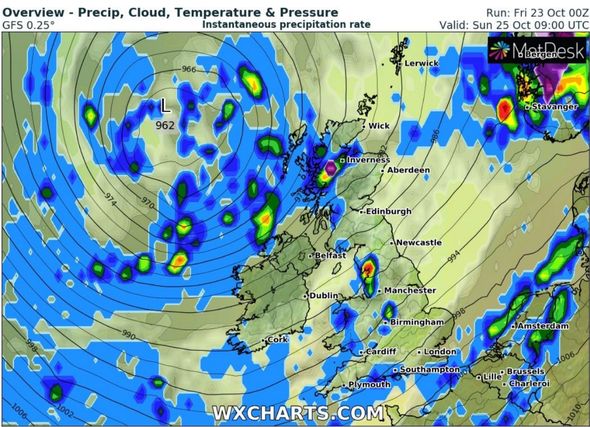 “At the end of October, temperatures in the UK will average 13C.”

Mr Madge said forecasters are currently observing the post-tropical lifecycle of Hurricane Epsilon as it is forecasted to merge with a trough and create a powerful non-tropical storm in the North Atlantic.

He told Express.co.uk: “The storm is very far out right now but we cannot take that as certainty as sometimes they can push towards the UK.

“Forecasters will be keeping an eye on where the storm will be next week as it pushes deep low pressure across the North Atlantic.”