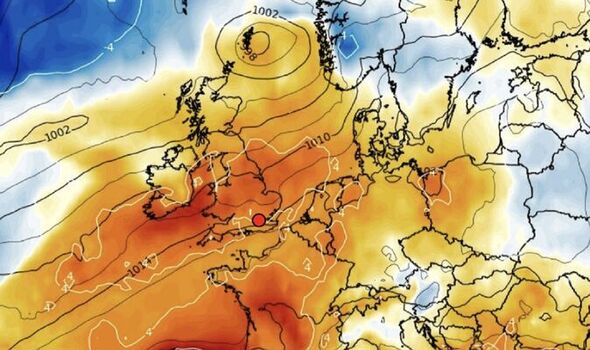 Meteorologists earlier this year raised the alarm about an unusually active Atlantic hurricane season gearing up to give the UK a battering. Britain lies directly in the firing line for ex-hurricanes and tropical storms which after forming off the east coast of America swerve eastwards across the Atlantic.

As the nation faces yet another heatwave to kick-start August, experts warn brutally hot weather may coincide with an ex-tropical barrage.

John Hammond, meteorologist for Weathertrending, said: “As well as the ever-present threat of heat returning at short notice from the Continent, we’re reaching the time of year when another factor could play a part.

“The hurricane season is expected to be a particularly active one this year.

“If, and when, one of these bundles of energy escapes the tropics and interacts with the jet stream, we could well see yet another twist to our weather towards the latter part of summer.”

Before summer, the Met Office warned a particularly active Atlantic hurricane system could strike this autumn.

Met Office tropical cyclone expert Julian Heming said: “What is interesting this year is that the forecasts issued by many different agencies are all indicating an above-average season.

“As they are all pointing in the same direction this gives us a higher degree of confidence.”

It comes amid warnings Britain is once again about to heat up as weekend weather models reveal 30C-plus temperatures. 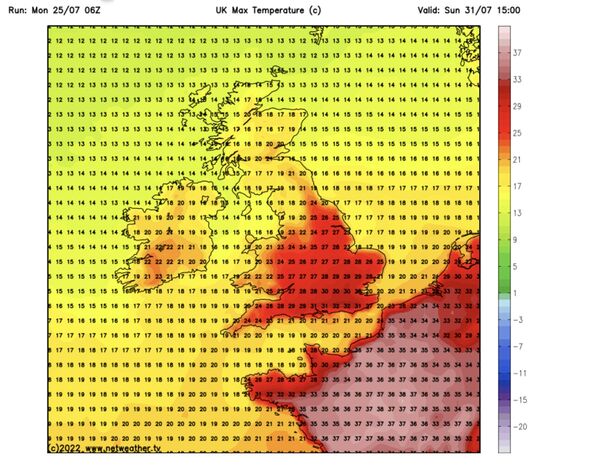 Southern England could hit 32C on Sunday with highs of 28C forecast across central and eastern England.

Scotland and the north will stay cooler with northerly winds keeping the mercury in the mid-teens to low-20Cs.

Some weather models have once again touted the possibility of another mega-blaze pushing thermometers to 40C.

These predictions, however, are thought to be exaggerated by computers veering towards warmer outcomes.

But thermometers will rocket towards the end of the week with no sign of adequate rain to quench parched parks and grasslands.

Mr Hammond said: “There is a lot of uncertainty over the weekend as weather fronts pushing down from the northwest.

“We could see some wet weather arriving but whether that reaches the southeast at all through is another matter.

“Temperatures will be on the up again as we approach the weekend.”

Stifling hot weather, which threatens to hold out through August, threatens to drive a spate of thunderstorms.

While experts say a repeat of last week is highly unlikely, further crippling heatwaves are likely. 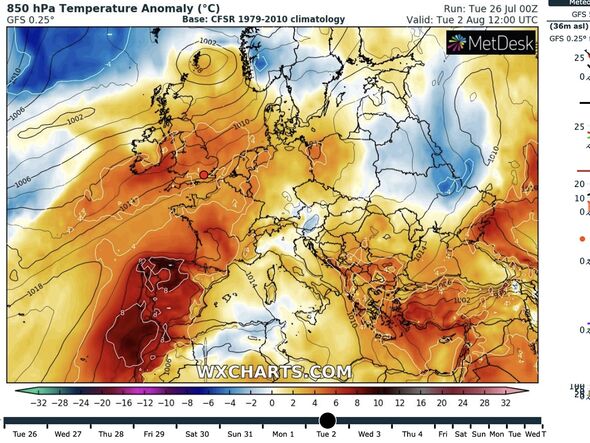 James Madden, forecaster for Exacta Weather, said: “We are not out of the woods when it comes to the risk of another burst of very hot weather which could set in again as early as the start of August.

“It must be noted that there could be some thundery downpours to accompany the heat, and these could become commonplace throughout August.

“The main focus, though, is the likelihood of further very warm weather, much of which should be extensive periods of summer heat to enjoy, but there remains the risk of temperatures once again reaching the high-30Cs.

“It remains to be seen whether we edge towards the recent record heat.”

Bookies have slashed the odds on a torrential deluge hitting before the next heatwave with Ladbrokes offering 2-1 from 3-1 on this week seeing the wettest day of the year.

Spokesman Alex Apati said: “Last week set the bar on the weather front but the latest odds suggest more records could be broken over the next few days, for all the wrong reasons this time.” 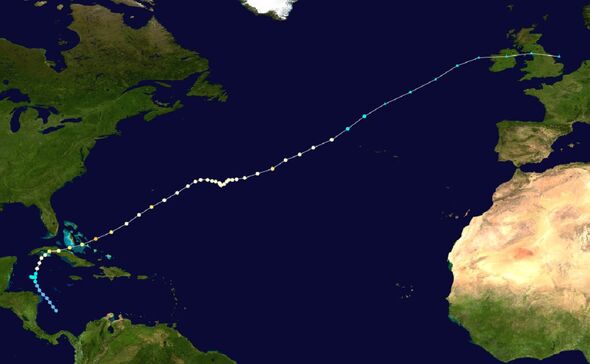 Former hurricanes which have struck the UK include the devastating St Jude Day storm which hit in October 2013 and killed at least 17 people.

Ex-hurricane Ophelia reached the UK in October 2017, driving winds of 90mph almost 30 years to the day after the Great Storm of 1987.

In October 1996 Hurricane Lili formed off the coast of Central America before the remnants hit Britain unleashing some of the strongest winds for 30 years.