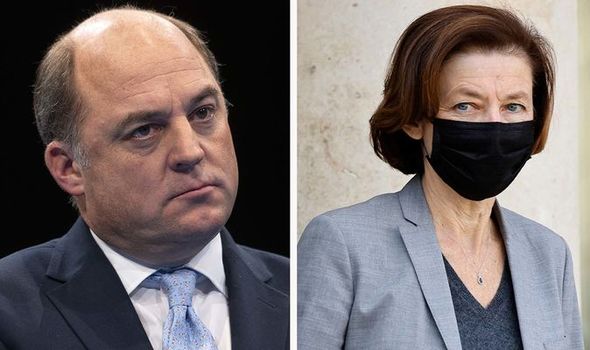 The Sunday Express revealed how furious France cancelled both the planned meeting scheduled for September 23 and a major defence summit hosted by the Franco-British Council after the announcement of the Aukus defence pact between Australia, Britain and the US.

Britain has spent the last month steadily reasserting its commitment to European allies Eastern Europe and Italy amid growing unease over French President Emmanuel Macron’s attempt to forge so-called European strategic autonomy, which some fear will undermine the role of Nato.

A reminder of Britain’s role as a “good European neighbour” has also helped, sources say, during the thorny negotiations over the Northern Ireland Protocol.

Next week’s Nato’s defence ministers’ meeting will discuss the possibility of renewed Russian aggression, following the build-up of tens of thousands of troops along Ukraine’s border in April.

A senior MoD source said: “While it may be the case that our commitments in Europe are being leveraged in view of the current situation with France, it is important to remember that things like the Joint Expeditionary Force ‑ a UK-led initiative involving nine Northern European nations ‑ were already well established.

“They continue to show how we continue to prioritise the high north and the Euro-Atlantic.”

The two-pronged effort has been led by Foreign Secretary Liz Truss, who earlier this month signed a joint statement with Estonia, Latvia and Lithuania reaffirming a commitment to security cooperation in the Baltic region, and agreeing to foster closer economic links.

She also met Italian counterpart Luigi di Maio to announce a new agreement with to boost exports and investment between both countries, where economic ties are already worth £38bn

An FCDO source said: “Closer diplomatic, economic and defence ties with the Baltic states are a crucial part of Liz’s plan to advance and defend liberty and democracy. She talks about them being at the frontier of freedom and sees them as important allies in challenging malign actors and reinforcing the importance of Nato.

“Closer links with the Baltic Three will be a feature of her tenure as Foreign Secretary.”

Last night James Rogers, of the Council of Geostrategy, said: “What the government is trying to do is to link up with countries that are basically unhappy with the way France is trying to take control of the EU policy making process and to represent their interests.

“France will frame this as a UK attempt to undermine EU cohesiveness, but it’s no such thing. These countries feel their interests are being overlooked by Paris.”