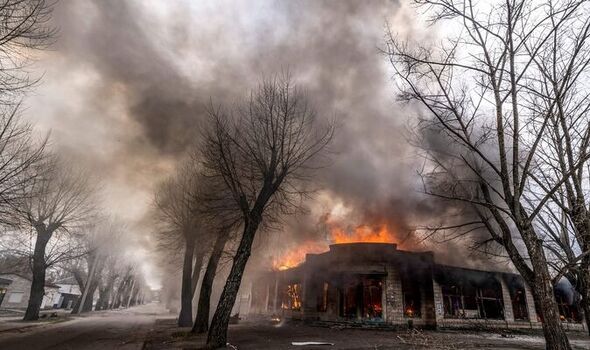 After suffering failure taking Kyiv,Vladimir Putin is believed to want some kind of success on May 9 when the Victory Day parade is held. Moscow has shifted troops to the eastern Donbas region and Ukrainian deputy prime minister Iryna Vereshchuk said locals were being urged to leave.They faced being killed and “we won’t be able to help them”, she added.

Ukraine said Russia targeted Borivske, Novoluhanske, Solodke, Marinka and Zolota Nyva – all in the Luhansk and Donetsk regions of Donbas.

A woman was miraculously rescued from a destroyed house in Rubizhne, Luhansk.

The situation in Luhansk will be the same or “even worse” than in places such as Mariupol and Bucha, the area’s governor has said. Serhiy Haidai fears a major attack within days.

He said Russian troops were “not concerned about people’s lives” and would “destroy everything that stands in their way”. But Western sources suggest the Russians could come unstuck trying to take control of all of the Donbas, whose two regions were partly controlled by Russian-backed separatists from 2014.

An official said they will not have a “significant advantage until they have brought those wider forces together”.

But pressure for some sort of victory on May 9 could lead to a setback.

The source added: “As we saw in the first phase of the campaign, when you have a political imperative which drives things, you can end up with a military disaster.”

But Nato chief Jens Stoltenberg warned the war could last “for years”. He said Putin had not dropped “his ambition to control the whole of Ukraine”.